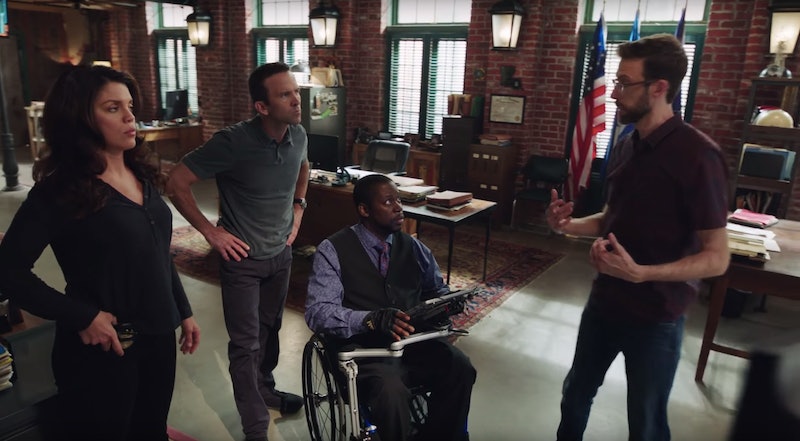 In recent years, so many viewers and creators have pushed the entertainment industry toward inclusion. While this has resulted in new, exciting stories on screen for marginalized groups, progress has been slower for people with disabilities. The discussion around disability and representation has become more mainstream, sure, but the issue is still often sidelined or dismissed. Throughout my entire childhood, I never saw anybody like me on television. For decades, Hollywood has failed to produce movies or television with complex disabled characters, and for a long time, it felt like characters who used wheelchairs or other mobility aids simply did not exist outside medical pamphlets. Even worse, the limited representation available is dominated by sob stories, which perpetuate harmful tropes about disability, and these projects rarely feature actors with disabilities in the starring roles.

As a wheelchair user myself, I can easily notice how artificial an on-screen story feels when the actor doesn’t actually use one in real life. Moments like this only further prove how many movies featuring people with disabilities are not made for disabled people. Instead, they aim to make abled viewers pity people with disabilities, rather than understand their experiences better. Authentic representation matters, and when creators get these stories wrong, it manifests in how society views disability.

Back in January, Bryan Cranston portrayed a man who's a quadriplegic in The Upside, a film about a wealthy man and his caregiver. The movie reignited the conversation around casting able-bodied actors in roles about disabled characters. While Cranston defended the casting as the studio's business decision in a Yahoo! News interview, he somewhat acknowledged how this is problematic, explaining, "I think it points out the lack of diversity in disabled actors and the lack of opportunity in order to be even considered to play the lead role in a film like this."

Of course, the debate over casting and disability is multi-faceted, and it's not unique to The Upside. For instance, in 2018's Skyscraper, Dwayne Johnson plays an amputee. Eddie Redmayne took home multiple awards for portraying wheelchair user Stephen Hawking, who had ALS, in 2014's The Theory of Everything. And in 2017, Keir Gilchrist portrayed a teenager on the autism spectrum in Netflix's Atypical.

In 2017, the Ruderman Family Foundation, an organization that promotes the inclusion of people with disabilities in media, published a study showing that while 20% of the U.S. population has a disability — some 5 million people — only 2% of characters do on screen. Furthermore, 95% of TV characters with disabilities are played by non-disabled actors, according to the study, and the numbers are equally dismal in film. According to USC's Inequality in 800 Popular Films report, only 2.4% of all speaking or named characters had a disability from 2007 to 2015. This means a large community remains unrepresented, and actors with disabilities are often left unconsidered for jobs they're uniquely qualified for.

In 2016, Spring Awakening's Ali Stroker, who made history as the first Broadway actress to perform in a wheelchair, expressed her frustrations about the lack of inclusion in the industry. During a talk at Wagner College, she explained, "The only way to make that shift [toward improving representation] is to go out and do it, to be the representative. That is a huge motivation to keep going when I'm still getting turned down from auditions because of my chair. It's still happening, people are still not comfortable, not open."

"I want to play a complex character that isn’t a stereotype."

Of course, actors with disabilities don't just want auditions; they also want to be considered for roles that are complex and nuanced, as would any other star. Shannon DeVido is an actor and comedian who's made television appearances in Difficult People and The Nightly Show with Larry Wilmore. She's also a wheelchair user, and during a phone interview, she stresses a desire to play three-dimensional characters. "I just want to portray characters that are everything from super likable to unlikeable to annoying, anything that is just not solely about my disability," DeVido says. "I want to play a complex character that isn’t a stereotype."

But in order for there to be progress, viewers need to recognize the injustice in the first place. "You’re saying you’re interesting and sad enough to tell your story, but you’re not good enough to be in the story," DeVido says, explaining the importance of putting people with disabilities in charge of their own narratives. "You’re taking away a voice."

"We often are left out of training programs or lack financial or accessibility resources to live in a major city," Yates says, noting that the film and TV industries are predominantly based in metropolitan areas, such as New York or Los Angeles. That's why, she says, "national casting searches are imperative." Yates also notes that sets can be made more accessible by hiring acting coaches to address additional obstacles an actor with a disability may face during production. These resources are not uncommon for able-bodied actors — as Yates says, "most of the stars have them on set or in preproduction" — so there's no reason such accommodations shouldn't be industry standard.

And if you think it's not possible to fix things, look no further than recent shows that have gotten it right. In April 2019, NCIS: New Orleans' episode "In Plain Sight" modeled exactly how to make a story with disabled characters more inclusive. The episode featured disabled veterans, and the studio brought on nearly 30 actors with disabilities, including background actors and stunts.

NCIS writer Katherine Beattie, a wheelchair user, penned the episode and says casting was not difficult in a recent phone interview with Bustle. The team had a pool of talent to hire from and even opened up opportunities for actors who didn't make the cut. "We watched 15-20 tapes for the villain, which was far more than we would normally watch for an episode, but the casting director wanted us to see everybody," Beattie recalls. While only one of those actors actually got the role, the others got their tapes seen by the casting director and LeVar Burton, who directed this episode. Beattie also noted that showrunner Chris Silber was "instrumental" in the casting outreach. That visibility is crucial, offering the chance to be considered for future castings.

In addition to NCIS, Speechless provides yet another model for inclusion, as people with disabilities write, produce, and star on the ABC series. For many, the show offers insight into the challenges people with disabilities face, from finding accommodations at school to navigating relationships, and has been recognized for its valuable disability representation by fans and advocacy groups alike.

There's a long way to go until the full breadth of disabled experience is portrayed in TV and film. The small amount of disability representation still skews significantly white and male, and there can also be more diversity as far as the type of disabilities shown, including people who use a power wheelchair versus a manual one. Still, as Yates, Beattie, and DeVido share, there are things the industry can and should be doing to represent the 20% of the population often left out on screen. When people with disabilities are given control over their own narratives, it allows these stories to truly feel authentic.

More like this
The Sean Bean Intimacy Coordinator Controversy, Explained
By Sam Ramsden
At 28, Lesley Manville Was Acting, Picketing, & Singing Kate Bush Songs
By Olivia-Anne Cleary
What's New On Netflix: A Third '365 Days' Movie & Lili Reinhart’s New Film
By Arya Roshanian
The First Trailer For Zac Efron’s 'The Greatest Beer Run Ever' Is Action-Packed
By Charlotte Moore and Sam Ramsden
Get Even More From Bustle — Sign Up For The Newsletter