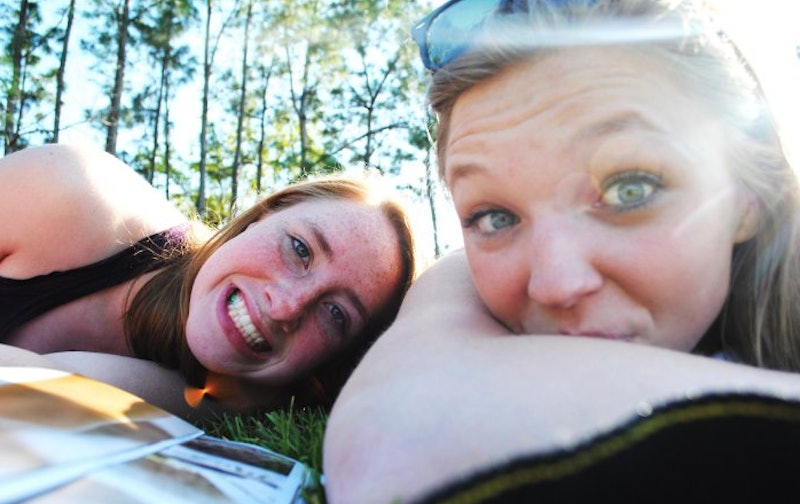 These days, when I sit on my couch and try to sink into the pleasure of doing nothing, my eyes often drift to a certain spot on my staircase.

As much as I try to focus on whatever I'm doing, I'm gradually tugged to those dull, gray stairs. At first, the pull is gentle — like the lightening-flash thought you have when go on vacation and think you forgot something, but can't place just what. But then that tiny thought gradually becomes something bigger, more insidious, bubbling and churning to a dull panic in your gut. It is the feeling of wondering if you left a candle burning turning into the panic of being utterly convinced you did. It is imagining your house burning down, everything you once knew going up in flames. Except in this case, there is no eventual realization that everything is fine — that the candle is blown out, that my house is safe. There is only the realization that everything did burn down, once. There is only the memory that on a Friday in November, that staircase shifted from being any old place to the place I was when I lost my best friend.

Since childhood, I have had three best friends; there were never favorites. Individually, they were each my best friend. As a whole, they made up my best friend, too. We were as much one entity as we were separate people. So it made sense that one of us would be the person to tell the others if one of us was suddenly killed in a car accident on a Friday afternoon. It made sense that we would sit in our separate corners of the world, me on my staircase in Manhattan, them in Philadelphia and Atlanta, wailing to each other on a three-way call, hardly speaking at all. It made sense that I would have to call my mom as I rocked on the floor, screaming, "What do I do?" into the receiver. What I learned very quickly, though, is that the practicalities of death spare no one.

In the hours and days that followed, that practicality — the knowledge that I still had to live life — felt mocking and cruel. That first night, I hung up the phone with my mom and went to take a shower, only to stop and think, "How do I do this now?" To do something so mundane seemed absurd, like eating an ice cream cone in the middle of nuclear fall-out.

I tried to ignore the absurdities and focus on what was helpful after that — putting together photos, playlists, writing a eulogy I knew would never be good enough. Re-writing it. Telling her ex-girlfriend what had happened. Getting plane tickets back to Florida. Letting our high school classmates know about the funeral. I laser-focused on the things that had to happen, until I suddenly got to a certain practicality that stopped me in my tracks: I had to find something to wear to the funeral.

When Ashleigh died, part of me disappeared. I thought that this missing part would mean everything was different, that me-before would be unrecognizable to me-after. In some ways, that was true (and still is). So, when I realized I had nothing black, nothing right to wear to the funeral and I cared, I started to panic in a way that had nothing to do with the clothes at all. That I still was thinking about what I put on my body horrified me. I was prepared for a new me, one that moved through the world differently. I wasn't prepared for realizing that me-after was, at the core, still me.

When I shopped online for something that would make me feel comfortable and confident enough in to deliver a eulogy that would do Ashleigh justice — one that old classmates, my family, her family, and strangers would hear, I felt sick. I found myself pushing away thoughts of what was actually happening and, instead, researching if fake eyelashes or waterproof mascara were better for heavy crying. I bought both just in case. I bought black flats because I didn't have the right shoes. Black tights because the dress I chose felt too short. And throughout all of this was the voice in the back of my mind that said firmly, "How dare you." I felt narcissistic, selfish — ill with self-loathing. Still, every second I spent hating myself was one less second I had to feel the weight of what was happening.

On the morning of the funeral I started getting ready four hours before I had to leave, spending triple the time on my hair and makeup than I normally would. I still ended up being ready an hour early, pacing the length of my parent's house — the house Ashleigh and I had spent thousands of hours in, doing everything and, more often, nothing at all. I was impatient. I re-checked my lipstick, I re-did my eyelashes. I performed every beauty and fashion habit and hack I knew of — not yet realizing that what I was really doing was calming myself down a way that I often do, with the beauty rituals I know and love.

The truth is that there is no amount of anything that can prepare you for walking in a church and seeing your best friend laying in a coffin. For watching your best friends openly weep. For referring to someone in past tense. It is the type of pain that makes you feel like you are burning up, like the hurt is crawling out from your chest, fighting the whole way as if even it knows it shouldn't be there in the first place. People survive loss all the time, but in the moment, even that doesn't ever convince you that you will. In the same moments you are actively surviving, it often feels like you're just inching toward exploding from the pain and disintegrating into nothing at all. The pain knocks you down, drags you some place you've never been before, and leaves you there to die. But you don't. All that matters about surviving is that you do it.

My time spent obsessing over the perfect outfit and makeup was an easy, familiar way to distract myself from and get through a type of pain I didn't recognize, couldn't categorize, wasn't able to diagnose and treat. There's not a guidebook on the exact things to do directly after you lose someone — no step-by-step day planner on how to live correctly. There is only you, the pain, and the next second.

Even though I can now recognize the ways in which I've started to heal (both big and small), the guilt of focusing on myself instead of my friend envelopes me every moment. "How dare you?" that same voice still whispers in the back of my head.

How dare you care about clothes and makeup?

How dare you write about yourself?

How dare you feel better?

How dare you be alive when she isn't?

I think about these questions often. When I go to work, book a trip, pet my dog, get my nails done, call my parents. When I look at that staircase and replay that night, the pain. But, these days, what often comes to my mind next is one of the very last things Ashleigh ever sent me, something I included in her eulogy. It was a quote from a book and what it said is, "...you are not meant to just survive, to stay stagnant, to settle; you are meant to keep growing and thrive. Just like the tree that sucks up nutrients, water, and sun grows to its tallest, mightiest height and drops stuff all over our yards that will then spawn the next generation of trees...you too are meant to reach your fullest expression of the you that is you, to inspire and birth awesomeness in others, and to use whatever resources you need along the way."

When everything you know burns down, there is only the option of surviving, and using whatever resources you need along the way to do so. For me, without realizing it, that was focusing on "trivial things" — on beauty rituals that distracted me as I prepared for an event that was unimaginable to me. But then, and still now, there is always the option of lying down and doing nothing, and sometimes I entertain that — giving into the million-pound sadness of it all and letting it swallow me up.

But then I think of that quote, and what my sweet friend might think of me checking out, or using what happened as an excuse to give in and resign from living life like I want to. And what I imagine then is, accompanied with a big laugh, a dramatically deep voice, some version of: "How dare you?"