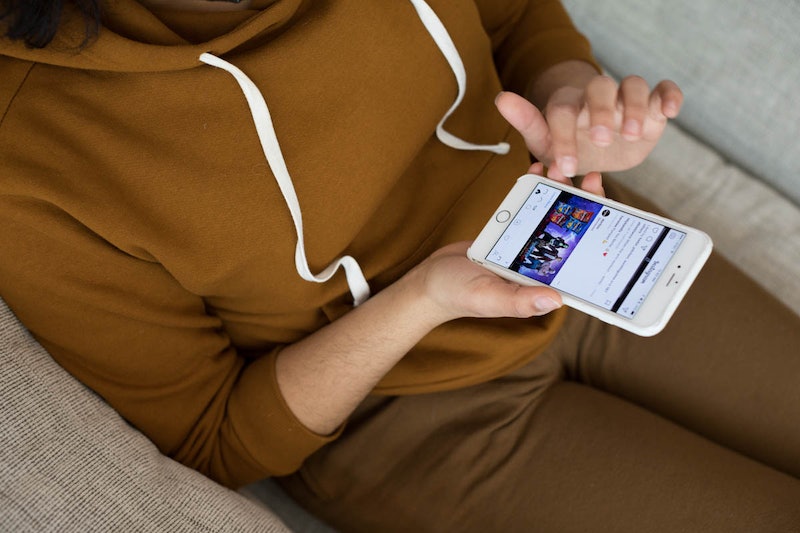 If you're one of the 15 million people living with social anxiety, then you know that receiving an invitation to a party can be more anxiety-inducing than actually attending. In fact, the cyclone of pre-event rumination that accompanies social anxiety can be downright debilitating. Could getting rid of negative thoughts reduce social anxiety? According to a new study published in the Journal of Behavior Therapy and Experimental Psychiatry, results are promising.

OK, you're probably thinking something like, "If I had the ability to control my thoughts, I wouldn't have social anxiety in the first place." I get it. Who's going to be there? Will there be parking? What if I don't know anyone? What am I supposed to wear? Pre-event rumination is, for me, one of the most debilitating parts of social anxiety, and worrying about things like this can be so overwhelming that sometimes (OK, most of the time) I cancel plans just so I can get some space back in my brain. It turns out, though, that there might be a way to stop the rumination.

Two researchers, Matthew Modini and Maree Abbott, from the University of Sydney in Australia found that banning pre-event rumination using metacognitive therapy techniques could greatly increase quality of life for those living with social anxiety disorder (SAD). During the study, participants with SAD were told that they would be required to give a speech in four days. They were then randomly assigned to either an intervention or a non-active control group.

Those in the intervention group were instructed to ban pre-event rumination using a metacognitive therapy technique known as detached mindfulness, a practice that suspends conceptual processing and helps you disengage from biased thinking. The group that engaged in the practice reported "reduced frequency, uncontrollability and distress associated with pre-event rumination, compared to the control group," the study found.

Over the past few years, mindfulness has been touted as the solution to almost everything, and one of the reasons it works so well is because it's all about staying in the present moment. Detached mindfulness, according to the counseling center at James Madison University, is "a state of awareness of internal events, without responding to them with sustained evaluation, attempts to control or suppress them, or respond to them behaviorally." Basically, it's about acknowledging your thoughts and releasing them before they take over — as if your thoughts were floating by in a river you were looking down on. (Cheesy, but it's a helpful way to think about it!)

While worrying about some things — like whether or not your apartment door is locked at night — are designed keep you safe, worrying about other things can hold you back. For people with SAD, there's no greater feeling than the joy of canceling. But, canceling your life because of SAD means you might miss out on some pretty great opportunities.

Despite knowing this intellectually, it takes a dedicated detached mindfulness practice to rewire your brain and rid it of negative rumination. If you want to take back your life, it's worth taking up detached mindfulness for 30 days to see if you stress less before social situations. Headspace is a helpful meditation app people swear by, or your therapist can help you find another kind of practice. You're not alone in having social anxiety, and there are techniques to help manage it.