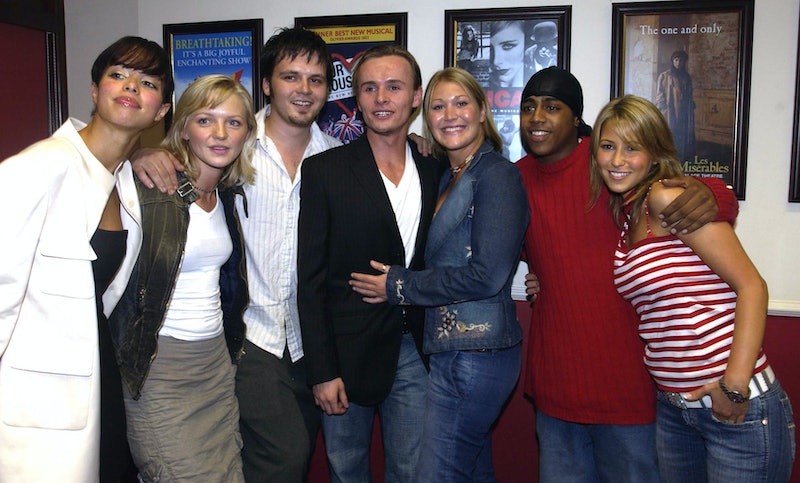 Not to be dramatic, but the best thing in the world is happening — and soon. That's right. Some absolute genius had the excellent idea of reuniting Peter Andre, B*witched, 5ive, S Club, Blazin' Squad, and just about everyone else from your school disco playlist, for a '90s throwback tour. Set to take place at venues across the country, the aptly named Stepback! 90s Tour might well be the most fun music event of 2019. You won't wanna miss out. so here's how to get tickets to the Stepback! '90s Tour, as new dates have just been added.

As the Mirror reported on March 12 2019, if you play your cards right, you'll be taking the ultimate trip down memory lane, as the Stepback! tour is set to come to a city near you. As the tour's promoter Dan Nelmes told the paper:

"The appetite for nostalgia has never been stronger, and we are thrilled to present this full on throwback fest across UK Arenas this autumn. This tour promises to be a massive hit."

You can bag yourself a ticket from the usual suspects, including Ticket Master, whose tickets start at just below £50. If your city has sold out, then fear not. Another wave of tickets will be sold on the site at 10 a.m. on Friday, April. 12. So, set your alarm accordingly.

The tour will find its first stop at the Motorpoint Arena in Cardiff on Nov. 2 2019, it'll then head northbound to the Utilita Arena in Newcastle Upon Tyne on Nov. 9, before landing in Scotland at the SSE Hydro in Glasgow on Nov. 29. Stepback! will have its penultimate show by the beach, as it's due to arrive at The Brighton Centre in Brighton on Nov. 29, before heading back up north for its final night at First Direct Arena in Leeds on Nov. 30.

Seven more cities will be added to that list, including London, Milton Keynes, Birmingham, and more, as seen on an official poster which Stepback! performers Blazin' Squad posted on their Twitter on March 30. So, you've hardly got any excuse to miss it. One of your throwback faves is bound to be somewhere within the tour's sprawling lineup.

As Chronicle Live reported on April 1, X Factor's Shayne Ward and Atomic Kitten have been added to the lineup, which also features nostalgia-bait names like Five, B*Witched, Fatman Scoop, S Club, Blazin' Squad, and East 17. So, even if you are missing out on Glastonbury Festival this year, you can tell your pals who are planning on pitching a tent in the Somerset mud that, while their line up is fine, you're getting to see 'Crossroads,' 'Whole Again,' and 'Never Had a Dream Come True' back to back. And really, does live music get any better than that?

Head to the tour's official website to find all available tickets. Because, for real, you want to miss what will inevitably be one of the best nights out of the entire year.