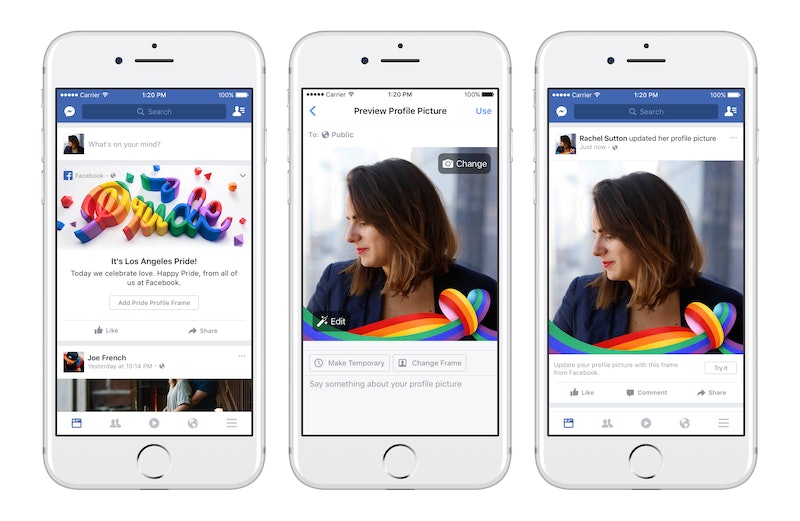 One of the benefits of social media is its ability to unite people, globally, around a single cause or celebration. June is Pride Month, and you may have noticed your friends using a new reaction to show their support. Here's how to get the Facebook Pride reaction to virtually show your love for the LGBTQ community. In the Trump era, it's more important than ever for people to band together to show support for all aspects of human rights, and this little rainbow reaction is one way to do that.

More than "12 million people across the globe are part of one of the 76,000 Facebook Groups in support of the LGBTQ community, and more than 1.5 million people plan to participate in one of the more than 7,500 Pride events on Facebook," Alex Schultz, Facebook’s vice president and executive sponsor of pride@facebook, said in a press release.

If you want to add the rainbow flag to your reactions, it's super simple. All you have to do to get the flag to appear in your reaction toolbar is log on to Facebook and like the LGBTQ@Facebook page. It's that easy! In addition to the sticker you can also use Pride profile photo, camera, and messenger features.

LGBTQ activist Gilbert Baker created the iconic ROYGBIV flag in 1978 as a symbol of visibility, and the flag has since become an international sign for the LGBTQ community.

After being discharged from the U.S. Army, Baker, who died on March 31, 2017, taught himself to sew; at the request of gay rights activist and friend Harvey Milk, he often created protest banners on demand. Milk rode under Baker's first Rainbow Flag on June 25, 1978 at the San Francisco Gay Freedom Day Parade, according to Baker's website.

Baker moved to New York City from San Francisco in 1994, and created a mile-long Rainbow Flag for the 25th anniversary of the 1969 Stonewall Riot. The flag measured 30 by 5,280 ft., and was carried by 5,000 people, breaking the world record for largest flag.

Now, in the age of social media, you can share your Pride online for the 47th annual Pride celebration, and people aren't wasting any time spreading the love.

With Pride events underway around the world, including the June 11 #ResistMarch in Los Angeles, there's plenty of things to apply your rainbow reaction to.

“Our commitment and support of the LGBTQ community has been unwavering,” Schultz noted. “From our support of marriage equality and bullying prevention, to the many product experiences that we’ve brought to life, we are proud of our attention to the LGBTQ experience on Facebook, often thanks to the many LGBTQ people and allies who work here.”

Personally, as a member of the LGBTQ community, I think the rainbow reaction should be a permanent fixture on the reaction toolbar because it's important to support Pride every day. While there's no confirmation about whether this reaction will disappear after June, you can spend the rest of the month rainbow-liking everything. Because, Pride!