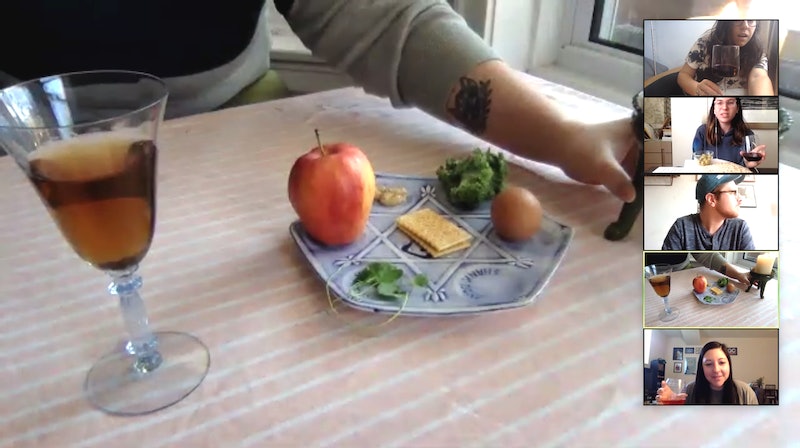 About this time last year, Julia Logan took an intro to Judaism class at her local synagogue. The group of seven people organized a Passover seder together, reading from a social justice-rooted Haggadah. This year, Logan says, five from that original group will celebrate Passover on Zoom.

Government mandates to stay at home to fight the spread of coronavirus have impacted nearly every facet of our lives, from jobs, to relationships, to weddings, to funerals. But Passover stops for no virus. The holiday, which marks the freeing of the Israelites from slavery after a series of 10 plagues, is traditionally celebrated at home with family and sometimes close friends — think, bringing your bestie home for Thanksgiving. There’s a (long!) reading from a prayer book, the Haggadah, a meal rich with literal and figurative schmaltz, and the evening culminates in a hunt for a hunk of matzah. It’s a very active, IRL kind of celebration.

Jewish Millennials who aren’t currently social distancing with their families — or whose families don’t always observe Passover — are getting creative with how they’re celebrating the holiday, which starts the evening of April 8.

Logan is now a field manager for OneTable, an organization that provides resources to people in their 20s and 30s who want to observe Shabbat. This year, over 400 people have signed up through the platform to host virtual seders this year across 45 cities, according to Al Rosenberg, OneTable’s Director of Strategy & Communications. OneTable's sister site, Seder2020, has 200 dinners planned.

Rosenberg says that celebrating Passover online can give people space to determine what their “adult version of Judaism looks like,” including “what rituals you want in your life and what you want your relationship to Judaism, spirituality, or wellness to look like on a larger scale.” They add, “The beauty of Passover is that there's multiple nights,” so you can plan multiple celebrations with whoever you like, however you like.

Being together might feel great in the moment, but that would not last longer than a few hours.

Emily, 24, will be celebrating with her family over Zoom, with her uncle “hosting.” She says they haven’t really worked through the kinks of how they’ll take turns reading the Haggadah, since she doesn’t have one at her apartment. “As for the Afikoman,” the aforementioned hunk of matzah, she says, “my family is pretty lame at hiding it (they put it in the same spot for like five years in a row),” so she’s not sure how that’ll shake out on a video chat. “I guess the payment will have to come in the form of Venmo this year.”

Miriam, 26, is not down to get back on Zoom after full days of videoconference meetings. “When it comes to social interaction via digital platform, I don't have anything else to give, which is unfortunate because I love Passover,” she says. She had been planning to go to her best friend’s family’s seder, and an elderly client of hers had also invited her to join her family’s celebration in Westchester. ”The idea of kicking back and enjoying this very special dinner on a digital platform with people just doesn't seem like it would deliver the same effect as it would normally.” Still, she says she might do a small FaceTime with her two best friends, who are currently based in Mexico City and Israel. “That is what I consider to be my Jewish community,” she says.

As Logan puts it, you can decide to throw together a virtual seder last-minute — it’s not like you need a headcount for the brisket. If you do decide to host, send out the logistics — the Zoom dial-in, the link or .PDF of the Haggadah — in an email in advance to minimize people texting you questions. Logan recommends assigning one person the role of the Afikoman, Clue-style, and having everyone guess who that person is, rather than physically hiding it. (“Have them make Matzah-infused jokes” she says.) After the meal, since you can’t fake yawn and say you need to get home, Logan suggests closing the night by asking each guest to say one thing they’re grateful for — or, alternatively, breaking into a Prince of Egypt-themed dance party. “Maybe the Whitney Houston & Mariah Carey version of the song.”

Even if a digital Passover won’t be the same as a dinner, both Emily and Miriam affirmed the value of staying home and marking the holiday in your own way.

“Being together might feel great in the moment, but that would not last longer than a few hours,” Emily says. “The possibility of passing germs (especially to my grandmother) would be a big mistake.”

“In order to feel more comfortable with the way events are playing out … you need to have those little wins,” like doing what you’re comfortable with on Passover, says Miriam. “That on its own would make me feel like I've recharged my Judaism.”

More like this
26 Ghost Story Podcasts To Get You Ready For Halloween
By Jessica Booth, Mia Mercado, JR Thorpe and Emma Carey
9 Tips For Hosting A Holiday Party In A Small Apartment
By Anna Davies
How To Turn Off Night Mode On Your iPhone Camera
By Emma Carey
Behind The Hilarity Of The "POV: You Walk Into My Room" TikTok Trend
By Lexi Inks
Get Even More From Bustle — Sign Up For The Newsletter