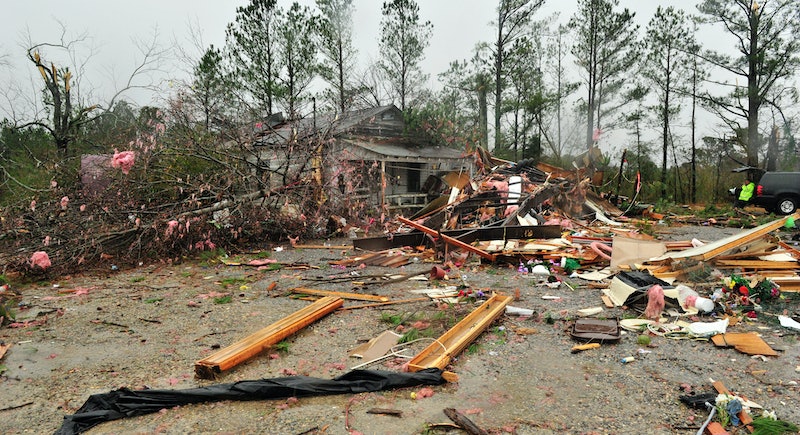 Vast swaths of the South were left unrecognizable on Sunday after violent storms and tornadoes swept through the region. At least 23 people were killed in Alabama alone, making this the deadliest storm to hit the state in years. Add to that the property damage, and the effects of the storm will be felt for some time. Knowing all that, here's how you can help Alabama and Georgia after the tornadoes — because they're going to need it.

Meteorologists are still parsing out exactly when and where tornadoes struck, and how strong they were. A storm survey will be held Monday, Accuweather reported. People on the ground had a look firsthand, with mile-wide stretches totally flattened. A sheriff told local news channel WRBL that the damage is "incredible."

First responders, meanwhile, are going back Monday morning to look for survivors, The Weather Channel reported. And Lee County Coroner Bill Harris told AL.com that there would be people taken out of the rubble all night Sunday into Monday.

The most pressing way to help, therefore, is by donating to a group that's always on the ground first thing in a disaster — and these tornadoes are no different. WRBL reported that the Red Cross is sending teams out Monday morning to check the needs of survivors, and provide the help that they need. You can donate online or by calling 1-800-RED-CROSS. Texting is an option, too. Sending REDCROSS to 90999 gives the organization $10; the amount will be added to your wireless bill.

Another really powerful commitment would be to sign up as a Red Cross volunteer. You wouldn't necessarily be sent out first thing with this disaster, but they would know to count on you in the future. According to the organization, 90 percent of the aid workers on the ground are volunteers.

In the days to come, local charities will be taking action also. AL.com has already started running through some of the efforts in the area that can make a difference, from giving blood to reconnecting families who have been separated. Decide what you connect with most and donate your time or money to it. People from the community are stepping up to provide shelter, pet boarding, and more.

Others affected by the storm have already created their own GoFundMe campaigns to cover the costs of the recovery. You can browse through a number of fundraisers created in recent days to find the one that seems to match most with the kind of giving you're interested in.

Sending well wishes is not to be discounted, either, and they've been coming in from across the country and the world. "To the great people of Alabama and surrounding areas: Please be careful and safe. Tornadoes and storms were truly violent and more could be coming," President Donald Trump tweeted on Sunday. "To the families and friends of the victims, and to the injured, God bless you all!"

And from a little further afield, President of the European Parliament Antonio Tajani also sent his best wishes. "Deeply saddened by news of deadly tornado in #Alabama," he wrote on Twitter. "My thoughts and prayers with families of victims and with the United States." Given the level of devastation, he could be the first of many.

Consider these ways — and more — to help those affected by the storms. They need it.