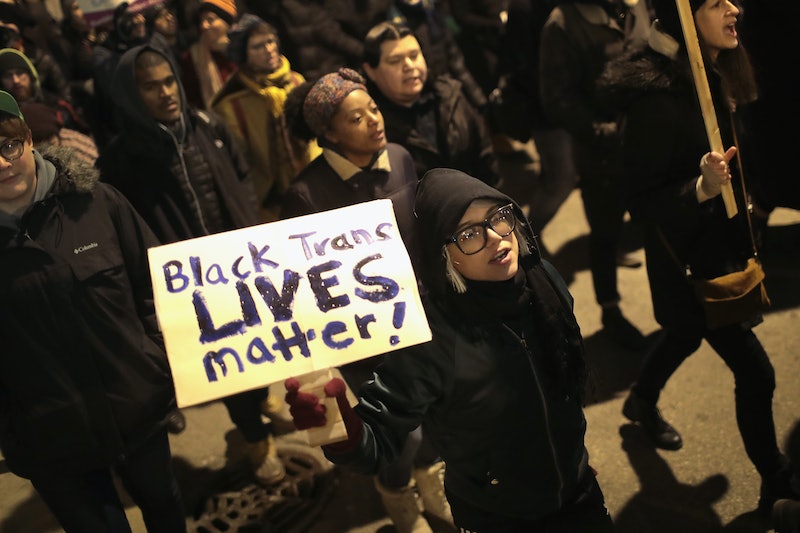 On Jan. 24, a black transgender woman was shot and left for dead in a gas station parking lot in Houston, and police are still on the hunt for a suspect. If you'd like to help Candice Elease Pinky as she recovers from her attack, her friends have set up a fundraiser for her, according to the page, and it's currently accepting donations.

Police say that the shooting took place around 11:00 a.m. Surveillance footage of the attack acquired by ABC 13 shows the shooter chasing Pinky around the parking lot and firing several shots at her in broad daylight with may eyewitnesses present. Police say the suspect fled in a light-colored SUV that may have been a Honda, the Houston Chronicle reports, and described the suspect as a black male around 5'8" tall in gray sweatpants and a gray hoodie. Although Pinky's exact condition after the shooting is unclear, the organizers of her fundraiser say on the page that she is in recovery.

As many LGBTQ activists pointed out after Pinky's shooting, transgender people face unspeakably high levels of violence in America and abroad, and their attacks often aren't covered in the mainstream media. According to the Human Rights Campaign, more trans people were murdered in 2017 in America than in any year before, while hundreds more are murdered around the world every year. The vast majority of these victims are people of color: HRC reports that between 2013 and 2017, 86 percent of trans murder victims were Black, Latinx, or Native American. During one three-week period in 2018, five trans women of color were murdered across the U.S., according to HRC.

Victims of anti-trans violence are often misgendered by police, the media, or both, and that's exactly what happened after Pinky was shot. According to the Advocate, police had initially identified Pinky as a woman but then changed their description based on her driver's license, which referred to her as a 24-year-old male. The Houston Chronicle initially misgendered her as well, the Advocate reports, but corrected itself after drawing criticism from several local LGBTQ activists.

"Unfortunately, this is a story that plays out far too often in our community," the Transgender Education Network of Texas said in a statement on its Facebook page about Pinky's identification. "Due to the complicated process and financial barriers that our community face when changing our identification to match who we truly are, many of us do not have the means or access to be able to have a state-issued license or ID that identifies us correctly as who we are."

The fundraiser for Pinky has raised over $7,700 for her recovery as of Thursday evening. On its Facebook page, the campaign's organizers called Pinky a "beautiful soul" and pleaded for unity and an end to violence against LGBTQ people.

"How many LGBT souls are going to be lost or damaged before people finally see that we all bleed the same?," the organizers wrote. "We are all humans, only humans & we can only do so much during our time on Earth so why waste the few years we have hating & mistreating one another when we could do better & radiate positivity."

More like this
Chris Kaba's Family Continue Fight For Justice After Viewing Police Bodycam Footage
By Sophie McEvoy
Black History Month UK’s 2022 Theme Calls For Action, Not Words
By Maxine Harrison
Women Around The World Are Cutting Their Hair In Solidarity With Mahsa Amini
By Darshita Goyal
Mel B Speaks Out Against Domestic Violence In A Powerful Speech
By Sophie McEvoy
Get Even More From Bustle — Sign Up For The Newsletter