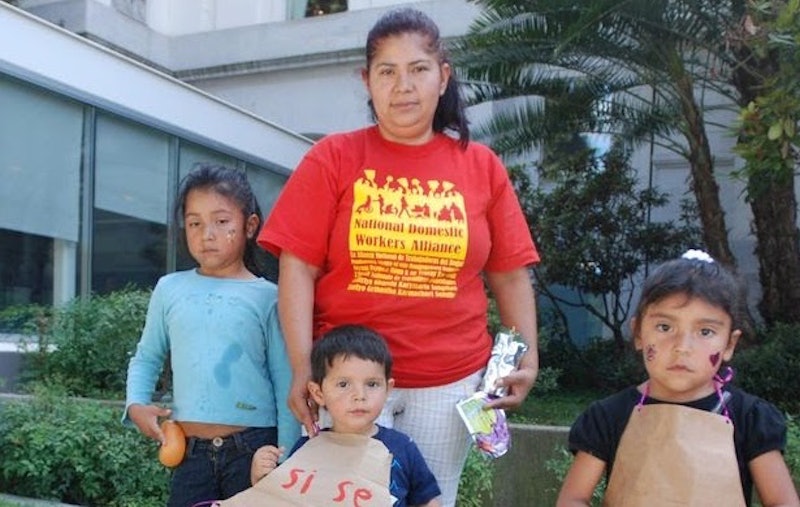 June 16 is International Domestic Workers Day, and it’s a day of recognition for over 67 million domestic workers around the globe who cook, clean, provide child and elder care, and perform countless other invisible jobs for families.

Let’s be honest: Every day is International Domestic Workers Day. Every Monday when a nanny cradles a baby so the parents can start the week at their other jobs, every Tuesday when a home care worker spends time with an elderly loved one to keep them healthy in their home, every Friday when a housecleaner cleans a house after a hectic week so a family can enjoy the weekend mess-free.

Eight years ago, an unprecedented international law was passed: the International Labor Organization Convention 189 for Decent Work for Domestic Workers, which has now been ratified by 27 countries (the U.S has yet to ratify). Domestic workers from around the world organized together to achieve a historic step forward toward domestic work being recognized as work equal to any other, through establishing a framework for labor protections for their workforce.

This law is so important because domestic workers are in every country, the economy relies on them, many families depend on them, and yet they are some of the most undervalued workers in any economy.

The vast majority of domestic work is performed by women (mostly women of color), behind the closed doors of private homes, making them uniquely vulnerable to poor working conditions, wage theft, and verbal, physical, and sexual abuse. Domestic work, which is often done by women of marginalized social status, has long been considered unskilled or unprofessional labor because of its association with “women’s work.” The treatment of domestic workers around the world is illustrative of how little this work is valued, but in fact, this is the work that makes all other work possible.

Domestic work is the ultimate behind-the-scenes labor that keeps our economy and society running. Everyone, whether we employ domestic workers or not, depends on it.

That is why International Domestic Workers’ Day is a holiday we all must honor — and the best way to do so is by doing our part to ensure domestic workers are treated with the respect they deserve, today and every day. We can celebrate this global movement and take simple steps in our lives to move us all forward toward a world of dignity and equality.

When most of our country’s labor laws were being designed, domestic workers were deliberately left out. Workplace standards like overtime pay or meal and rest breaks were rarely extended to domestic workers, if at all. All of theses exclusions created a breeding ground for exploitation, where issues like sexual harassment and lack of safety on the job have become a rule rather than an exception.

That’s why domestic workers and employers are paving the way for the National Domestic Workers Bill of Rights, the first federal legislation to protect the rights of domestic workers across the country. Nine states (and the city of Seattle) have passed Domestic Workers Bills of Rights. Now it’s time for all 50. Sen. Kamala Harris and Rep. Pramila Jayapal are co-sponsors, and it’s expected to be introduced into Congress sometime this year. Having national workplace laws to protect domestic workers will make good working conditions a general standard rather than relying on the goodwill of an employer.

Everyone deserves a living wage — not just a minimum wage. In most places, the minimum wage is not high enough to sufficiently support domestic workers and their families. Seventy percent of domestic workers are paid less than $13 an hour, and most do not receive pension benefits or health insurance.

Hand in Hand, a national network of employers of domestic workers, recommends $15-$20/hour. Take into account where you live, if the person is doing extra work, and if they have a long commute. To help determine fair wages, check out the living wage calculator for your area.

One of the most difficult challenges to domestic workers is the lack of access to benefits. Paid time off, life insurance, and accident insurance are all benefits that most of us expect through our employers. But domestic workers typically don’t receive benefits through their work. If they are sick and unable to work they lose pay, they don’t have access to insurance that can protect their income in case of accident or disability, and they typically don’t get any vacation.

If you work, you deserve benefits, no matter what kind of work you do. That’s why the National Domestic Workers’ Alliance has powered Alia, an online tool, making it easy for clients of house cleaners to contribute to the benefits of the person who works in your home. Alia has started with providing access to benefits for house cleaners, who typically provide service for multiple clients each week, and therefore don’t have access to benefits without a single employer to take responsibility.

They say “change starts at home,” and to support domestic workers, it really does.

Let today, International Domestic Workers Day, bring forward new levels of recognition for domestic workers. Join us. Support us. Celebrate with us. Be part of a growing force that refuses to let the work of millions go unrewarded and unseen. Together, we can move the whole world forward.