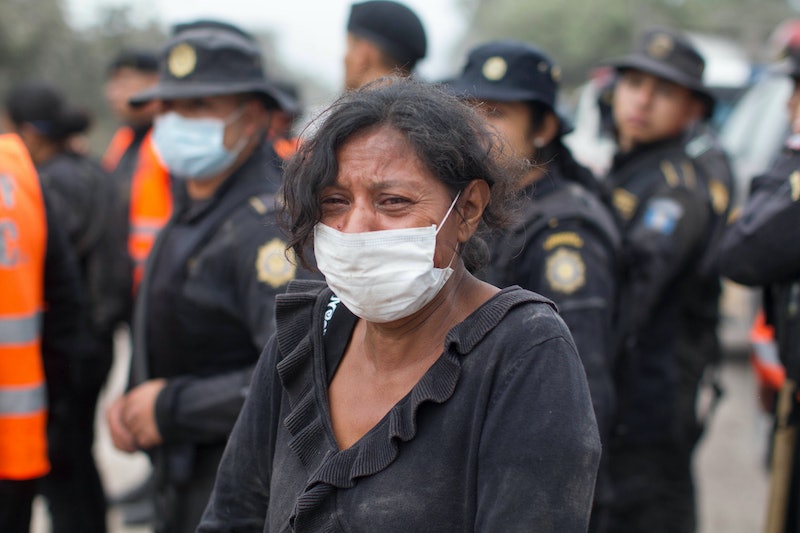 On Sunday, about 25 miles southwest of Guatemala City, Guatemala, the Fuego volcano erupted for 16 and a half hours. According to the Associated Press, 62 people have died and 3,000 others are in need of temporary shelter. As the natural disaster unfolds, you may be wondering how to help Guatemalans affected by the Fuego volcano.

The eruption shot ash, rock, and gas into the sky from one of Latin America's most active volcanic sites, according to the BBC. The last major eruption at the Fuego volcano was in 1974, but the news wire service reported zero deaths in that instance. The volcano erupted back in February as well, with ash reaching 1.1 miles into the air. Reuters reported Monday that smoke and volcanic ash was shot about 6.2 miles into the sky in this latest eruption, coating several surrounding regions.

As Gizmodo reported, the eruption also triggered a pyroclastic flow — that's a combination of hot and quick-moving rock and gas — that covered homes, cars, and villages at the southern edge of the volcano. Experts are concerned the volcano may erupt again and trigger a similar flow over the already ravaged region.

Beyond the question of structural safety, missing people and properties, and mud slides near the volcanic site, Guatemalan authorities also are warning citizens about lahars, a quickly moving volcanic mudflow. Newsweek reported that the mudflows can reach speeds as high as 120 miles per hour, while also bringing objects like a car into its rushing wake.

CNN estimated that 1.7 million people will be affected by the eruption. Rescue operations are now underway, but those living nearest to the volcano did not have much advance warning, CBS News reported. Many organizations and fundraisers are looking for aid to help those local residents most affected.

More like this
How To Follow The New Royal Family Social Media Accounts
By Sam Ramsden
All The Most Stylish Winter Wardrobe Staples You Can Buy On Walmart.com
By Jessie Quinn
The 8 Best Walking Shoes For Metatarsalgia, According To A Podiatrist
By Lauren Moison
Archie & Lilibet Are Eligible For Royal Titles — But There's A Catch
By Jake Viswanath
Get Even More From Bustle — Sign Up For The Newsletter