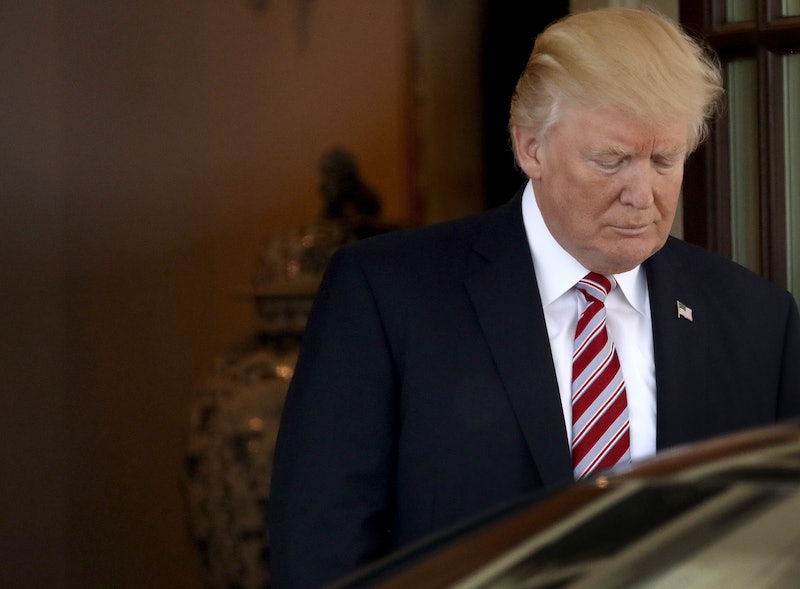 So, you're a Democrat, or simply a political progressive, and all the news about the various scandals, indignities, and controversies of President Donald J. Trump has got you feeling optimistic. After an eight-day span in which he fired former FBI director James Comey, admitted in an interview the Trump-Russia investigation was on his mind when he made that decision, reportedly gave classified Israeli intelligence to the Russians, and was accused of asking Comey to halt the Mike Flynn investigation, it's easy to see why. So, how can you help get Trump impeached?

Make no mistake, the odds are long. It's important not to develop unrealistic expectations that Trump's removal from office is imminent or guaranteed, because with the GOP in charge of both the House and Senate, nothing could be further from the truth. Throughout this ever-escalating series of scandals, despite rumors and reports of congressional Republicans getting privately antsy, there hasn't been much, if any, actual action taken.

It can't be overstated just how unlikely this is. For a president to be impeached, the House must vote for it by an outright majority of 218. As it stands now, that would demand every single Democratic vote, in addition to 25 Republican votes. There are currently 238 Republicans in the House, meaning the Democrats would have to pick off nearly 1 in 9 of them to make impeachment a reality. Then, the trial is held in the Senate, and actually removing him would be even tougher ― you'd need at least 67 votes, meaning every Democrat and at least 15 Republicans must be on board.

Basically, this is all a long way of saying that if you really want to advance the march towards impeachment, there are a few ways for you to help the cause. First, you absolutely need to support Democratic candidates at the national level over the next year and a half, because everything rides on the midterm elections in 2018.

Whether it's a matter of spreading the word informally through friends and family, or actually volunteering for a campaign in a vulnerable district, supporting the Democratic Party's congressional candidates heading into 2018 is by any measure the most concrete action you can take.

This is especially true if you live in a typically Republican-friendly state. Working to flip districts from red to blue in contentious electoral battlegrounds is the best effort towards impeachment that a progressive can undertake right now, because it's the only one that doesn't hinge on the GOP growing a spine. In short, any road to impeachment probably starts with the Democrats seizing control of the House next year ― an unlikely proposition, but far from an impossible one.

Don't forget about special elections, either. At the time of this writing, House seats are up for grabs in Montana, where Democratic candidate Rob Quist is reportedly surging late, and Georgia, where the high-profile runoff between Republican Karen Handel and Democrat Jon Ossoff is underway. Whether it's a matter of donating your time or your money ― participating in a Quist phone bank, perhaps? ― these are races that'll have an outsized impact on the national political narrative, and that matters for building momentum towards a possible impeachment.

It also can't hurt to contact vulnerable Republican members of Congress and let them know how you feel ― the better Hillary Clinton did in their districts in 2017, the more effective your call will be. Remember, when calling a representative, it's generally considered to be most effective to contact their district office rather than their D.C. office, and make sure to be polite yet firm. You can find a complete directory of the House of Representatives here, and a similar directory for the Senate here.

It may be frustrating, and even a little chilling, if Trump's various scandals worsen to the point of plain impeachable wrongdoing but the GOP refuses to act against him. But that's simply the party's prerogative right now, and however dispiriting and frustrating it might be, it's entirely within their power. They only way to change the math, simply put, is for the Democrats to start winning elections.