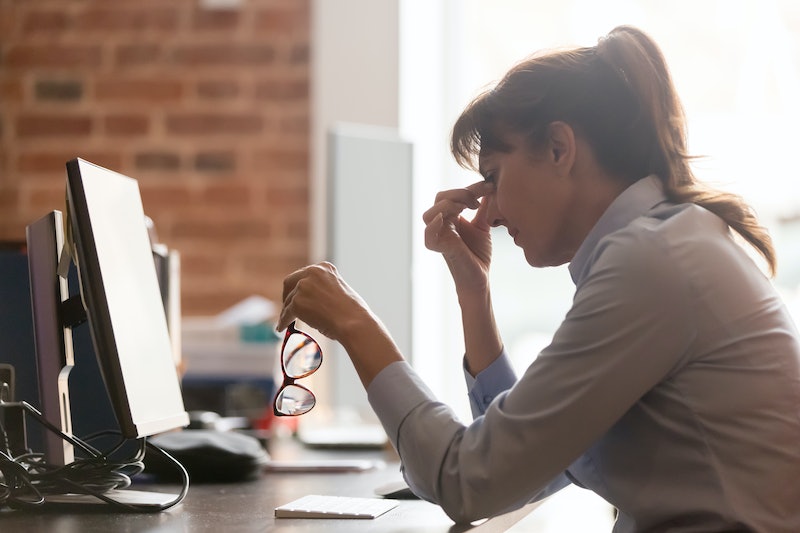 Crying at work can feel like a minefield. Women in particular can experience shame or anxiety about being seen to cry in the workplace; according to a survey by researcher Anne Kreamer, 41% of women said they'd cried at work, and a high portion of those who did worried it had impacted their credibility or standing with their colleagues. The taboo around crying at work, experts tell Bustle, isn't so much about the weeping as it is about how people react to it in a professional environment.

"Highly sensitive people or those who have trouble regulating their emotions may struggle to keep the tears at bay, especially if they feel they are being bullied, criticized, or otherwise mistreated at work," counselor Jennifer Blough, owner of Deepwater Counseling, tells Bustle. That doesn't mean they're "weak," not up to the task, or reacting in an unhelpful way. Crying is a visceral response to emotions, and all of us have our breaking points.

"Don’t tell them to get a hold of themselves," says Dr. Drexler. That reinforces that they've lost control in an unacceptable way, and shames them for their emotional response.

Instead of dismissing their emotional response, Dr. Drexler says, you can be proactive. "Ask the person if and how you can help; invite him or her to talk." If you're in a managerial position or can adjust their workload or schedule, suggest they take a few breaths or a walk and come back, she adds. That can help them feel accepted while also giving them time to move through their frustration.

Offices aren't usually private places. Professor Kimberley Elsbach, who's done extensive research on responses to female crying in the workplace, says that one of your first priorities as an observer should be to "try to minimize the disruption of crying on the work of others." That, according to her research, will help the person get their emotions out without causing career issues for them later. "We found the most negative consequences of crying at work came when the crying disrupted the work of others, so attempting to minimize these effects would be helpful to the crier," Elsbach tells Bustle.

This, she says, can be done in an empathetic and helpful way. If the person is one-on-one with you, she suggests either letting them "get it all out" in a private place with you, or postponing things while they have a little privacy. "If the crying happens in a public workspace, or in a meeting, you can help by pausing the work or meeting and helping the crying person to remove themselves from the area," she adds.

After the crying has stopped, it's important to talk about what happened and why, rather than ignoring it. "Understand that displays of emotion — including a few tears — are part of what it means to be a human, which doesn’t turn off just because we’re on the job," says Dr. Drexler. The crying episode was caused by something, and if it was work-related, it needs to be addressed at work. Is their project facing terrible hurdles? Are they under unexpected high-pressure directives? Are there interpersonal problems between coworkers? The person who cried should be encouraged to talk about it — whether that's with you, or with the people in the office who can help solve the issue.

If you see somebody crying, take a deep breath, replace your default awkward response with some empathetic strategies, and you'll make the situation far more comfortable for everybody. And offer tissues; that always helps.

More like this
25 Inspiring Quotes From Black Women To Celebrate Black History Month
By Kyli Rodriguez-Cayro and JR Thorpe
These 3 Zodiac Signs Could Write A Bestselling Novel
By Brittany Beringer
24 History-Making Black Women You Probably Didn't Learn About In School
By Ayana Lage and JR Thorpe
Ashamed Of Your Screen Time Stats? Here's How To Change That
By Alexis Morillo
Get Even More From Bustle — Sign Up For The Newsletter
From hair trends to relationship advice, our daily newsletter has everything you need to sound like a person who’s on TikTok, even if you aren’t.