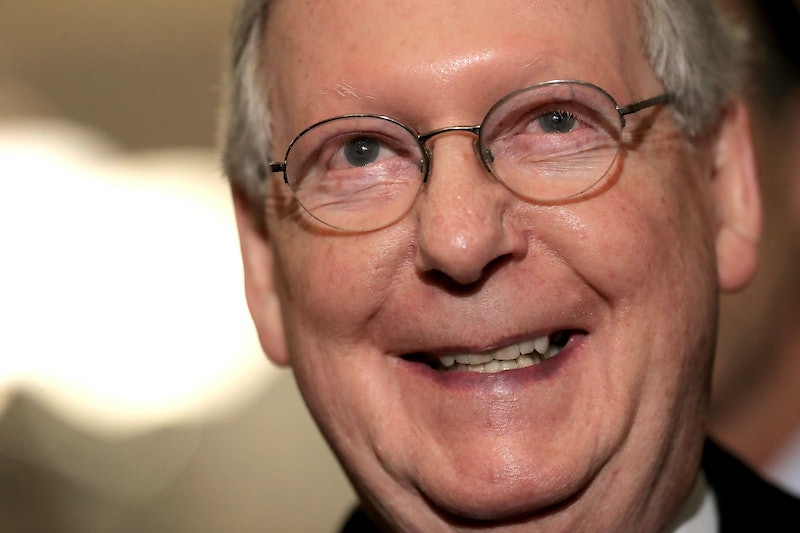 On Friday, Dec. 1, the Republican-led U.S. Senate took its first dramatic step towards passing a massive tax cut for the wealthy and corporate classes. But despite the bill making it through its first Senate vote, it's essential for progressives, activists, and advocates to recognize that it is not a law yet, and the fight isn't over ― to the contrary, action to try to stop the GOP tax bill is more essential than ever.

For progressives and concerned Americans of all political stripes, last night was a dark and grim scene all around. Many outside observers and analysts have warned that the GOP's tax cut package would have a damaging, deleterious effect on huge swaths of the American public — from students, to the self-employed, to the middle and lower classes — and that's before even considering it also takes aim at the very foundations of the Affordable Care Act, the individual mandate.

Its passage was also marked by startling and distressing breaches of how a healthily functioning Congress ought to operate. For starters, the bill was slammed through in a strictly partisan fashion. That might not be objectionable to progressives under all circumstances, of course ― the Democratic left might be a lot happier if its party had acted in similarly heavy-handed fashion when it had unilateral control of the House and Senate in the first year of former president Barack Obama's tenure, for example.

The bill was also voted on without even having been released to the public beforehand, or with senators having enough time to review its contents prior to making a decision. Some pages of the bill had hand-written amendments scrawled into the margins, in barely decipherable chicken-scratch handwriting.

Even further, it was loaded up with a mish-mash of Republican policy perks that have nothing to do with taxes, like opening up oil drilling in Alaskan wildlife preserves, or the aforementioned repeal of the individual health insurance mandate. And, of course, it hands millions upon millions of dollars back to the wealthiest individuals and corporations, and even repeals the multi-millionaire inheritance tax, because hey, what else is Republican tax policy for?

But the bill isn't headed to the president's desk just yet. First, it needs to be reconciled with a tax bill out of the House, and if the House makes major changes, it could even be kicked back to the Senate for yet another vote. Which means, as much as the American left has already exhausted itself been urged to call their members of Congress, launch public demonstrations, and in a general political sense simply raise hell, those efforts are still absolutely urgent and necessary right now.

What does that mean for you, in the simplest terms? The easiest, most popular, and most straightforward way to lodge your disapproval about this bill, short of actually joining a public protest or launching one of your own, if to call your member of Congress ― especially if you're represented by one of the ostensibly on-the-fence senators that just helped push this bill over the finish line in the Senate, or are represented by a Republican in a potentially vulnerable district in the House of Representatives. Or, hey, a Republican in any district, no matter how blood-red. This is an all hands on deck moment if ever there was one.

And of course, if it gets kicked back to another vote in the Senate, the names that are probably top of the list for targeting are getting pretty familiar. Names like Alaska Sen. Lisa Murkowski, Maine Sen. Susan Collins, and Arizona Sen. Jeff Flake, who seemingly came the closest to bucking Senate Majority Leader Mitch McConnell and turning against this bill before ultimately voting for it.

Both Murkowski and Collins were instrumental in defeating the GOP's efforts to repeal the ACA. That's one particular reason their decision to cast votes in favor of the tax bill ― complete with a provision stripping the individual mandate ― was such a bitter disappointment for those Democrats who'd offered them measured praise all those months ago.

And throw John McCain in there for good measure. Or, again, any of them! If you live in a state represented by a Republican senator who's supporting this bill ― and was basically all of them, save for Tennessee senator Bob Corker ― there's no harm in trying to jam up the phones at their state and federal offices, even if it proves futile in the end. Even if you might lose in the end, and it happens to everyone sometimes, it usually feels better to go down with a fight.

So if you have the time and the wherewithal ― and if you don't right now, try to find a way to get there soon, and fast ― do everyone a favor and contact your members of Congress. The phone numbers for both state and federal offices can all be found via the websites linked on the congressional directories; you can find the House listings here, and the Senate listings here.

Call early, call often, and while you should most definitely be polite, you should also be firm about why you oppose this bill, and how you'll organize, advocate against, and do everything in your power to send anyone who votes for this thing packing in their next election.