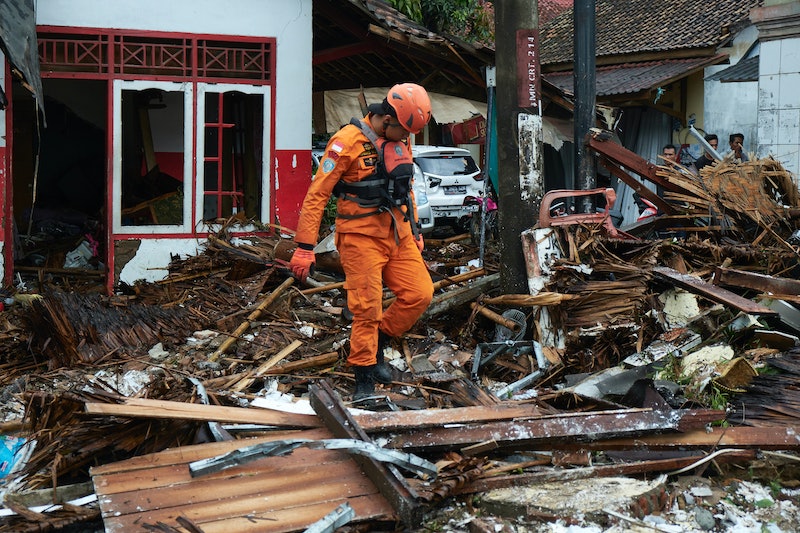 Parts of the Indonesian islands of Java and Sumatra were hit by a tsunami on Saturday that killed hundreds and devastated coastal areas, bringing down homes, businesses, and more. Relief work is already underway, and there are ways that you can help those affected by the Indonesian tsunami from wherever you are this holiday weekend.

Experts say that giving monetary donations is the best way to make a difference after a natural disaster. USAID's Center for International Disaster Information says that giving to established relief agencies is the way to go. Donations of water, food, or other items is nice but can cause logistical problems, and there's always the chance it won't make it. If you give money, groups on the ground can buy whatever it is they need most.

In Indonesia, there are already many established groups with knowledge about tsunamis hard at work. There was another tsunami as recently as September, and relief organizations have been assisting in that recovery, too.

Some of these groups have already mobilized to the newest disaster site. The Red Cross and Red Crescent have dispatched 20 volunteers and workers to the site of the tsunami with water, tarps, shovels, axes, and hygiene kits. They'll deliver first aid and rescue survivors; later they'll move to recovering bodies. You can support their efforts by donating here.

After the last tsunami, CNN and Public Good teamed up to connect donors with relief groups working in Indonesia. For a start, you can check out the organizations on their website and see if they're responding to this disaster. There are both religious groups and secular organizations.

Some of the groups are waiting for an official request from the Indonesian government before they get to work. "We are ready to help with #tsunami relief and recovery efforts if needed," Mercy Corps wrote on Twitter. "The government of Indonesia is not currently requesting assistance and response is being handled by the National Disaster Management Agency of Indonesia." The group has been working in the country for 20 years, according to The New York Times. They also responded to quakes earlier this year. You can donate here.

UNICEF is also an option for your donation. The group has been working in Indonesia, and is ready to deploy to the latest site. "We're already working to keep children safe and help families recover after earthquakes & tsunami earlier this year," UNICEF UK wrote on Twitter. "Unicef teams ready to support government response." Donate to the group here.

Oxfam is gearing up to help, too, and has sent a team to the area to check out what will be needed, in addition to food and clean water. "Oxfam is working urgently with local partners to reach areas affected the tsunami that hit the shores around Sunda Strait," the group posted on its website. "Oxfam and local partners are currently assessing needs to help to understand the scale of the disaster and to determine what sort of response may be required." They've already set up a specific fund to help.

More aid groups are likely to respond in the coming hours and days when the needs on the ground are better known. Consider donating to one of the established organizations noted here, or check with your preferred disaster relief group to see if they are going to be working in Indonesia as well.