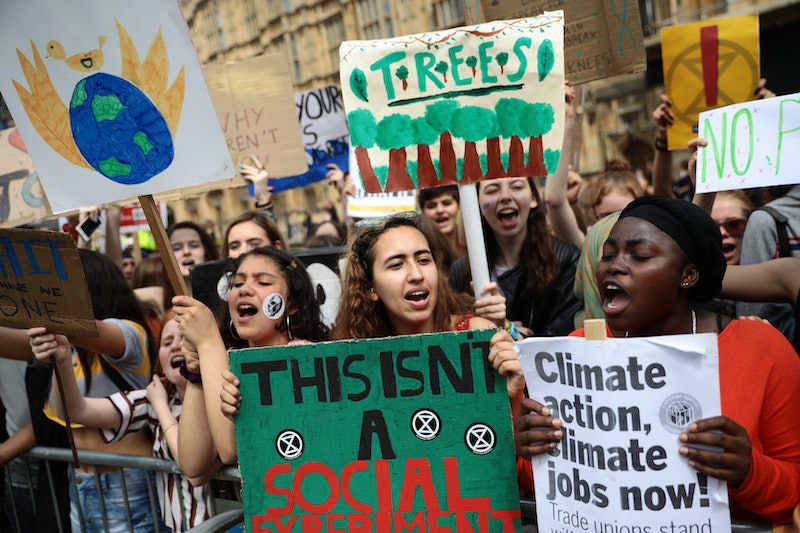 On Sept. 20-27, climate action organizers are planning a Global Climate Strike, with hopes that massive and consistent turnout will make a difference. If you'd like to join the 2019 Global Climate Strike, there are lots of ways you can get involved. And if there isn't a strike planned in your city, the organizers want to help you plan one yourself.

"The climate crisis is an emergency but we’re not acting like it," the strike's official website reads. "People everywhere are at risk if we let oil, coal and gas companies continue to pour more fuel on the fire." And yes, though past strikes have focused on students, adults are welcome and absolutely encouraged to take part, too.

In fact, the organizers have compiled guidelines to help you organize your community or your organization/workplace. Even if you can't walk out of your job, you can set up a training, join the strikes on your lunch break, or take formal leave to attend to the strikes. If you know you'll be able to go to the strikes, you can pledge your attendance by submitting a form on the site.

The site also stresses that it's important to coordinate with events that are already being planned, which are listed on this map after they're registered. And if you're not able to come to a march or a rally, the site mentions other ways you can get involved, like spreading the word on social media or organizing a photo campaign.

So far, there are strikes planned in over 150 countries, but for the strikes to be most effective, there needs to be even more turnout. "Everyone should mobilize for the 20th and 27th of September," Swedish climate activist Greta Thunberg said in a video, "because this is a global issue which actually affects everyone.”

These strikes have mostly been led by young people all over the world, who have taken Thunberg’s lead and skipped school on Friday to protest government inaction on the climate crisis, according to Vox. Now, UN Secretary General António Guterres has hinted it's adults' jobs to take action, as well.

“These schoolchildren have grasped something that seems to elude many of their elders: we are in a race for our lives, and we are losing,” Guterres wrote in an op-ed for the Guardian. “My generation has failed to respond properly to the dramatic challenge of climate change. This is deeply felt by young people. No wonder they are angry.” During that week of the strikes, the United Nations Summit on Climate Change will be taking place on Sept. 23 in New York.

Leaders will have much to discuss at the summit. In October 2018, a major report was released by the U.N. Intergovernmental Panel on Climate Change, which claimed that society might collapse due to rising temperatures as early as 2040. And after July 2019, the hottest month in recorded history, Greenland lost more than 60 billion tons of ice in one week after a heat wave struck the Arctic country. The UN has warned that we have 12 years to address the climate crisis and limit global warming.

More like this
6 Organizations Fighting Police Brutality That You Can Support Right Now
By Syeda Khaula Saad and JR Thorpe
15 Black-Owned Liquor & Wine Brands To Add To Your Bar Cart
By Alexis Morillo
These Artists Are Reimagining Black History Month To Create A Better Future
By Katie Mitchell
Here’s Where The NHS Nurses’ Strike Currently Stands
By Sophie McEvoy
Get Even More From Bustle — Sign Up For The Newsletter
From hair trends to relationship advice, our daily newsletter has everything you need to sound like a person who’s on TikTok, even if you aren’t.