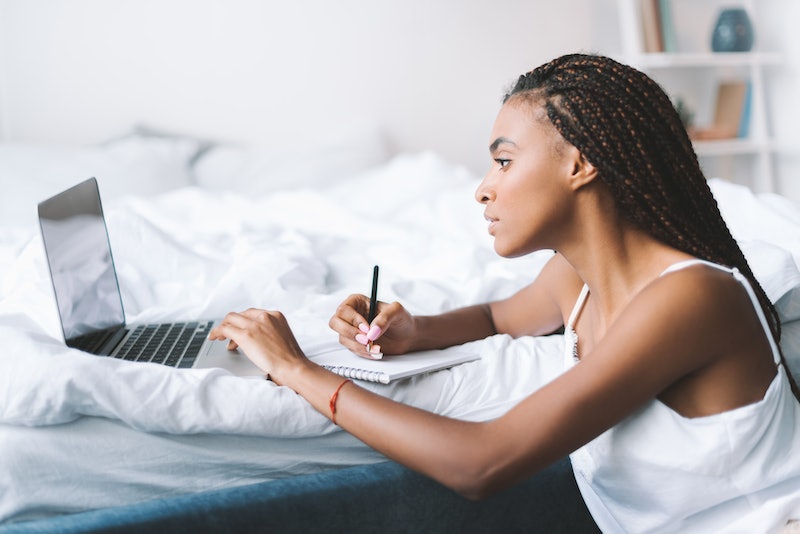 October is National Cybersecurity Awareness Month, which means it's the perfect time to make sure all your digital affairs are in order. One of your first steps should be learning how to keep your online passwords safe — and Google's newly integrated Password Checkup tool makes it super easy. As the company announced in a blog post on Oct. 2, this feature can detect whether your passwords have been compromised and alert you if you need to change them.

Google first released Password Checkup as a Chrome extension back in February, Ars Technica reported. Google said in its blog that, while the extension was popular, the company wanted to make people's online experiences "safer and easier" by making Password Checkup more accessible. As a result, Google is now automatically integrating the tool into its platforms — and you can start using it right now if you have a Google Account.

The company says you can conduct a password security check with its tool simply by going to your Password Manager at passwords.google.com. Once you've signed in, the Password Checkup feature can tell you lots of information about any of the passwords stored in your Google Account. The tool will let you know whether your passwords are weak, if they are being used for multiple logins (which makes them less secure), and whether they have ever been "compromised in a third party breach." It will also offer you a direct link to change those affected passwords, if you want.

As CNN reported, Google's director of account security, Mark Risher, said that the company cross references your passwords with data from the open Web and the Dark Web to make sure they haven't been hacked. Google noted in its blog that it has previously discovered "four billion unique username and password combinations from crawling only the open Web," so it certainly seems worth checking to see whether your information is secure.

In addition to integrating the Password Checkup tool into Google Accounts' Password Manager, Google also said it plans to automatically incorporate the tool into its Chrome browser sometime soon. "Later this year, we’ll build Password Checkup technology directly into Chrome for everyone — so you get real time protection as you type your password without needing to install a separate extension," the company reported on its blog.

Google's efforts to make password management easier came about after a survey it conducted with The Harris Poll revealed that Americans are frustrated by having to keep track of passwords, the company's blog explained. Because of this frustration, people often choose passwords that are easy to remember and less secure, Google said.

For example, the company noted that its survey found that around one in four Americans have used incredibly common passwords (or some variation of them). These passwords include "111111," "abc123," "Password," and others. Moreover, the company noted that survey results also revealed that 66% of respondents used the same password for more than one account and that four in 10 people said they had had their information compromised online.

Understandably, people have a hard time keeping track of their passwords. But as Cybersecurity Awareness Month kicks off, consider taking proactive steps to make sure your online accounts are secure, whether you're using Google's tool or other online security measures.