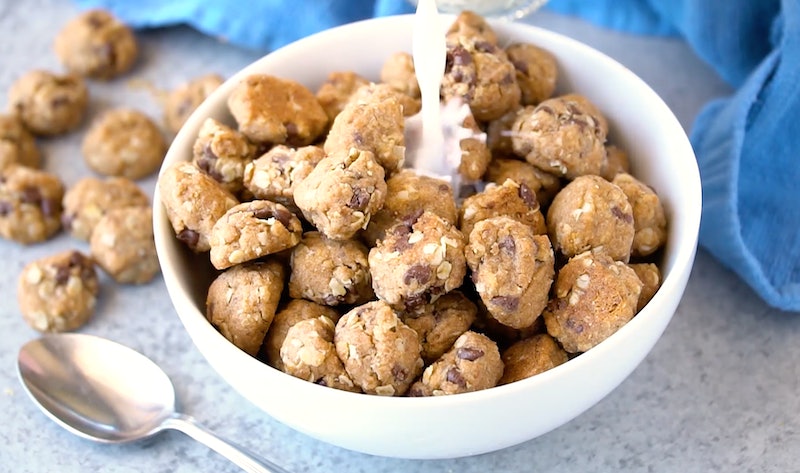 On today's episode of "Weirdly Delicious Things People Have Resorted To Making While In Quarantine," I present to you: cookie cereal. This dish is essentially a bunch of miniature chocolate chip cookies floating around in a bowl of milk. So, if buying Cookie Crisp is just way too easy for you, step it up and learn how to make cookie cereal from scratch right in your own home.

Cookie cereal went viral after TikTok and Instagram users started losing their minds over the mini-pancake cereal trend, which basically just consists of a bowl of small pancakes, sans the milk, but hey, anything goes in quarantine, right? But when Justin Schuble, owner of the @dcporn Instagram account, set out to recreate the dish with something he could use milk with, he decided on mini cookies.

Schuble made the cookie cereal twice on his Instagram account. The first attempt at making cookie cereal was exactly that... an attempt, which received 300,000 views on TikTok. After the recipe had gone viral, Schuble decided to tweak the recipe and now, thanks to him, you don't have to go through the process of a trial-and-error. You can just use his recipe and get perfect cookie cereal every single time.

Schuble suggests using Nestle Toll House chocolate chip cookie dough as the base for the cookie cereal. This takes all the extra work out of making your own dough, plus it makes for a dense-enough cookie for your cereal. He suggests cutting up the dough into even pieces, which he learned from his second go at the recipe.

During his first attempt at cookie cereal, Schuble rolled the dough into balls but mentioned on his second Instagram post that it's better to just round the edges of the dough chunks. He even throws in a single, extra chocolate chip at the top of each piece for added aesthetic. Then, he just pops them in the oven at 350 degrees Fahrenheit for approximately seven minutes. Because the cookies will be on the softer side, Schuble suggests letting them sit on the counter for a few minutes to harden.

Once your mini chocolate chip cookies are all done, there's nothing else left to do except for toss them into a bowl of milk and enjoy them the way you would any other cereal. Schuble suggests only pouring in a little milk at a time to avoid soggy cookies. But, hey, if you're into that, pour away!

If you're not into cookies for breakfast, layer some ice cream on top and make it a dessert. Whether you want to change up the kind of cookie dough you're using or what you want to serve with your cooke cereal, you can have as much fun as you want. After all, it is cookie cereal.