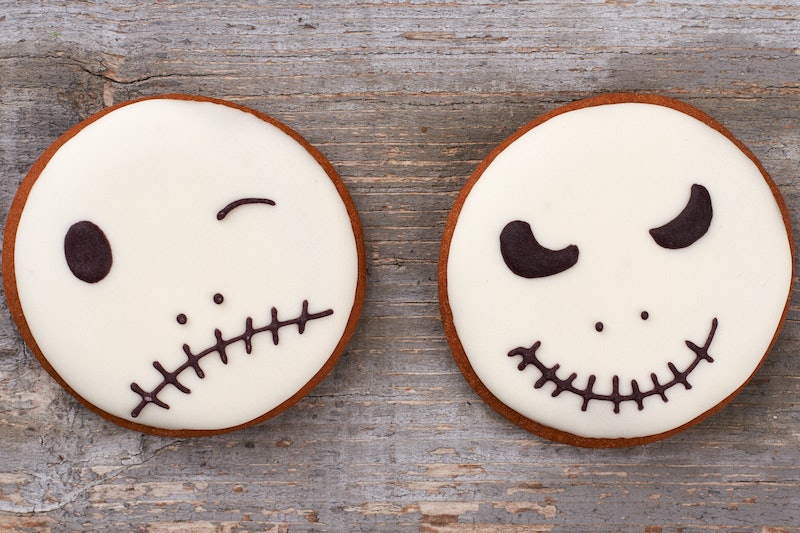 Have you ever heard the saying, "May is the new October?" No? Well, you might start hearing it now! Disney Parks announced that it would be celebrating the halfway-to-Halloween point this year by spreading some fall cheer to their customers who are staying at home. And they intend to do this with the release of some of their best Halloween-themed goodies. One of which are their adorable Jack Skellington sugar cookies. We know... it's like you can smell Halloween in the air already.

This isn't the first time Disney's released the sugar cookies recipe, but as part of the halfway-Halloween point, the company decided to repost some of its fall favorites. Though you can make sugar cookies any time of the year, it could be fun to indulge in the halfway holiday and jump aboard the Halloween train. (This doesn't mean you should go trick-or-treating).

To get started on the cookies, combine the flour, baking powder, and salt in a bowl and whisk everything together. After this, melt the butter and toss it into an electric mixer bowl along with some sugar. Then, beat in eggs and the vanilla extract as its mixing. You'll also want to add the flour mixture in three parts.

Once the dough is mixed, cover the bowl with plastic wrap and stick it in the fridge for an hour. Once it's out, preheat your oven to 400 degrees Fahrenheit while you prepare the dough. Roll the dough out on a floured surface and then use a round cookie cutter to cup up the circles for your cookies. Then, place the cookies on a baking sheet and bake them for 10 minutes until they're golden brown.

While you're letting your cookies cool, you can work on your icing. Add egg whites to an electric mixer bowl and then whisk it until it has a frothy consistency. Then, add the confectioner's sugar bit by bit until the mixture is thick but still spreadable. This is your icing. Take a third of this icing into a separate bowl and add the black food coloring paste to the the rest of it. Stir in the paste until the entire mixture is black.

When both your cookies and icing are done, all that's left to do is decorate. Even if you're not an artist, getting Jack Skellington right is pretty easy.

First start off by spreading the white icing on your cooled cookies. Let them dry by placing them in the fridge. Then, add the black icing to a piping bag and use it to draw the ices, nostrils, and stitched mouth to each cookie. Whether you want Jack Skellington to look sweet or scary is totally up to you. Mix it up if you want!

The Disney Parks recipe makes 18 cookies, so you'll have enough to share with your whole family. But, if you choose to celebrate the halfway-to-Halloween point alone, it just means more cookies for you.