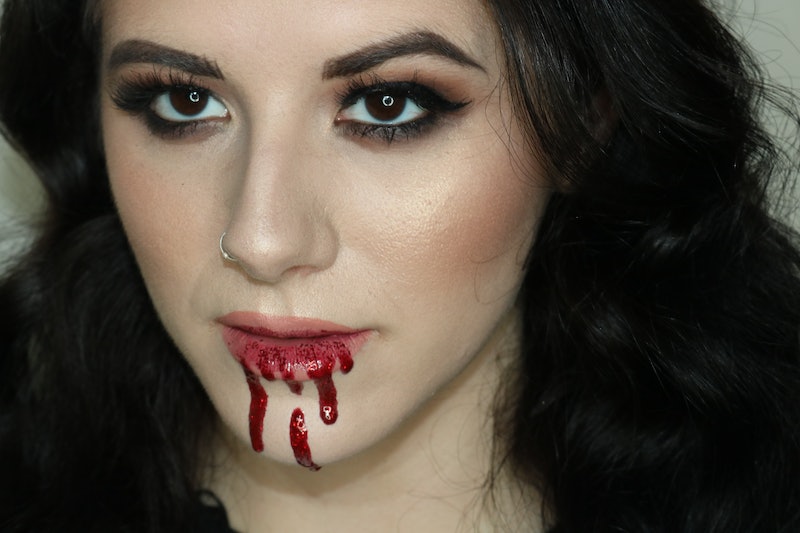 I adore Halloween: Give me a little glam, a little gore, and I'm really in my element. But the one thing I can't stand spending money on costumes and accessories I'll never wear again. For example, I own a bottle of Ben Nye fake blood. I've had it for approximately six years. It sits somewhere in the bottom of my closet because I only have a use for it once a year and, most of the time, when I need it, I can't even find it. Fake blood is rad, but it doesn't really have much use after Halloween is over. Luckily, I've got some fake blood hacks up my sleeve — all using makeup you probably already own.

The two things when trying to simulate blood are the color and texture. It needs to be thick and dark red, like actual blood. You also want to make sure it stays on all night, so that you won't look in the mirror and see a scene straight out of a horror movie. That considered, using longwear cosmetics that won't slide off of your face in 30 minutes is key.

If you're ready for a bloody scene, then grab a lip brush and let's get to mixing.

If you're feeling extra lazy (let's admit, we've all been there), or if you're choosing your costume super last minute, then lip gloss will save the day. If you already own a lip gloss that's extremely viscous and deep, dark red, then no one will ever know the difference.

Obsessive Compulsive Cosmetics Lip Tars are perfect, especially the color Black Metal Dahlia, which has a blackened red base and metallic red pearl flecks. Just dab a little on a fake wound and no one will ever know the difference.

If you're more of the stain type of girl, just use those to create the color instead. On a plastic surface (the tops from old Chinese food takeout work very nicely), dab a grain-of-rice-sized amount of red lip stain and small dot of deep purple, dark blue, or black lip stain. I used Too Faced Melted Matte Liquified Long Wear Matte Lipstick in Lady Balls as my red, and Kat von D Everlasting Liquid Lipstick in Exorcism as my purple. To create the thick, goopy texture, I mixed in some clear gloss. I used OCC's Lip Tar Primer, which is super thick in texture, almost like maple syrup. You can use any clear gloss, really, but the heavier the better.

The only downside is that the pigments might stain your skin a bit. If you're serious about your look lasting the whole night, and you don't mind having some faint red lines on your chin in November then I highly recommend this option — it really does look exactly like blood.

For my last concoction, I utilized eyeshadows to create the blood. Anastasia Beverly Hills Modern Renaissance Eyeshadow Palette served as the mix-in to give the blood its color. Using the back of my brush, I scraped a little of the Red Ochre and Venetian Red Shadows onto the plastic lid. A clear gloss gives the blood its texture, and voila! An easy, peasy bloody mess.

Now if you like to be a little extra (like muah), and you happen to have some spare red glitter around, just mix it in to your favorite formula for a little extra bling. I personally loved the color and richness of my second concoction and I know the only thing that could possibly make it better was glitter.

Grab a huge, gloppy amount and lightly tap it to the center of the lower lip.

Then let those drippies fall.

Just a warning: the drips feel SUPER strange. I could feel them slowly making their way down toward my chin. Plus, the OCC Lip Primer has peppermint oil in it, so it was super tingly in the most bizarre way.

But the look was rad, so it was totally worth it.

Whether you plan on being a Zombie, a vampire, or Khaleesi eating a horse heart this Halloween season, this bloody hack has got you covered. Have a spooktacular holiday, my friends.