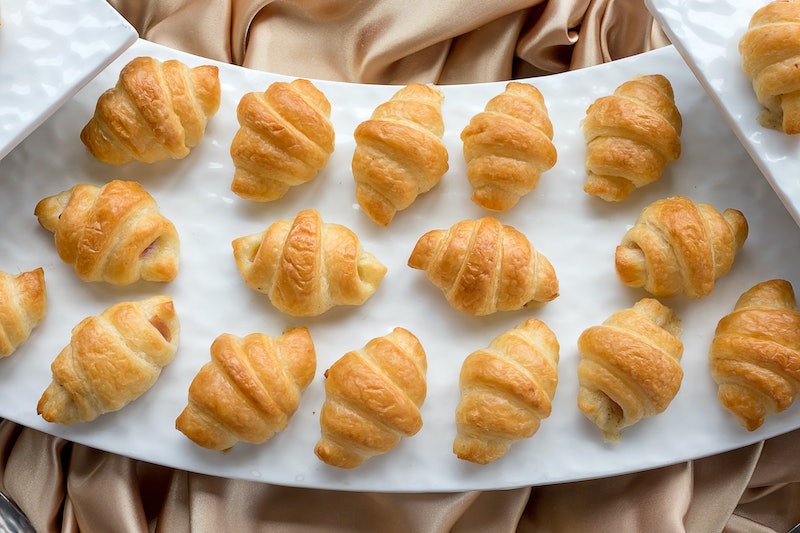 Just when you thought that people had done all that they could with the mini-food cereal trend, a new version is going viral on TikTok. By now, you've probably seen pancake cereal, cookie cereal, donut cereal, and even Pop-Tart cereal. But it's time to make way for a new recipe: mini croissant cereal.

At the heart of this mini cereal trend is a simple formula: make tiny versions of food, stick them in a bowl, and add milk. But from this, so many fun and creative recipes have been born. Many people also take it upon themselves to add their own individual flair to their recipes, including sprinkles, syrup, and fruit.

With the mini croissant cereal, the appeal is mostly in how adorable the croissants look in miniature form. And even though they look super complicated, they're actually easier to make than you'd think.

To start off, it's a good idea to use pre-made croissant dough. You can buy any regular can of this dough (such as from Pillsbury) and use it to make mini croissants by cutting up the dough into much smaller triangles than usual. You can roll these smaller dough pieces up the same way you would do regular-sized croissants, and you'll end up with perfect-looking mini versions. Then, you bake them into small crispy pieces and enjoy them inside a bowl of milk. Though dipping croissants in milk might not be something you ever considered doing, it's safe to say you're in for a delightful surprise.

The best part about any of these mini cereal recipes is how much you can customize them to make them your own. And if you can't really think of a way to spice up the recipe on your own, you can always turn to social media for inspiration.

From TikTok to Instagram, people have tried out their own versions of the mini croissant cereal and come up with different ways to make their recipes unique. Some people have tried simple changes, including adding chopped strawberries to create a fresh sweetness in the taste. Other people have gotten more creative with their mini croissant cereal, including one user on TikTok who added a melted Nutella and Biscoff cookie butter spread over their croissants before adding milk. So long as you have mini croissants somewhere in a bowl, you can do almost anything you want to the recipe. You don't even have to add milk!

Quarantine has proved to be a time where people's boredom and creativity are teaming up to help them create fun things they may have never tried before. And mini cereal is definitely one of these. The best part about these trends is that you never know what may come next. Is it mini cake cereal? Mini cupcake cereal? Mini french toast stick cereal? The possibilities are endless. And if you act quick enough, you might be able to start the next viral mini cereal trend.