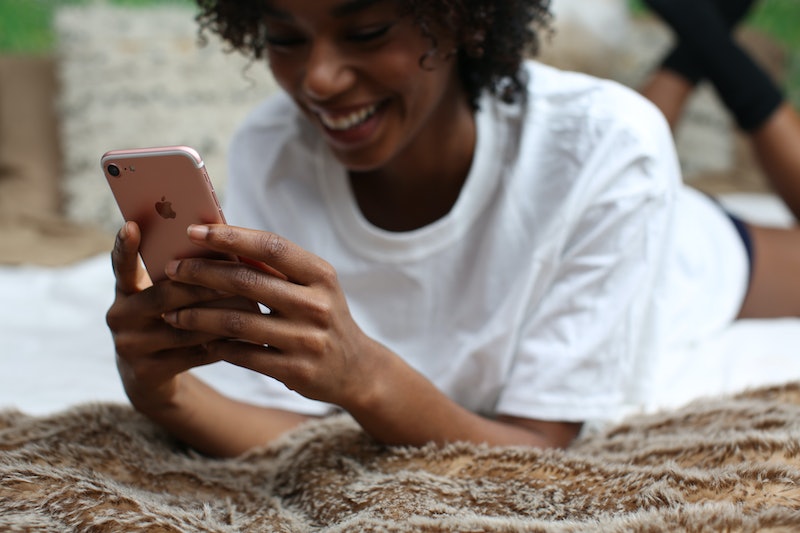 As 2016 rolls to a close, we all can agree this year has been a tough one. That's why it's especially cool that Facebook is releasing a (literally) bright new feature. What's more, learning how to post colorful Facebook statuses is — thankfully — nice and easy. True, Facebook isn't allowing us to redesign everything on our pages; however, colorful Facebook statuses are definitely a step in a fun direction. I don't know about you, but for me, they take me straight back to my '90s Myspace days of customizing my profile and selecting my page's fonts, colors, and layout. (Bustle has reached out to Facebook for more information.)

Update: Says a Facebook spokesperson to Bustle via email, “We're rolling out a change to help people make their text posts more visual. Starting today, people can update the background color of their text-only posts on Android.” The rollout begins the week of Dec. 19 (so, this week, for those keeping track).

Earlier: There is some bad news, though: Not everyone has access to the feature right now. According to TechCrunch, right now, only Android users have the ability to create colorful statuses, although all users will be able to see them; what's more, although the feature will be rolling out globally soon, it's only being tested in certain regions.

But as of right now, it appears that users who do have access to the feature have a decent amount of color options to choose from. For example, you can go with a solid color or a gradient style that has a bit more pop to it. It does look like the text will always remain white, though; so, you can't have, for example, a status with both red text and a red background. Ah well.

Personally, I'm super interested in how the Facebook algorithm actually works. You know how sometimes your posts gets tons of attention, and other times they seem to fade the abyss? I'm curious to see how colored backgrounds impact the way people read and react to our content, and if there will be correlations between the colors we choose and the popularity of the post. Time will tell!

So, how do you post a colorful status on Facebook? Luckily, the steps are quite straightforward. I've broken them down below in hopes that putting some color into our social media will brighten the end of 2016 at least a little bit.