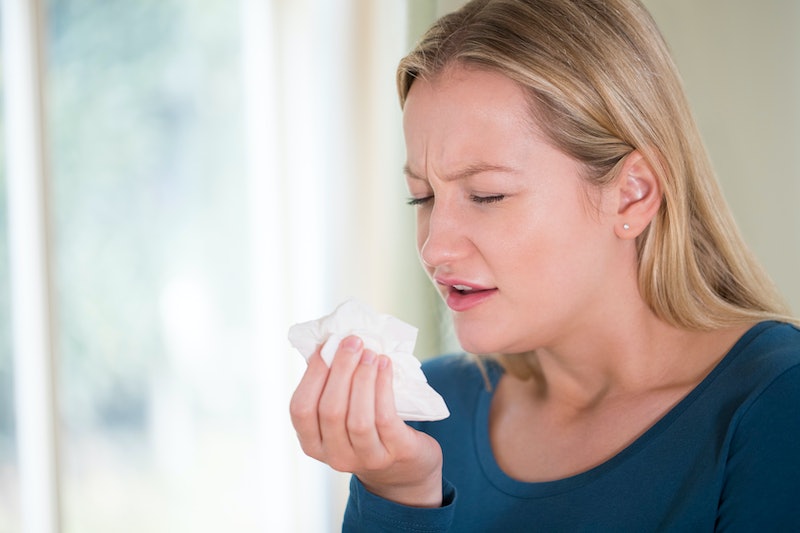 Ever get that feeling like you're about to sneeze, but you can't seem to break through the threshold and actually sneeze? Whether you're suffering allergies, if you're sick, or you just simply have that urge to clear our your nasal passage, being stuck in unable-to-sneeze purgatory is deeply frustrating. And while people have all sorts of tips and tricks for how to stop a sneeze, (say "grapefruit", press your finger under your nose, or say "pickles") where's all the advice for how to start a sneeze? As it turns out, there is actually a way to make yourself sneeze, but only some people can do it — and it's based on genetics.

About a quarter of the population inherited the ability to sneeze reflexively, a trigger induced by looking at a bright light. According to Boing Boing, the ability is genetic and is called photic reflex sneezing, but it has been given the nickname "the sun sneeze" because it most commonly occurs when people (with the gene) go from a dark place to a naturally light place. People who have this reaction to bright light have a specific variation within their inter genetic region, meaning the ability to control your sneezes with light exposure is definitely not something you can learn how to do. It's something you're born with, and not necessarily always a pleasure as much as it is a nuisance. But even if you don't have that genetic predisposition, there are still ways to make yourself sneeze. Here are a few learned sneeze-inducing skills that definitely aren't in your DNA.

This article was originally published on April 3, 2018