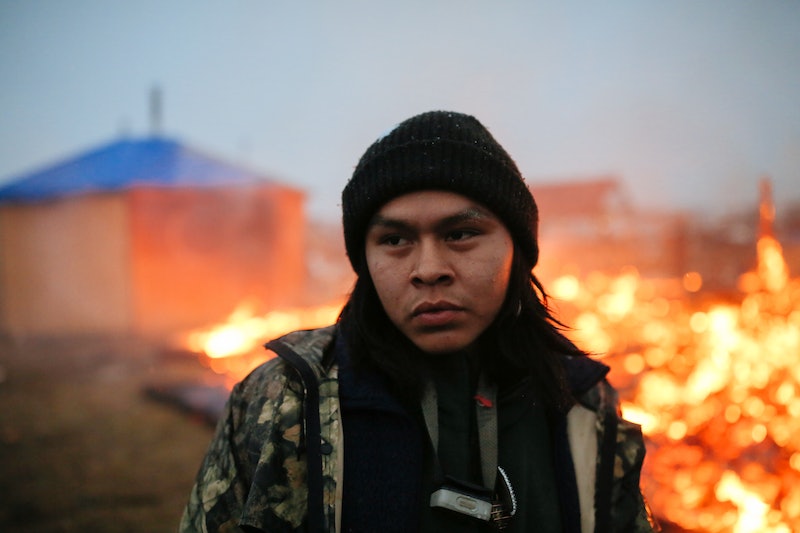 With the stunning news of the eviction of water protectors from the Oceti Sakowin camp at the Standing Rock Sioux reservation, site of the almost year-long protest against the Dakota Access Pipeline, many people who supported the No DAPL movement are in despair. This movement was an introduction to native rights organizing for many non-indigenous people, and the false gains achieved in late 2016 made it all the harsher. For native people, however, this terrible loss was part of a centuries-long fight for sovereignty. We mustn't feel hopeless about Standing Rock, and should instead learn from the people leading the movement about how to resist despair in the face of unthinkable disregard for the basic rights to clean water and self-government that have been systemically denied to native people since the founding of this country.

As protesters ceremonially burned the Oceti Sakowin camp prior to their evacuation, social media activity regarding the eviction, complete with reports of a heavy police presence at the camp and rumors of arrests intensified. The news is tragic, especially in light of the false "victory" of the temporary halting of DAPL progress. The water protectors understood that Donald Trump's presidential victory could potentially mean death to their hard-fought campaign to protect their water and sovereignty.

Despite the gravity of this loss and its status as likely the largest popular campaign for indigenous rights adopted by non-natives, this is neither the first nor the last time native people have fought for their rights, and they can provide guidance on how to handle this massive setback on the road to native sovereignty.

Recognize That The Fight Is Far From Over

The Western metaphor for war that is commonly deployed to discuss resistance applies well here — this most recent loss is but a battle in a centuries-long war of resistance. The popularity of the "no bans on stolen land" slogan showing solidarity with immigrants that Trump tried to ban from the country proves native people continue to fight for rights of those who are marginalized.

And despite this recent major loss, native people and the allies they've gained with the popularity NoDAPL movement will continue to fight for their rights.

Be Thankful For The Awareness This Movement Has Raised

I can't recall any moment in my lifetime that people cared this much about the rights of native people, and the popular support of the NoDAPL movement counts as a major win in the battle for non-native recognition of native rights issues. There will undoubtedly come a time when native people will call on the support of their new supporters, and this movement will hopefully act as a jumping off point for indigenous allyship in the future.

Appreciate The Power Of Faith

With interfaith support of Standing Rock accompanying general interest in the movement, and with calls for prayers such as the one above, the spiritual aspect of this fight cannot be denied. Rather than hiding their religious practices and beliefs, native people at Standing Rock showed pride and reverence. The DAPL won't just threaten the Standing Rock Sioux's water source — it also runs through sacred grounds, and the fight to protect the water is intrinsically tied to the fight to protect the religion of the tribe. Given the long and sordid history of religious discrimination against native people, this recognition and celebration of native faith is essential.

The NoDAPL movement is but a milestone in the worldwide struggle for indigenous rights and sovereignty. As with so many other groups who have had to fight for their lives, this flashpoint in the native rights movement serves to teach us all that continued resistance, as passed down from generation to generation, isn't just a virtue, but a reality for many people in the U.S. and around the world.

The battle against the Dakota Access pipeline seems to have been lost, and as water protectors mourn, it's time to organize to help people arrested at the eviction and regroup to figure out what comes next — those on the sidelines must support them.

This loss belongs to the Standing Rock Sioux and their coalition of tribal allies, and while sadness, disappointment, and even despair are common emotions in every struggle, we can best serve the water protectors by doing all we can for them without losing ourselves in our own feelings.