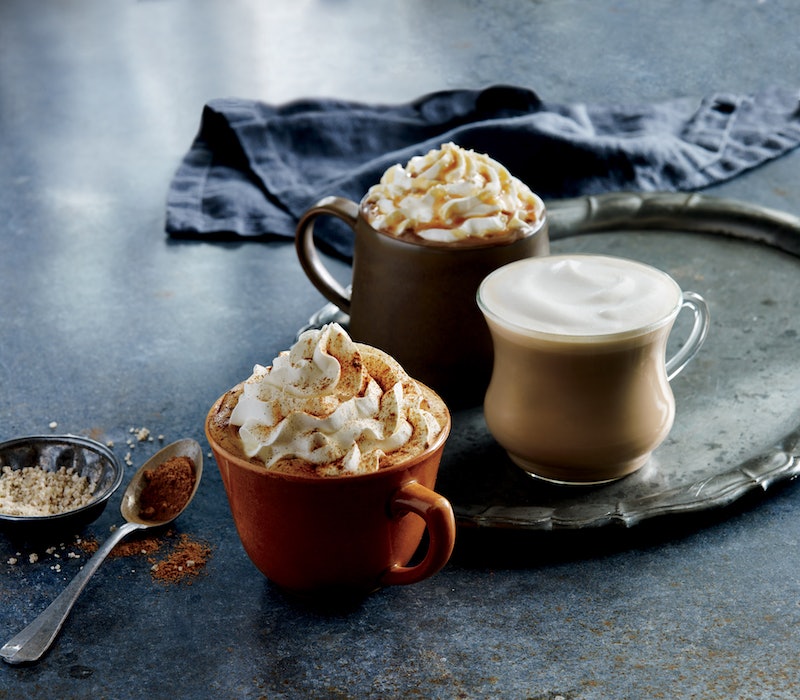 Ready or not, fall is fast approaching. Case in point, the Starbucks Pumpkin Spice Latte is already upon us. If the PSL is not your jam, but you still want your pumpkin fix, here's how to order a Starbucks Pumpkin Spice Chai Tea off the secret menu. While some people are crying "too soon," personally I don't think it's ever too soon for the best, and shortest, season, or for epic fall drinks. I mean, it's not like it comes in a red cup or anything, because that would really be too soon.

If you didn't know that Starbucks had a secret menu, you're not alone. In fact, most places have so-called secret menus, which are basically ordering hacks compiled online by people who dared to ask for something they didn't see on the menu. The nerve! But, hey, you never know unless you ask, right? In this case, coloring outside the lines means you can walk away with the essence of fall in a cup in the form of a Starbucks Pumpkin Spice Chai Tea so you can totally win at fall.

Fall is the season I miss the most since moving from the East Coast to the West Coast five years ago.

It's true that I can no longer enjoy the kaleidoscope of changing and falling leaves because, in Los Angeles, fall is actually summer's hotter (and less popular) cousin who stays too long at the party and drinks all the whisky. However, I can still enjoy fall in a cup, which allows me to at least pretend I am back east, if only for a few minutes. Let me have my fantasy — I'm grasping at straws here, and I'm super jelly of everyone wearing a sweater today.

But, because I love you, I'm going to tell you how to get your Starbucks Pumpkin Spice Chai Tea. But, shhh, it's a secret.

How To Order A Pumpkin Spice Chai Tea

According to Sydney te Wildt, who revealed this amazing life hack for Spoon University, it's super easy to get the Starbucks Pumpkin Spice Chai Tea without becoming one of those barista-annoying people who holds up the line, if you follow her simple tips. You can even do it on the app, that's how easy it is.

Here's what to order: A chai tea latte with pumpkin spice sauce. "The pumps of sauce coincide with the size of drink you are ordering: three pumps for a tall, four pumps for a grande, and five pumps for a venti," te Wildt explained. "You can obviously customize your pumps based on personal preference, but that's the standard."

Like it sweet, or not so much? You can customize this too. "You can decide whether to order the Classic Chai Tea Latte or the Lightly Sweet Chai Tea Latte, depending on how sweet you want your drink to be," she wrote. "I personally prefer the Lightly Sweet version because the aftertaste is a bit less intense than the OG edition, but both are yummy fall beverages that deserve all of the claps."

For those who like it more spicy than sweet, the Starbucks Pumpkin Spice Chai Tea is a perfect alternative to the PSL. The chai version is going to give you more spicy chai notes than sweet elements you'd get with the PSL, which still gives you the pumpkin taste you love without all of the sugar. And, it tastes pretty effing great.

"I don't want to say that this drink tastes like fall in a cup because that's so extra, but it really does," te Wildt noted. "You get some warm notes of nutmeg and cinnamon from the chai combined with the rich and creamy pumpkin sauce for the perfect fall treat."

This all sounds pretty fantastic to me. BRB, I gotta go get my fall in a cup because I'm having major FOMO right now.