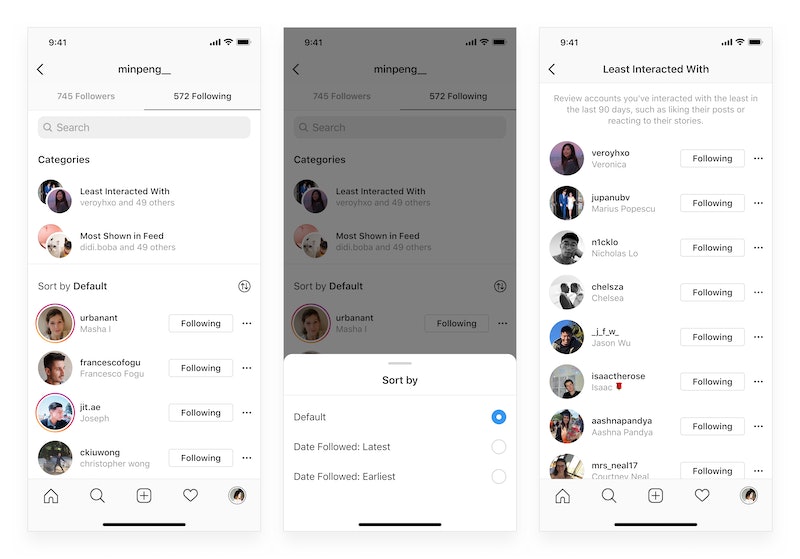 Sometimes it can feel like you're due for an Instagram cleanse — and I'm not talking about your own posts. After a while, the posts you see on your Instagram feed might seem dated, or even feel irrelevant to your life. When this happens, it's time to do a little spring-cleaning and Instagram just made it much easier. On Feb. 6, the platform launched a new feature that lets you organize who you follow on Instagram, based on different categories.

You can find the feature in your Following list, which can be accessed right from your Profile. Once you're there, you'll notice that you can sort the accounts you're following into two categories: "Most Shown In Feed" (the accounts you see most often when scrolling through your Instagram) and "Least Interacted With" (accounts whose posts and Stories you comment on or like the least). These Categories are right above a general list of all of the accounts you follow, which is sorted by default. You can also organize these accounts in order of the date you followed them. This way you can see who you've followed over time and even throw it back to the first account you ever followed.

According to Instagram, the company released the new tool to better connect users with people and things they care about most, taking into account the fact that your likes, dislikes, and relationships change over time. In the past, it may have been difficult to sort through your Following list and get rid of any dead weight. Now, you'll get a clear idea of who you're following so you can decide if you're invested enough to keep following them.

If you no longer wish to keep following someone, you can tap the "Following" button to change it. Or, on the other hand, let's say you're okay with continuing to follow someone, but would like to limit how much you see their posts. In that case, you can hit the three dots by the name of the account and click on Manage Notifications or even Mute. This way, you'll see less posts (or no posts) from that account while avoiding the harshness of an "Unfollow."

Whether you're tired of seeing that meme account you followed when you were 16 or just want to start limiting your Following list to people you really care about, you can regularly maintain the content you choose to see on a daily basis. A seemingly-never-ending Following list can feel overwhelming, but with this new feature, it shouldn't deter you from weeding through your feed until it looks exactly the way you want it to.