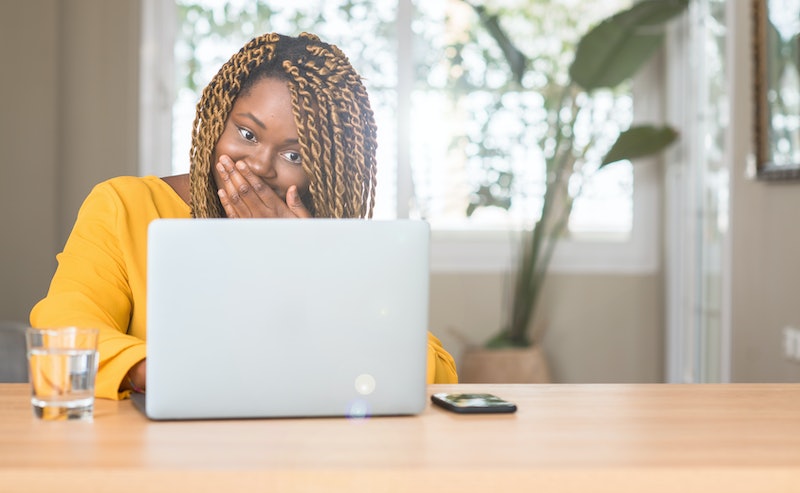 Just think, a few months ago, you could easily cut a disastrous date short with just one simple emergency text from your BFF. But now, because of social distancing, the "I have to get home to feed my goldfish" excuse is no longer one you can fall back on when you're going on Bumble dates on your living room couch. But politely ending a bad virtual date is totally possible — it just takes a little extra creativity.

According to Laurie Berzack, MSW, dating coach and owner of Carolinas Matchmaker, it's completely OK and even expected to go on virtual dates that aren't amazing. Sometimes, there will be a complete lack of Zoom chemistry, and other times, the person you're talking to will make a weird joke about their pet ferret, and you'll know they're not the one. Treat the virtual date the same way you would an IRL meet-cute and let your instincts guide you.

"If you're not feeling a spark and you're unmotivated to keep the conversation going or schedule a second chat, pay attention to that feeling and move on," Berzack says. "In the end, it's better to be honest than lead someone on when you know it's not going anywhere."

Say your roommate might need the computer in an hour, so you only have a certain allotted amount of time to talk

The key to ending a bad virtual date is simple and elegant: be nice. Keep your words mindful and your tone intentional. For example, Berzack suggests saying, "Hey, it was great talking to you, but I need to deal with something right now," or "I can't really talk much longer, but it was nice meeting you." There's no need to stress yourself out over making up an excuse on the spot or going into too much detail. Just say you need to go, thank them for their time, and log out of the conversation.

You can even try setting up an exit strategy earlier on in the date. You can say your roommate might need the computer in an hour, so you only have a certain allotted amount of time to talk. That way, if things aren't going that well, you already have an excuse prepared.

If they try to ask you out for another date and you're not feeling it, just be honest and turn them down gently — even if you feel tempted to ghost. "We already feel alone and isolated as is," Berzack says.

However, it's totally OK to immediately close your computer or hang up on someone who's being inappropriate or disrespectful. You can even block them without another word, if that's what it takes. As Berzack says, "There's no need to people please in situations where you are being harassed or made to feel uncomfortable."