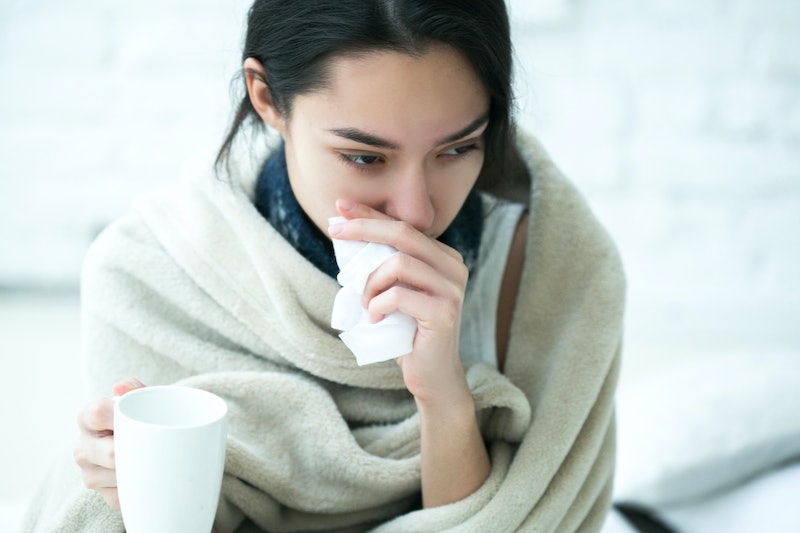 Flu season is never good. We brace for it each year, comparing notes on if and how to get a flu shot, and swapping flu-related horror stories that often convince the flu shot-opposed among us to run straight to the doctor and beg for mercy. Not all flu seasons are created equal, though, and 2018's might be particularly nightmarish. The Center For Disease Control has announced that the 2018 flu season has reached near-epidemic levels earlier than usual — and that the strain of the flu that's being seen is more dangerous than others. You're going to want to know how to protect yourself against the flu if you want to avoid some serious symptoms.

Per The New York Times, the 2017-2018 winter flu season is shaping up to be what experts would call "moderately severe," thanks to a perfect storm of widespread cold weather conditions, imperfections in this year's vaccine, and an influenza subtype that's nasty to begin with. Approximately 80 percent of the flu cases reported this season are of the H3N2 strain. According to VeryWell, there are manydifferent variations of influenza that wreak havoc on the population from year to year — see, the virus mutates, so it can be difficult for anyone to predict what's ahead for an upcoming flu season. As a result, H3N2 came as a surprise this year, and the vaccines (which are prepared months in advance) weren't totally equipped to fight it effectively.

Per VeryWell, "history has shown that seasons in which H3N2 influenza A is the dominant strain have been more severe." While symptoms are similar between this and other subtypes — think body aches, fever, headaches, sore throat, vomiting, exhaustion... basically, you name it — people who come down with the flu this year might find those symptoms are exaggerated thanks to H3N2. The situation is made worse, of course, by the fact that our vaccines weren't totally prepared to handle this icky brand of the flu. The unforgiving winter weather in many parts of the country also doesn't help.

While the flu shot seems not to have been a guaranteed recipe for prevention this year, there are a few other things you can do to try to stay healthy until we're out of dodge (flu season peaks between December and February, according to the Centers for Disease Control and Prevention). Here are some stay-healthy tips:

While the flu shot isn't foolproof, Dr. Anthony Fauci — Director of the National Institute of Allergy and Infectious Diseases — still says that vaccination is the most important flu prevention strategy. "It is always better to get some degree of protection than to get none by avoiding the vaccine," Dr. Fauci tells Bustle. Even mid-way through flu season, it's not too late to get the shot, he says.

This might sound like a no brainer, but it's harder in practice. If your friend is complaining of headaches or a sore throat hours before you have plans, insist that they stay home (and tell them to see a doctor, of course). If the CDC tells you to cancel, you cancel.

3. Lay Low If You're Not Feeling Well

Even a mild cold can compromise your immune system, making it harder for you to fight off the flu if you happen to be exposed to it. Plus, if you turn out to be the one nursing the flu yourself, you need to rest — and you don't want to be responsible for giving it to anyone else. If you have flu symptoms, the CDC actually recommends that you "stay home for at least 24 hours after your fever is gone... (without the use of a fever-reducing medicine)."

Dr. Fauci advises that you stay away from crowded, tightly-packed areas during flu season. In a large group of strangers coughing and sneezing, you never know what germs are being passed around.

Fight germs by washing your hands with warm soap and water whenever you can. Alcohol-based hand sanitizer also works. Getting into this habit helps prevent the flu, but — let's be honest — it's also just cleaner.

According to the CDC, germs can be most easily spread through your eyes, nose, or mouth. Keep your hands far, far away from these ares to minimize exposure to any flu germs that you may have accidentally picked up.

Now is the time to up your cleaning game so you can kick errant flu germs to the curb. The CDC suggests you pay special attention to frequently touched objects and surfaces like doorknobs, keyboards, and phones.

According to a WebMD list of doctor-approved tips for avoiding colds and flu, proactive exercise is a great way to make yourself more immune to lurking illness. Light workouts can boost your immune system so that you can more easily fight the flu.

Per U.S. News, echinacea, elderberry, and goldenseal all have flu-fighting properties that can help keep you in the clear until flu season passes. These natural remedies stimulate the immune system, raise white blood cell count, prevent inflammation, heal mucus membranes (yuck), and more.