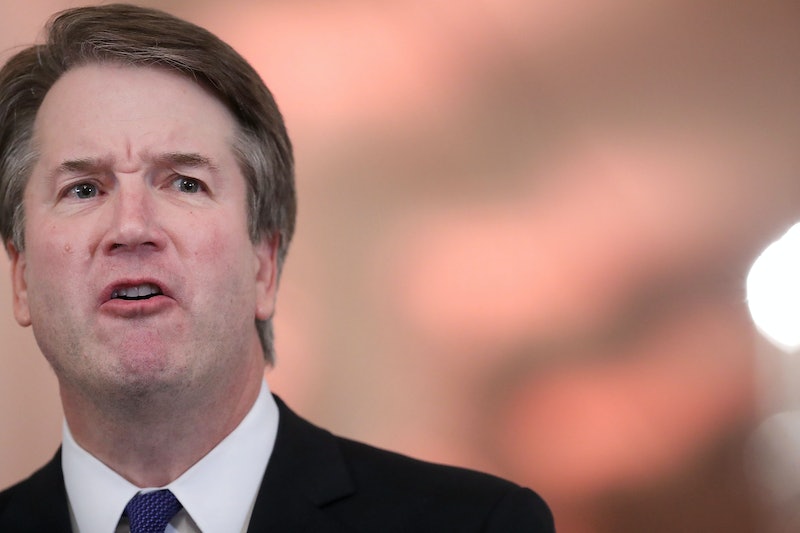 President Trump has nominated D.C. Circuit Court judge Brett Kavanaugh to serve on the Supreme Court, and his confirmation could spell the end of abortion rights in America. If you want like to protest Kavanaugh's nomination to the Supreme Court, you've got a few options.

Be warned, however, that Democrats and the left have very little leverage in this political fight, and at the end of the day, Kavanaugh is very likely to be confirmed. The reason is simple. Republicans hold 51 seats in the Senate, and only 51 votes are needed to confirm a Supreme Court nominee. As many people have pointed out, the odds of a Republican senator torpedoing the nomination of a conservative judge to the Supreme Court are practically zero, given how the enormous influence each and every Supreme Court judge holds over public policy. Moreover, it's not a given that every Democrat will oppose Kavanaugh; in 2017, Democratic Sens. Joe Manchin, Heidi Heidtkamp and Joe Donnelly all voted to confirm Neil Gorsuch, Trump's first Supreme Court nominee.

That said, anybody looking to protest Kavanaugh's nomination should start by calling Republican Sens. Lisa Murkowski and Susan Collins. They're the only two Republicans in the Senate who support abortion rights, and given that Kavaunagh's confirmation could result in the overturning of Roe v. Wade, it's at least conceivable that Murkowski and/or Collins might oppose his nomination. If they vote against him, he won't get confirmed — if, that is, every single Democratic senator votes against him.

To that note, anybody who's anti-Kavanaugh should apply pressure not only to Murkowski and Collins, but to Democratic senators who represent red states — that is, Manchin, Heidtkamp, Donnelly and Alabama Sen. Doug Jones.

But the best way to protest Kavanaugh's nomination may be to look beyond his appointment, and instead focus on the long-term future of the court. Anybody who opposes Trump's latest pick should demand — loudly and often — that Democratic candidates make the Supreme Court their number one campaign issue in the 2018 and 2020 elections, and work as hard as possible to ensure that Democrats win big in those two elections.

The most immediate reason for this is that if Democrats are successful in one or both of the next two elections, Trump might not get to appoint any more Supreme Court justices at all. This will depend on when the next justice retires or dies, of course, which is impossible to predict. But if a Democratic presidential candidate wins the 2020 election, Trump won't have the ability to appoint another judge to the high court after January 20th, 2021 — that is, the next inauguration day. If nothing else, defeating Trump in 2020 will prevent the court from sliding even further to the right.

But the 2018 election is arguably just as important, because a Supreme Court nominee can't be confirmed without the Senate's approval. This means that if Democrats retake the Senate, they can singlehandedly block Trump from making any more Supreme Court appointments after the new Congress is sworn in in 2019.

Ensuring Democratic victories in 2018 and 2020 would also give Democrats the chance to counterbalance Kavanaugh's appointment by packing the court. In this scenario, which has been endorsed by political science professors, a lecturer at Harvard Law and even a former ethics chief for George W. Bush, Congress would pass a law increasing the number of Supreme Court justices to 11 (or more), and the (Democratic) president would appoint judges to fill these newly-created seats — effectively cancelling out the effects of Trump's appointments on the court's ideological balance.

It's a radical idea — but no more radical than Sen. Majority Leader Mitch McConnell's decision to block Barack Obama's last Supreme Court nominee for almost a year so that Trump could appoint a conservative justice instead. That strategy paid off big for Republicans, so there's no reason an equally-audacious plan can't work for Democrats — if, that is, the base demands that they pursue it.

Polling evidence has shown that Republicans are much more likely than Democrats to take the Supreme Court into consideration while casting their votes for president. Progressives would be wise to try and change this dynamic, because the next two elections will give Democrats a chance to reshape the court just as much as Trump has, and possibly more.

Of course, there's nothing wrong with staging a literal protest outside of the Supreme Court itself in opposition to Kavanaugh's appointment, as many activists have already done. Public displays of opposition are important. But in terms of having a lasting effect on the judiciary, calling moderate senators, lobbying Democrats to campaign on the court, and working to elect Democrats may be the best strategies for protesting Kavanaugh's appointment.