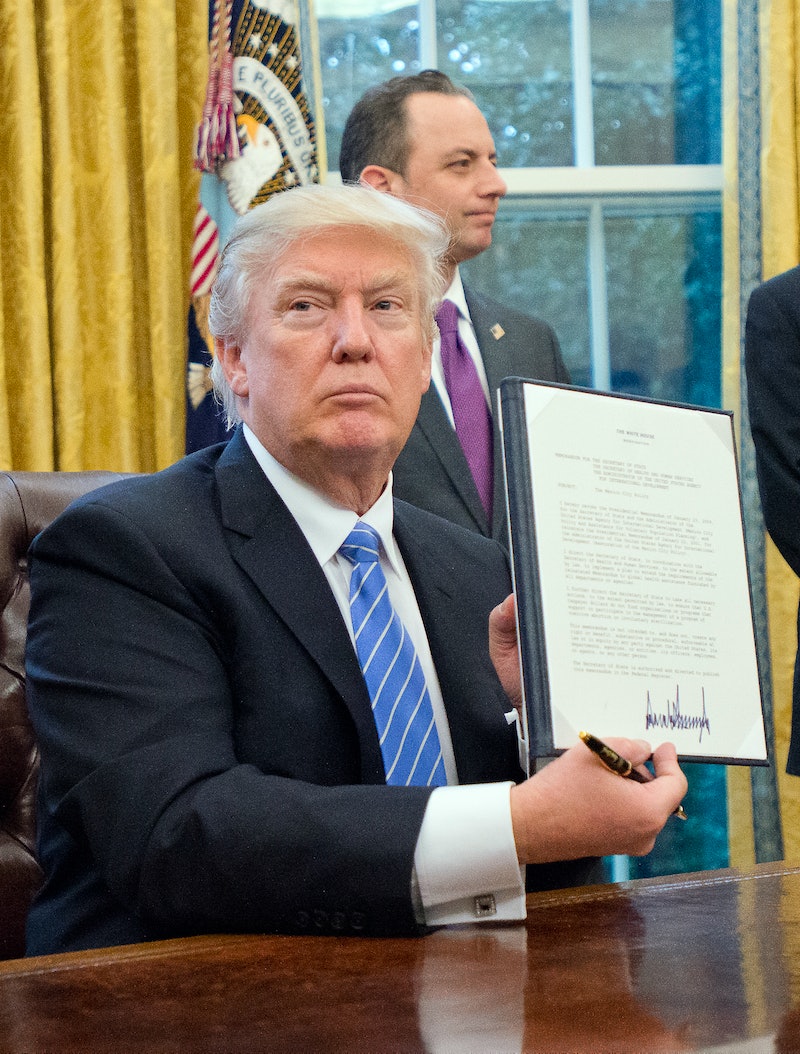 After a mere few days in office, President Donald Trump has reinstated the "Global Gag Rule," which had been repealed under the Obama administration. If you're not familiar, the Global Gag Rule states that any overseas organization receiving aid from the U.S. will legally no longer be able to have anything to do with abortion — meaning you're going to want to know how to protest the Global Gag Rule ASAP. Yes, this morning, in front of media and all of America, surrounded by a line of stern-faced men, Trump signed an executive order taking away the rights of millions of women internationally.

This means that international health organizations are now federally banned from offering counseling or services that pertain to abortions in family planning clinics. So not only can U.S.-funded health workers not perform abortions, but they also can't even talk about it for the sake of educating women and families about their options. The Gag Rule also keeps international health workers from supporting abortion rights, regardless of their personal beliefs. And while this rule tends to be reinstated every time a Republican president takes office — dating back to 1984, when Ronald Reagan originally implemented it — there's no shortage of outrage in response to the news of the reinstatement today. If you're interested in getting involved in protest efforts, here are the options available to you right now.

Educate Yourself And Others

Take the time to research the Gag Rule, also known as the Mexico City policy, and talk to your friends and family about it. Awareness is the first step toward change, so get the conversation going. Make sure the people you have access to know what's going on, know what the effects of the policy are and know the severity of it. It's so easy to be overwhelmed by policies that are confusing and complex, so help out your friends by explaining to them what Trump is up to and why it's significant.

Reach Out To Representatives

Call, write letters, send emails, reach out to your local representatives and let your voice be heard. Get your friends together and have a letter-writing party. Share the local phone number, street address, or email address of your local representatives with your friends and family to make it easier for them to reach out and lend their voices to the cause. You're not too small to make change. Your voice is powerful, and the world needs it.

Keep a look out for local and national protests. Whenever you have the opportunity to participate, do so. Share the information on your social media, and make sure you let everyone in your network know that you're protesting and would like their support as well. There's no such thing as oversharing when you're protesting a policy that will endanger people's lives.