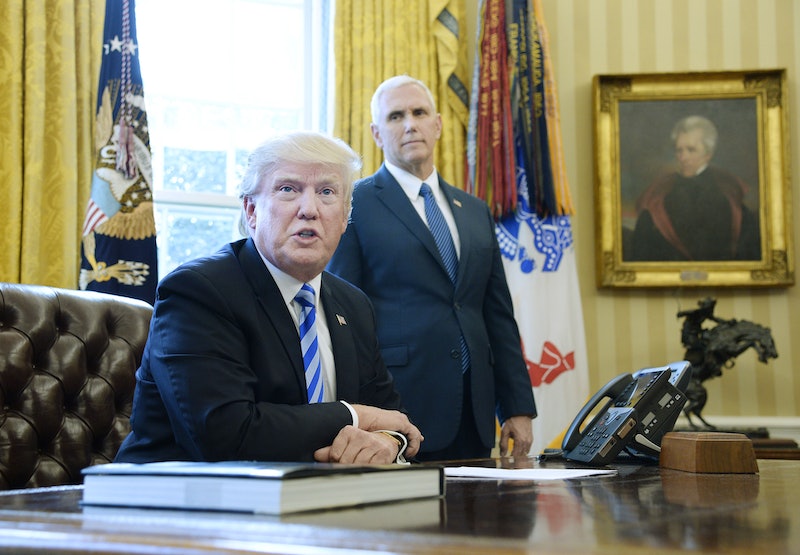 The seven-year-long effort carried out by House Republicans to repeal and replace Obamacare finally came to a House vote on Thursday. Despite a dismal prior effort, Republicans in the U.S. House of Representatives were confident about the revised version of their American Health Care Act (aka Trumpcare). After securing the support of the conservative Republican group the Freedom Caucus, North Carolina Rep. Mark Meadows, who heads the caucus, told MSNBC's Morning Joe, "We're optimistic that we'll pass it out of the House [on Thursday]." The American people, however, aren't happy. But instead of despairing, there are ways to protest the Republicans' health care bill that can make an impact. UPDATE: The AHCA has officially passed the House with a majority of votes, 217 to 213.

The most effective way to protest the AHCA — and, really, any legislative action — is by calling your representative. Regular citizens will have to declare to the members of the Congress that they reject the GOP's health care bill in clear and decisive terms. Congress should be made fully aware that millions of Americans know the AHCA will cause them to lose their health care coverage and face higher premiums, as well as offer huge cuts for big businesses and investors.

By letting their representatives know that these cuts are being made on the backs of impoverished and marginalized Americans, people can hold them accountable for their actions on the American Health Care Act. Perhaps the best strategy is by simply enunciating the numbers, because health care in America often comes down to a numbers game.

According to The New York Times, this Republican replacement plan will lead to a purported tax cut of billions of American dollars for health insurers, drug-based enterprises, medical device enterprises, and top earners. In addition to that, a reported $880 billion will be slashed in federal funding for Medicaid. It's imperative to assure lawmakers that their constituents are not only aware of these egregious tax cuts, but are also entirely opposed to them.

Being an active part of a society is the way to keep a democracy alive. People can easily contact their representatives in the Congress by simply going through this detailed directory of names and numbers for respective states. Whether your representative supported the repealing of the Affordable Care Act or opposed it, being in the loop with these figures is crucial to demand their acknowledgement of your participation and refusal to be complacent.

Protesting the AHCA is also going to require a holistic effort from not only everyday citizens but also the civil society and media. Progressives should refuse to be complicit in any of the repealing efforts while media outlets will have to step up their criticism and highlight exactly how the AHCA may hurt some 24 million Americans.

It is incumbent upon the media to report the Affordable Care Act in its historical context, the issues moderate and ultra conservatives took with it, and their legislative response to it in the form of the American Health Care Act. After all, an informed media equips people to form a crucial and effective response.

Despair is a natural reaction to something as extreme as the American Health Care Act, which will devastate millions of Americans, but panic can have an insular effect on people. That is the last thing the public needs in the face of a repeal so colossal. A unified, informed, and relentless response to the Republicans' health care bill is needed now more than ever. The idea is simple: Get heard by getting active.