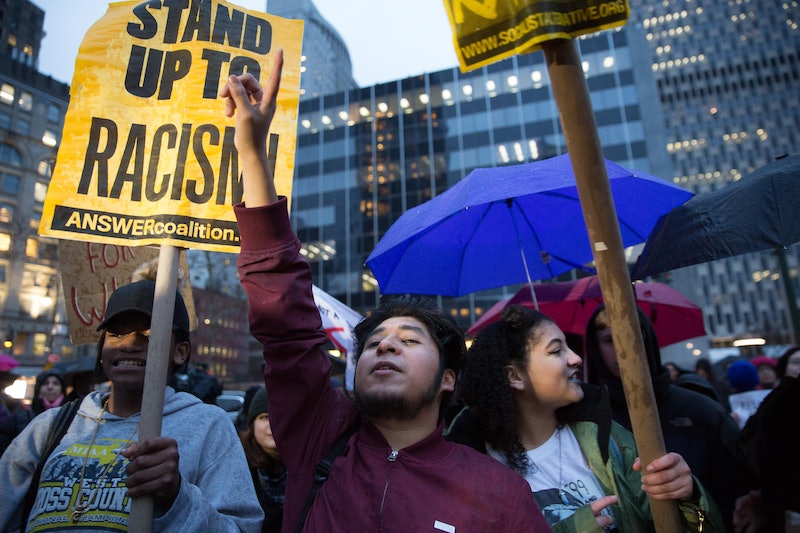 On Wednesday night, I attended an immigrant and Muslim rights protest in downtown Manhattan. The march started at Foley Square and headed toward the federal immigration offices to express anger at Trump's executive order restrictions targeting immigrants, refugees, and travelers from seven Muslim-majority countries. According to the latest local reports, I was one of 1,000 people there.

At the march, I asked a woman named Vasi why she was protesting, and she told me: "I'm not the kind of person who goes to rally. The fact that you see me here is because, let's face it — everybody needs to stand together against Trump." A young woman next to her named Carol joined in the conversation and said to Vasi, "Have you started organizing yet?"

Carol's question was an important one. In the past two weeks since Donald Trump became president, and especially since he signed this highly controversial executive order, massive protests have popped up nationwide. The Women's March was planned in advance by a team of committed organizers across the country, but there have also been many examples of activism in the past week that were spontaneous and sudden.

To those protesting, the fire in their bellies that makes them take to the streets without urging is encouraging. But from looking at other successful nonviolent movements throughout the world, it's clear that turning unplanned moments into carefully orchestrated action is the most important next step.

"Spontaneous protest are important because they reveal a lot of information about the capacity for future organizing," University of Colorado professor Erica Chenoweth tells Bustle.

It's not really about making Trump change his mind about things. It's about other people — whether they're Congresspeople, civil servants, economic elites, or others who are required to cooperate. It's making them not cooperate.

Chenoweth researches nonviolent resistance movements, and her work has found that nonviolent protest movements are significantly more effective than their violent counterparts. She's also found that the key to those movements being successful lies not just in popular support, but also in leaders knowing how to use it effectively. And while she sees the spontaneous protest this week as a good start that allows activists to see how big the movement is, the next step has to not just be bigger, but smarter.

"Ideally, there would be a meeting of the minds between the different groups organizing these things to kind of step back and think about how they actually want to organize the many millions of people who have suddenly shown themselves to be available," Chenoweth tells me. Typically, groups take this time to train the activists or to plan strategies beyond protests, such as boycotts, sit-ins, or strikes. Those latter acts can allow the movement to go from simply defensive, as it is now, to active.

“Part of the reason why we’re seeing these protests right now is that we’re in reaction mode,” Chenoweth says. To get beyond "reaction mode," Chenoweth says movements need to not only express their anger, but channel it into a specific goal — a piece of legislation, an action by the executive branch or a company, action by voters — that they can advocate for. "Then the other side knows what they have to do in order to make you stop."

Targeted protests are also important because of the way they raise the costs of collaborating. "It's not really about making Trump change his mind about things. It's about other people — whether they're Congresspeople, civil servants, economic elites, or others who are required to cooperate. It's making them not cooperate."

A perfect example of this can be found this week in the decision by Harley-Davidson to cancel a visit by Trump to one of its factories on Thursday over fears of resultant protests. A PR move that might have benefited Trump's push for manufacturing jobs had to turn into a quick meeting at the White House. Similarly, the #DeleteUber movement, wherein people opposed to Trump's ban boycotted the ridesharing app after it sent cabs to JFK airport even as the New York taxi union went on strike, was followed by Uber coming out strongly against the ban and donating millions to a legal defense fund. Shortly before this article was published, Uber's CEO, Travis Kalanik, resigned from Trump's economic advisory council.

For the resistance to succeed, it needs more moments like this, in which the cost of helping Trump enact his agenda becomes too high for those who would implement it to do so. But activists should be careful as well. Spontaneous protests have more possibility for violence — and also for alienating potential allies, which is the biggest danger for the growth of a movement.

Chenoweth's work suggests there is a 3.5 percent of population threshold, after which nonviolent movements become hard to stop and are almost always successful. She joined Jeremy Pressman at the University of Connecticut in tabulating the number of people at Women's Marches around the country and found that around four million people marched — a little more than 1 percent of the United States. In order for the movement to really be able to work, it will need to be more than that, and the people who have joined the marches will have to do a lot more than just walk through cities.