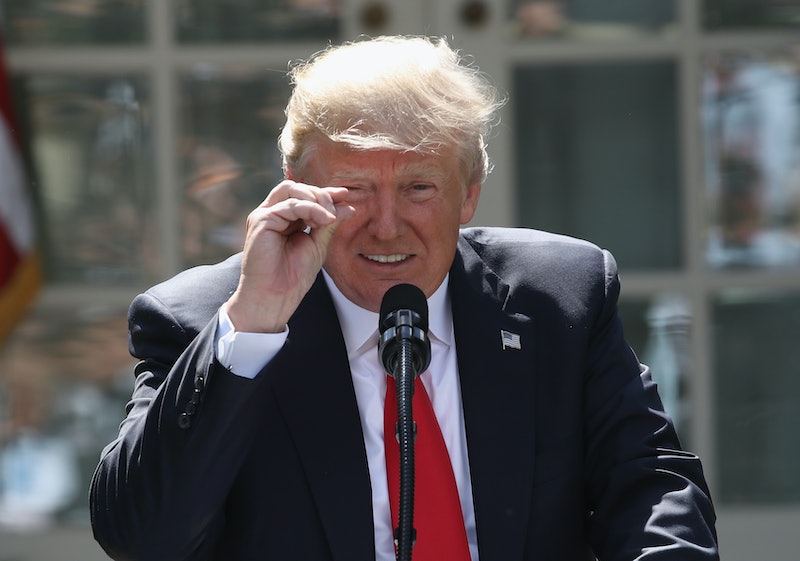 If you believe that the consequences of such a blatant abandonment of a globally agreed-upon accord are too high to be ignored, you're not alone. Prior to the announcement, when it was not clear whether Trump would pull back from the accord, the United Nations' secretary general himself, Antonio Guterres, implored Trump to stick with the 2015 Paris agreement.

Guterres' reason for urging the United States to remain committed to the accord was simple and based on the country's political and economic power. Remaining within the agreement was "obviously a very important decision as the United States is the biggest economy in the world," Guterres told the BBC. Here are some ways you can take action against Trump's decision.

Your voice matters. Make yourself heard by joining a public condemnation of Trump's withdrawal with a critical agreement on protecting our world. Since the United States emits the highest amount of carbon emissions in the history of the world, its role in reaching the goals for the Paris climate agreement should be treated with utmost dedication. Demanding that and more in public places critical pressure on the Trump administration to address these legitimate concerns.

An open letter to Trump on climate action himself can help. Highlight how America's absence in the Paris climate accord will devastate the world and leave behind a volatile power vacuum in the agreement.

3. Get In Touch With Your Senators

Go through the U.S. senate directory and find your senator in the list provided on the website. Call them at the number provided and demand that they focus on this issue of global warming and bring their colleagues on the same page. Such a call leaves an impression on politicians and shows that the people they presumably represent are fully aware of the repercussions of high-level political activities in the country.

A direct call to the EPA will let the agency know that you are cognizant of the social, political, and environmental implications of such a withdrawal. The number is 202-564-4700. You can call that number and protest Trump's abandonment of the Paris climate agreement by speaking with an official at the agency.

5. Go To A Regional EPA Office

The EPA maintains offices in Boston, New York, Philadelphia, Atlanta, Chicago, Dallas, Kansas City, Denver, San Francisco, and Seattle. Going to these regional EPA offices and demanding the agency place pressure on Trump is one of the ways you can act on holding the administration accountable.

Town hall meetings garner a lot of media attention these days. You can attend a town hall meeting if your senator or representative holds one by checking the contact page for the Senate listed above or simply going through the House's websites. By publicly calling attention to this matter, the town hall meeting can be a great venue to bring people together and go forward on climate action as a united front.

7. Pen A Letter To The Editor Of Your Local Paper

Politicians are keenly aware of the power of local papers. They may not bring it up as a conversation point but high-level political figures know how local papers can resonate with communities. If you feel passionately about the Paris climate accord and Trump's decision to withdraw, you should write a letter to your local paper's editor and make a case for America to remain committed to the agreement. You can highlight how global warming is affecting your local community, how climate change is becoming more and more pervasive, how it is bringing unnatural changes to animal life, and more. In simple language, you can make the case for better climate action.

The most important element for any protest to be successful is hope. While it is a remarkably tense moment in the political landscape of the United States, perseverance, commitment to truth, and solidarity can make pro-environment climate action viable and effective.