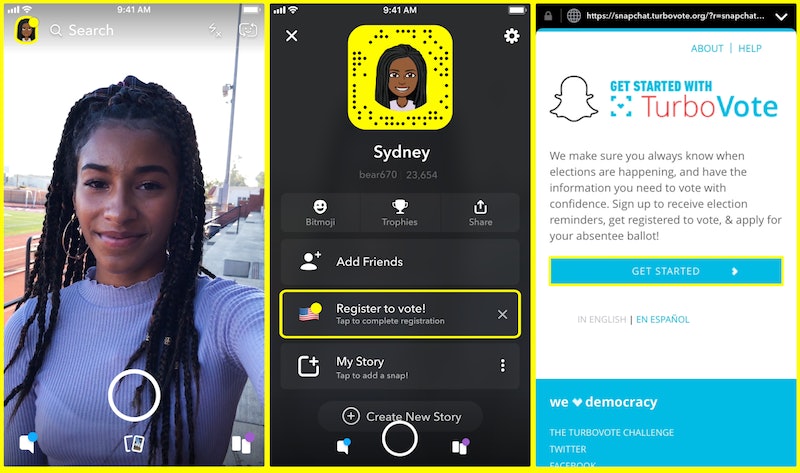 Today is National Voter Registration Day — and that means that it's time to make sure you can have your say in elections. The 2018 midterm elections will take place on Nov, 6, and you've probably seen predictions about the results in headlines for awhile now. If you recently celebrated your 18th birthday, you'll also get the chance to experience another (super important) first soon: registering to be a first-time voter. The process can seem confusing or daunting if you're new to it, but luckily there are a ton of resources at your disposal to help you register as quickly as possible — especially if you know how to register to vote on Snapchat, using the app's latest tool.

As we get closer to the 2018 midterms, Snapchat has officially launched the largest voter registration effort the platform has ever seen. The team has taken steps to actually build voter registration into the Snapchat app for every 18+ user — which they mention is roughly 80 percent of everyone on the app. In 2016, the social networking app used advertisements and other creative promotions to encourage people to vote, but they're stepping it up this year. When you open the Snapchat app, you'll find a simple voter registration on the User Profile page, where you can get all the information you need. If you need a reminder, look out for a custom video Snap from Team Snapchat that'll give you a super quick-and-easy link to register.

"We're working hard at Snap to engage, inspire, and register eligible voters this election season through creative, product-driven launches. Voting is one of the most important forms of self-expression we have, and we're committed to empowering our community to register and vote for their chosen representatives," explains Jennifer Stout, Snapchat’s Global Head of Public Policy, in a press release. Snapchat's voter registration initiatives are innovative and pretty amazing. After all, the company reports that roughly 80 percent of Snapchatters in the US are of voting age, they can reach up to 30 million 18-24 year olds through multi-week campaigns, and has 100 million monthly active users in the U.S. and Canada — they're getting the message out to people who need to see it.

So, how will you actually register? Beginning today, all 18+ Snapchat users will see a voter registration link from the User Profile page: “🇺🇸Register to Vote! Tap to complete registration.” According to the company, it will link directly to a made-for-Snapchat TurboVote mobile site, where you can actually register quickly and easily (the site will also be available in Spanish). You'll also get to try out Snapchat's National Filter, made to raise awareness about National Voter Registration Day, so that users can celebrate voting and encourages friends to (basically the 2018 version of an "I Voted!" sticker).

Snapchat is seeing another first: the app's Discover Partners will be producing relevant content allowing users to swipe up in the app to the TurboVote page without ever leaving Snapchat. You'll see content from the Washington Post, NowThis, Mic, Vice, Refinery29, Mitu, Cheddar, Good Luck America and more. Snapchat's News Team will also be encouraging 18+ users prompt users to discuss the issues that are closest to them in this election cycle — where they'll also have easy access to the TurboVote site.

Snapchat reports that voter turnout for young people is historically low — only 17.1 percent of 18-24 year olds (less than 1 in 5) voted in the US midterm elections in 2014. The tides are turning, though: Harvard University’s Institute of Politics reported a statement via their latest Youth Poll that “this generation of young Americans is as engaged as we have ever seen them in a midterm election cycle.” "

37 percent of Americans under 30 indicated they will ‘definitely be voting’ compared to 23 percent who said the same in 2014," Snapchat explains. Go register to vote if you haven't already — your voice needs to be heard.