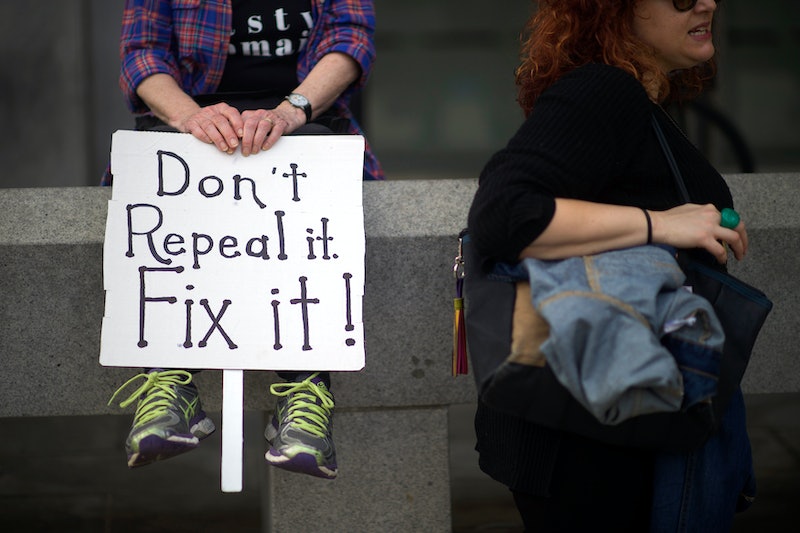 As a politician, the one thing scarier than a room full of reporters must be a room full of angry constituents. Tom MacArthur would know. He's the New Jersey Republican congressman who offered up the aptly-named health care amendment that allows states to opt out of pre-existing condition rules set in place under Obamacare. Well, plenty of his constituents are none to happy, and his town hall on Wednesday night proved it. Didn't tune in? You can still rewatch MacArthur's town hall.

The event was highly attended by the news media, and some outlets have posted it in its entirety online, including VICE News, who uploaded the event to its Facebook page. There's also a version uploaded onto YouTube, but it's broken into two parts. The town hall stretched some four hours, so if you do plan to rewatch, you've made quite the commitment to the democratic process.

It's likely worth it, though, and not just for democracy. MacArthur was skewered by his constituents. The local paper, The Burlington County Times reported that the meeting "featured almost continuous booing and shouting from angry constituents." This is not a surprise given MacArthur's role in bringing health care reform back from the dead. It was his conservative amendment that brought the Freedom Caucus on board and helped pass the bill through the House. "It’s yours. You own it," one constituent told him.

Naturally, the vast majority of the town hall focused on health care. There were long speeches by individuals who shared their own stories. One constituent, Geoff Ginter, shared his fear of losing his job now that the bill has been brought back. His wife, Colette, had cancer, a pre-existing condition, NJ.com reported. "If I lose my job for any reason, my wife is not going to have any health insurance," he told the representative.

One other topic that came up a few times was the Russia investigation. MacArthur said that he didn't support an independent congressional investigation at this time because it's too early to know what the FBI is going to uncover. The crowd didn't like that, either.

What you must give the congressman credit for is turning up at all. The town hall was held in a part of the district where just 12 percent voted for him. "I came to this town because I want to meet with my constituents and tell you the things that matter to me, the things I'm doing and why I'm doing them," MacArthur told the crowd. "In this part of the district, there are 40,000 more Democrats than Republicans."

His votes have thus far not been representing the needs of these constituents, those in attendance argued. But MacArthur's answer is that he's representing those who do agree with him. "I hear your anger and I feel all the angst in this room. But when I drive across the Pinelands (to Ocean County) for every one of you there’s someone who disagrees with you," he told the crowd.

That answer wasn't good enough for those in the room, but what will happen in 2018 is anyone's guess.