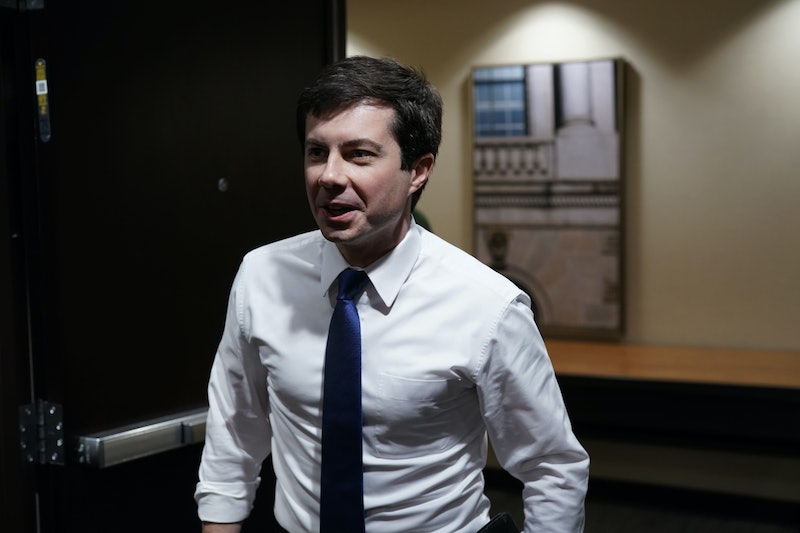 He might have announced his 2020 intentions months ago, but people are still having trouble figuring out how to properly say half of his name. Luckily, this video on how to say Pete Buttigieg's name will clear everything up. This newfound knowledge will definitely come in handy for you over the coming months, given Buttigieg's recent confirmation that he has enough donations to appear at the primaries in June.

Aaron Nemo, a writer at The Late Show with Stephen Colbert, released a video on Twitter in which he playfully explained how people should pronounce Buttigieg's last name. Put simply, the pronunciation offered by Nemo is "Boot-edge-edge." Butigieg's campaign seems to reiterate that pronunciation, as shirts with "BOOT EDGE EDGE" are available for sale on the official 2020 campaign site for the Indiana mayor.

Ironically, Buttigieg himself doesn't pronounce his last name that way. When introducing himself or talking about his name's tricky pronunciation, he says "Boot-a-judge."

Buttigieg's husband, Chasten Buttigieg, acknowledged this discrepancy in a tweet last December, explaining that there's more than one proper way to say their last name. In the tweet, Chasten endorsed the following four pronunciations of his last name as technically correct: "boot-edge-edge or Buddha-judge or Boot-a-judge or Boo-tuh-judge."

According to The Cut, the mystery around Buttigieg's last name first began in December 2017, when Buttigieg ran for chair of the Democratic National Committee.

Two years later, a January 2019 profile of Buttigieg in The Atlantic noted that a large portion of interest around him in the early stage of his presidential campaign had to do with confusion around the pronunciation of that last name. But Buttigieg had no problem explaining why he thought voters would give him a chance in the coming months. To the publication, he said,

I’m not like the others. And that’s going to be really important. The other thing is, ‘How much depth is there to your account of how America works, how politics works, and where the world is going in our lifetime?’ Mine will have to be an account of how the country and the world works, which makes more sense than what the others are saying.

Though Buttigieg's last name might have taken some time to get used to, he's hardly the first politician to deal with that particular challenge. The Huffington Post offers a roundup of the some of the most unconventional names of U.S. politicians throughout American history, including but not limited to: Barack Obama, Young Boozer, Butch Otter, Cherubusco Newton, and more.

In a December, 2016 letter published to Medium, titled "A letter from flyover country," Buttigieg addressed the confusion many people have around his name. He wrote, "Most people have trouble pronouncing my name, so they just call me 'Mayor Pete.' My surname, Buttigieg (Boot-edge-edge), is very common in my father’s country of origin, the tiny island of Malta, and nowhere else."

Buttigieg continued, "Dad came to America in the 1970s and became a citizen; he married my mother, an Army brat and umpteenth-generation Hoosier, and the two of them settled in South Bend, Indiana, shortly before I was born thirty-five years ago."

Next time someone asks you if you can pronounce "Mayor Pete's" last name, you can go one step further and explain the origins of his name, as well.