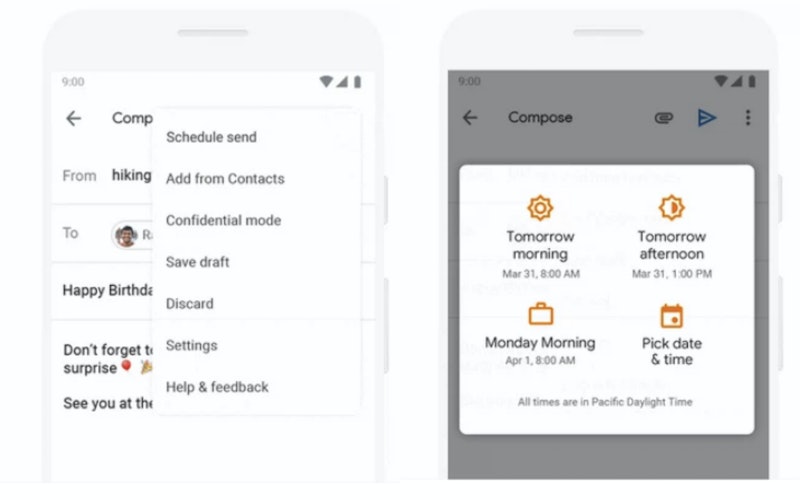 Someone get Gmail a cupcake, because the service celebrated 15 years of existence on April 1. It is hard to image present day without Gmail; now it's so popular that you can only get an email with your name on it if you have a zillion numbers on the end of it, too. In honor of the milestone, the service is rolling out some new features on one of its primary programs. With the new Scheduled Send feature, you will be able to schedule emails on Gmail with just a few clicks of a button.

According to a blog post from Google, the feature called Scheduled Send allows you to, well, schedule for an email to be sent at a future time. The website describes everything this new detail can do, saying "Get an email off of your to-do list after business hours, on weekends or when the recipient is out of office — but without interrupting their downtime. Now you can write an email as you normally would (or while it’s on your mind), but schedule it to be sent once the recipient is back on the clock." Essentially, no more bothering people while they're on vacation or off-hours from work — you can schedule it to get sent during business hours, and not worry about forgetting to hit "send" later.

Another important aspect of Scheduled Send you might not have considered: it is a lifesaver when it comes to sending emails at specific times across different time zones. Beijing may be 13 hours ahead of New York, but that doesn't mean your email needs to be sent at midnight anymore.

The GIF above demonstrates where you can find the new feature in the updated Gmail — simply toggle to the options bar in the top righthand corner of the screen to find "Schedule send," which will then prompt you to choose a time and date to fire off your email. And voila! You're all set.

Another new feature you can expect in this update is an extension of Gmail's small greeting feature. According to the blog post from Google, this detail affects the process of composing an email, unlike Scheduled Send. Market Watch explains, "Gmail’s suggested text will now offer greetings and phrases that 'sound more like you'." This includes but is not limited to calling someone a nickname in a greeting. This feature, officially called Smart Compose, will also soon be included in mobile Gmail. It will also be modified to work with four new languages: Spanish, French, Italian, and Portuguese. Further, Smart Compose will also now recommend a subject for your email. Gone are the days of vague phrases like "Following up," at the top of your messages.

Rounding out the new features is one called "Dynamic Email," which aims to simplify and streamline the experience of multiple tabs. It has become kind of a joke among people who are easily distracted; but having many tabs open at once is the norm. Dynamic email will change that by allowing users to do things like, "respond[ing] to a comment thread in Google Docs; browse hotel recommendations and travel deals; submit an RSVP and schedule an appointment; or fill out a questionnaire right from the email message," without even opening a new tab. You can just do it right within the email.

According to aforementioned blog post from Google, all of these features began rolling out on April 1, exactly 15 years after the initial launch of the service. Leave it to Google to roll out something so game changing on April Fools' Day.