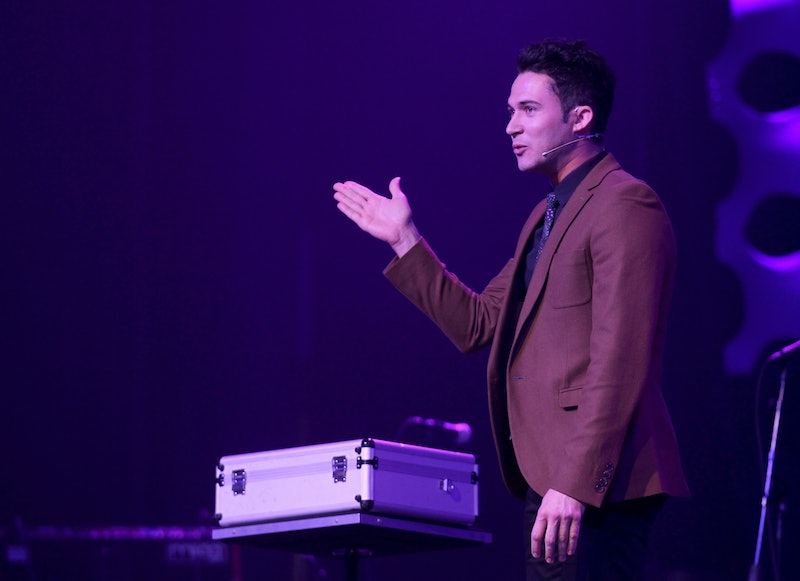 Justin Willman's Magic For Humans can feel more like a light-hearted prank show than a magic show at times. Magic For Humans, premiering on Netflix on Aug. 17, shows the magician creating illusions on the street, in classrooms, and while doing goat yoga for the amusement of those around him. If you don't have the good fortune to happen upon Willman while he's doing his magic routines in the wild for his show, you can buy tickets to Justin Willman's magic shows live on the road.

Magic For Humans stems from the comedic sensibilities that Willman seems to showcase in all of his performances. Magic For Humans is Willman's largest platform yet for delivering his magic tricks, but the tricks seen in Magic For Humans are still being seen through a television screen. Live magic removes the barrier between the performer and the audience, meaning that the reality of complex tricks can't be explained away by claiming the show cuts away or that CGI manipulates what is being seen. Basically, live magic is way better than TV magic, no matter how you slice it.

If fans of Magic For Humans want to see if WIllman's comedy holds up to the naked eye, they can see him on his Fake Believe Tour, which stops at the Arlington Drafthouse in Arlington, VA from August 31 to September 2 and Carolines on Broadway in New York City from Sept 27 to Sept 30. He doesn't have any shows listed beyond that, but chances are he'll be booking a lot more shows following the premiere of Magic For Humans. If you can't get to a live show, however, here's a little taste of what his live magic act offers.

During a visit to the Ellen Show, Willman had Ellen Degeneres color in a hypothetically outfit for the magician to wear, only for the magician to reveal that he had not only guessed what she would color in, but was already wearing the outfit she created.

A 2015 video of Willman and his wife, photographer Jillian Sipkins, went viral after they decided to incorporate a few gravity-defying tricks into their first dance. Sipkins also joins her husband occasionally during Magic For Humans, showing that Sipkis is happy to work with her husband whether it's for their wedding or for Netflix. As impressive as the dance is, chances are Willman's live shows may not feature quite as much choreography as this impressive first dance.

He Loves To Laugh

In 2015, Comedy Central aired Sleight Of Mouth with Justin Willman, a hybrid comedy and magic special. The special features discussions about virginity, a visit to a pot dispensary, and Willman smashing technology with a baseball bat. While the special may be a good indicator of WIllman's live persona circa-2015, the Willman of Magic For Humans seems a lot more subdued that the Willman of Sleight of Mouth.

While there are lots of clips of Justin Willman online, the only way to see for yourself what he's capable of is to see his act in person. Even then, however, there's no guarantee that you'll be able to believe what you've seen after seeing Willman's performances.