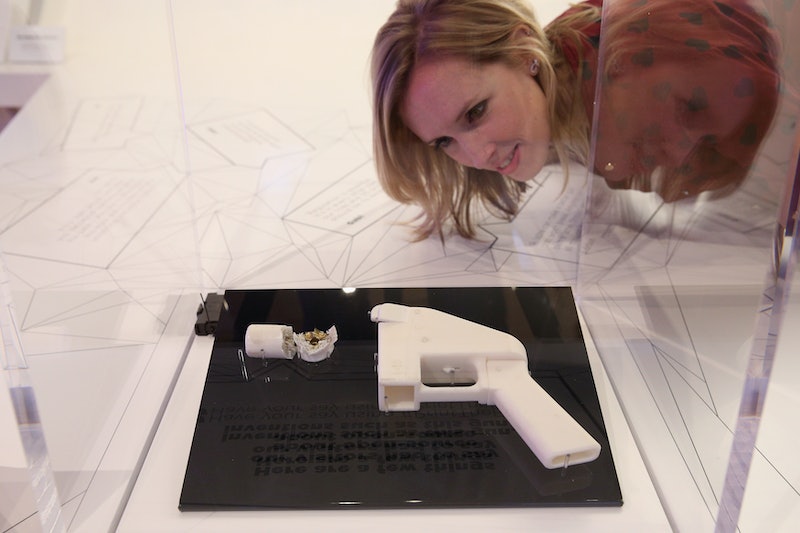 3-d prBeginning next month, Americans will be able to access gun blueprints online and use those blueprints to create guns with a 3-D printer, essentially producing "downloadable guns." If this sounds disconcerting to you, there are a couple of ways you can help stop downloadable guns from becoming readily accessible.

As USA Today reported, the aforementioned gun blueprints are set to become available online on Aug. 1. These blueprints were developed by an organization called Defense Distributed. The organization's founder, Cody Wilson, sued the U.S. Department of State in 2015 after federal officials removed his gun blueprints from the internet. The years-long lawsuit was recently settled and Wilson's models are imminently set to be back online.

Thus, if you wish to help stop plans for downloadable guns from becoming easily available, it is important to target the U.S. Department of State in your advocacy work. Indeed, Everytown for Gun Safety, a gun control nonprofit, recommends immediately emailing Secretary of State Michael Pompeo and requesting that Wilson's organization not be allowed to upload the blueprints. Everytown has a form email already available on its website that implores the State Department to take action, saying:

... The State Department can act to prevent this deadly and dangerous outcome. It should not grant this special exemption to endanger the public — and instead should continue to block this deadly information from being published online.

If you wish, you can fill out your identifying and contact information on Everytown's website and it will transmit an email with your signature to Secretary Pompeo.

In addition to filling out Everytown's State Department email, you can also further support gun control organizations if you wish to help stop the spread of downloadable guns. Consider donating to Everytown for Gun Safety and/or to the Brady Center to Prevent Gun Violence. As the New York Times reported, last week the Brady Center filed Freedom of Information Act (FOIA) requests to access documents related to determining how and why the federal government decided to settle the aforementioned lawsuit.

According to the New York Times, Defense Distributed plans to release files that instruct users how to print a variety of guns, including an AK-15-style rifle — the type of gun that has been used in multiple mass shootings.

Many have expressed concern that 3-D printing of guns could result in people circumventing existing gun laws. As USA Today explained, 3-D printed guns are generally untraceable and do not mandate a background check, because they are self-produced. David Chipman, an advisor at Giffords, a gun control nonprofit, and former Bureau of Alcohol, Tobacco, Firearms, and Explosives special agent, echoed these concerns to Vice News on July 18, saying " ... I imagine that people will also start printing guns to get around laws.”

Democratic Senator Chuck Schumer expressed similar sentiments at a press conference on Sunday, as reported by the New York Post. Schumer warned that he believes that substantial negative implications could result from the public having access to the 3-D gun blueprints, saying:

This online site shows you, how at your home, with a simple 3D printer, you can make a plastic AR-15, an AR-10, a very dangerous semi-automatic assault-style weapons out of plastic ... The danger that could happen can be enormous ... To have crazy people have easy access, to have terrorists have easy access to this kind of website and allow them to make plastic AR-15s undetected — so-called ghost guns — justifies the imagination ...

The Post also reported that Schumer's spokesperson said that the Senator plans to release a bill by the end of the week to address the untraceable, printable gun issue.

For his part, Wilson, Defense Distributed's founder, told the New York Times that he could understand how the outcome of the settlement and the availability of gun blueprints could appeal to people. “I can see how it would attract more people and maybe lessen the tactic of having to hide your identity,” Wilson said. “It’s not a huge space right now, but I do know that it’s only going to accelerate things," he added.

Right now, it looks as though 3-D printable gun plans will shortly be available online. Therefore, if you wish to take action to try to stop the publication of these plans, it is imperative that you do so as soon as possible.