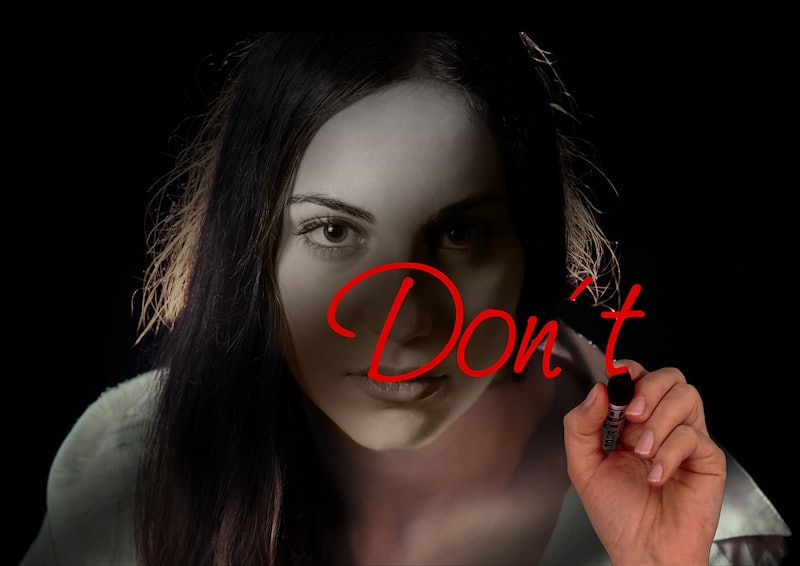 Some people have no problem saying "no." But for many people, especially women, the desire to please others often leads to saying "yes" to things you either don't want to do or for which you don't actually have time. Sound familiar? Here's how to stop saying "yes" to everything so you can take control of your destiny. “The ability to communicate ‘no’ really reflects that you are in the driver’s seat of your own life,” Vanessa M. Patrick, an associate professor of marketing at the C. T. Bauer College of Business at the University of Houston, recently told the New York Times. “It gives you a sense of empowerment.”

In a world of too many yeses, you might feel powerless to navigate your own life because you are over-committed to the needs of others. Psych Central notes that in many cultures, women are socialized to be passive caretakers, and often say yes when they really want to say no for fear of "making waves." And, while saying no might feel more difficult in the moment, it's more beneficial in the long run.

I have long been envious of these "no" people because I wish I could be more like them. A new study published in the Journal of Consumer Research suggests that altering the language you use to say no can help.

The research from Patrick and Henrik Hagtvedt, published by Oxford University Press, found that saying “I don’t” as opposed to “I can’t” might allow you to extract yourself from unwanted commitments. The study focused on "self-talk" — the way we talk to ourselves — as tool, and researchers predicted that changing the way you talk to yourself can help improve self-regulation, and facilitate empowerment in situations where you say yes when you really don't want to.

Personally, I have a hard time saying no because I have a fear of letting people down. This even led me to use a hairdresser for my wedding that I really didn't like. The woman was recommended by a friend, and because I didn't want to hurt my friend's feelings, I went to the salon for a test run. When she finished, and turned the chair toward the mirror, I wanted to cry. In general I never let other people do my hair, ever, because I always end up hating it. But instead of communicating this to the stylist, I heard the words "It looks great" come out of my mouth, and before I knew what was happening I was booking her to do hair for my entire wedding party.

According to the New York Times, using the words “I can’t” sounds like an excuse that’s up for debate. For example, if I had told her, "I can't afford it," she may have come back with a lower fee. Saying “I don’t” implies you’ve established certain rules for yourself, suggesting conviction and stability. If I had simply said, "I don't like it," or "I don't want anyone else doing my hair," that could have been the end of the conversation.

For instance, as part of the research, Patrick and her colleagues asked some subjects to sell magazines to the study participants, some of whom were instructed to decline. When subjects said “I don’t” versus “I can’t,” they were more effective in getting their point across, and the sellers were more willing to accept their refusal, the New York Times, reported.

Get Comfortable Being Assertive

If you know your boundaries, and set them clearly to others, you'll get more comfortable being assertive, and in turn others will learn to respect your "no."

Pretty much the only time I give a definitive "no" is when someone asks me for a ride to or from the airport. For people who don't live in a big city, this might sound like I'm being cold, but in Los Angeles, committing to taking someone to LAX (or picking them up) can not only eat up half your day, but it can induce road rage and anxiety that requires hours of meditation, yoga, or happy hour drinks to recover from.

When someone asks me for a ride, I simply say "I don't take people to the airport, ever." If I say, "I can't today; I have to work," that implies that I might take them on some future occasion when in fact I have no intention of ever taking anyone to the airport. I would like to get better at being this firm in other situations.

The New York Times article suggests that practicing being assertive when the stakes are low can help you learn to stand your ground. For example telling an aggressive vendor trying to get you to sample cheese at the farmers' market that you don't eat diary is easier than telling a co-worker that you don't take meetings during your lunch break. Getting comfortable with saying "no" to strangers is the first step to being able to bring it into your personal life. Additionally, having a few canned responses at the ready can help when you're put on the spot.

Sometimes we say "yes" because we're afraid to miss out on the fun. How many times have you done something because of FOMO only to get there and realize that you wish you were home marathoning Gilmore Girls on Netflix instead? On the podcast The Nerdist, Lauren Graham refers to this as "chasing the fun." Instead of enjoying where you are in the moment, you spend your time looking for something better, for example you might leave a party that is perfectly enjoyable because, "there must be cooler people at the next party." This becomes a vicious cycle, and most of the time when your chasing the fun, no fun is had at all.

Relationship experts Linda and Charlie Bloom wrote on Psychology Today that while our desires may be endless, in reality our time is limited:

Accepting the essential futility of trying to fulfill every desire we have is much wiser than indulging all of our impulses for gratification. Prioritizing certain activities enables us to let go of others. Decide what your highest priorities are and focus on them... Deciding what to prioritize requires us to cut off other options, but makes it possible to give clearer attention to those have heart and meaning for us.

If you're saying yes to things because of FOMO it might be time to evaluate your motives and get clear about what you really want. Life is short, and there is not enough time to say yes to everything. If you need to say no, that's OK.

“You have obligations,” Patrick told the New York Times. “But within the limits of your control, it’s about operating at the most optimal level.”

It might be hard at first, but in the long run you'll get to know yourself a whole lot better, and in turn feel empowered to take control of your life.