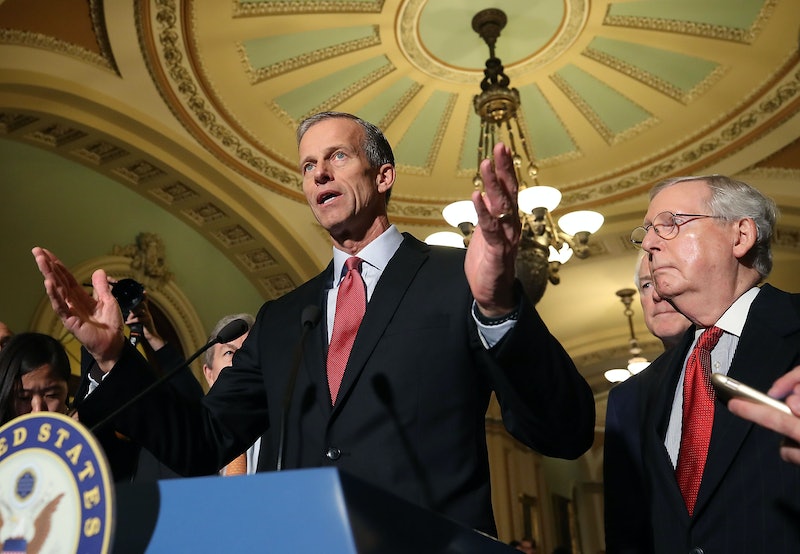 On Thursday morning, the GOP-controlled Senate reconvened to discuss Republicans' proposed tax overhaul. On Wednesday, the tax plan passed a procedural vote 52-48, with a final vote expected on Thursday or Friday. Republicans in favor of the bill have claimed that it will be a victory for middle-class families, but multiple reports indicate that the tax plan will have more long-term benefits for the rich. So how can you help kill the GOP's "tax scam," as it is described by its opponents?

A nonprofit volunteer organization called 5 Calls is trying to make standing up to the GOP tax plan a little easier by letting people know who to call to make their voices heard. The site's homepage has a "tax scam tracker," which indicates which senators are in favor of, against, or undecided on the tax plan. The bill needs 50 votes to pass, and according to 5 Calls, 45 senators are prepared to vote yes and 48 are opposed, while the following seven are undecided:

It is particularly crucial to focus on these seven senators, because they can still be swayed to vote against the bill.

After a significant amount of speculation and doubt from Republican Party leaders, Arizona Sen. John McCain announced his intention on Thursday morning to vote for the tax plan, which makes it more likely to pass. However, a debate on the bill is still ongoing, and it's not too late to call your elected officials to urge them to vote against the bill.

Nick O'Neill, one of the founders of 5 Calls, tells Bustle that the best way to tackle this issue is by calling elected officials in your state about provisions in the tax plan that specifically interest or pertain to you.

"We suggest that you make calls to your representatives (and not reps from other states) about specific provisions in the tax bill that Senators can use as leverage to say no," O'Neill tells Bustle.

Among these specific provisions could be the tax cuts for corporations, higher taxes for graduate students, and cuts to social programs like Medicare. Moreover, according to Vox, 61.8 percent of the tax cuts will go to the country's top 1 percent by 2027, and the tax plan may eventually take away 13 million people's health insurance.

O'Neill points out that focusing on specific issues, rather than the tax plan as a whole, can help senators better understand what really matters to their constituents:

There are still a lot of steps in this process before the tax bill is passed and any one of these items can become a senator's pet issue that prevents them from moving forward on this bill. This is important for senators that are already onboard to pass this bill at this point in the process, but also for the Democratic senators that already oppose it. Let them know you support them in their fight against this bill and they should feel emboldened that fighting for their constituents will be supported at home.

Many senators have between urging their followers on Twitter to call in and voice their opposition to the tax plan. Sites like 5 Calls facilitate this process: to find out who to call, you simply need to input your address or zip code on the site and you'll see the name of your elected official, their phone number, and a script you can use. If the line you call is busy, the site also provides local office numbers. The other option would be to call the United States Capitol switchboard at (202) 224-3121, and then ask to be transferred to the Senate office you want to contact.

As both O'Neill and many Democratic senators have made clear, calling your elected officials does make a significant difference. They are ultimately responsible to their constituents, and if constituents are not content with their elected officials' actions, they can put pressure on these officials and hold them accountable.

The tax plan has many concerning provisions, from raising taxes on graduate students and repealing Obamacare's individual mandate to allowing for oil drilling in the Arctic National Wildlife Refuge. If even one of these issues is important to you, and your elected official is planning to vote in favor of the bill, make sure to call them and urge them to change their mind.