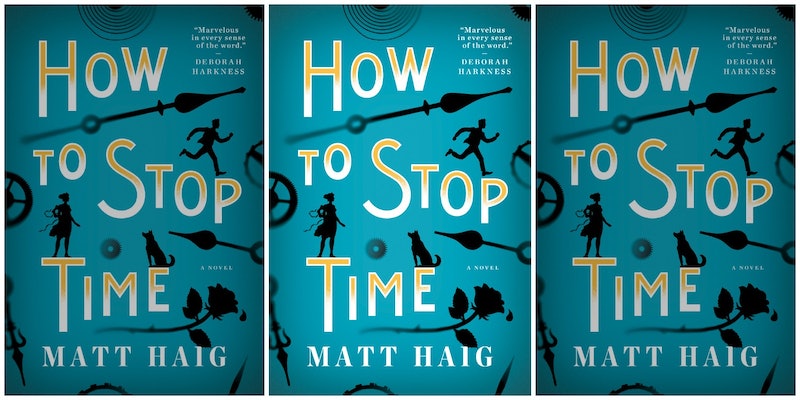 The first rule of the Albatross Society is that you don't fall in love. There are other rules, sure, but that's the most important one. Stick to that, and you can enjoy dozens of lifetimes however you please. But unfortunately for Tom Hazard, the protagonist of Matt Haig's wonderful new novel, How to Stop Time, staying out of love may not be as easy as it sounds.

Tom has a rare condition, you see, that makes him age slowly. He looks 41 years old, but he's been alive for centuries: rubbing elbows with the likes of F. Scott Fitzgerald, Captain Cook, and William Shakespeare. Only now he wants an ordinary life, back in London, as a history teacher. He certainly knows his history, after all. As Haig's novel unfolds, we are confronted with the exuberant and painful memories of Tom's past, as well as a budding romance in his present, and the secret society bent on keeping him in check.

Altogether, How to Stop Time is a clever, beautifully crafted novel about love, history, and the tangled mess that comes with trying to live a human life of any length. It hits the shelves on Feb. 6th, and Benedict Cumberbath is already slated to star in the film adaptation.

Matt Haig, author of the memoir Reasons to Stay Alive and five other novels, talked to Bustle about the challenges of writing a near-ageless character.

"From the start I didn’t want Tom to be ageless or immortal," Haig tells Bustle. "I thought it would be more interesting to have him age — and be mortal — but to do it on a different timeframe. That way it would be a way of putting real human fears and concerns under the microscope, by exaggerating dilemmas we all face — mortality, grief, how to live in the present, and so on."

Tom's slow-aging affliction of "anageria" may not actually exist, but Haig wanted to ground his story in something close to reality. "I wanted the condition to sound as realistic as possible," says Haig, "So I took the science from a real life condition — progeria — where people age too quickly, and reversed it."

He also wanted Tom's run-ins with history to feel real, which meant an awful lot of reading on his part. "I had to do a lot of research," says Haig. "It would be great to say I had an immense wealth of knowledge to start with but — even though I have a degree in history — most of it was irrelevant for the social periods I was writing about."

Unlike an ordinary work of historical fiction, How to Stop Time weaves together moments from across the centuries and across the globe. "There are about fifteen different time periods in the book so it was like researching fifteen different time periods in one," says Haig. "And starting off, there were many — such as Arizona in the 1920s — that I knew next to nothing about. So, there was a lot of reading, and a lot of social history."

The biggest challenge with all this research turned out to be knowing when to stop. "I would say the historical research was the hardest bit. Not the actual research itself, but finding a way to wear it lightly," says Haig. "I had to reach a point where I had to not be obsessed with accuracy, and focus on being true to the story. And that took a while."

Haig's process for How to Stop Time was also a bit unusual, compared to his other projects. Just after finishing the second draft, he found out that his time-hopping tale was bound for the big screen. "I would say the most fun bit was the third edit. I normally hate editing but this was different because—some time after I finished the second draft — I found out that Benedict Cumberbatch wanted to buy the film rights," says Haig. "It was very surreal. I think my UK publisher had given him or his production company Sunnymarch an early version to read. Anyway, when you are neurotically working on your edits there is no confidence boost like hearing Benedict Cumberbatch wants to play the main character. Especially as I was picturing him as Tom in my head anyway. So yes, my third edit was done with a lot of confidence."

Even if you don't have a firm image of Cumberbatch in your head when you read about Tom Hazard, Haig wants his readers to be able to share in the joy he found while writing How to Stop Time. "I hope firstly that they enjoy the story as much as I enjoyed writing it. I also hope it helps them think about time and the transient nature of life a little bit," says Haig. "I think entertainment and thought are often placed in opposition but I think a book can contain both."

This book, in particular, balances the highs of love and historical shenanigans with the very relatable lows of isolation and anxiety. "I wrote this book drawing a lot on my own experience of mental illness —specifically depression and anxiety — and the idea of living with a secret, invisible condition and feeling detached from the world was one I related to," says Haig. "That desire to reconnect, that Tom feels, is similar to the process of recovery for me. A way to be alive again and come to terms with pain. And maybe some readers will relate to that too."

Readers will also relate to Haig's desire to road trip through history and take in the sights. "From ancient Mesopotamia through to Woodstock there is a lot I would have liked to witness," says Haig. "Many of the historical periods in the book — Shakespeare’s England, New York in the 1890s, Paris in the 1920s — would definitely be on my list. In a way, this book was my personal time machine. I was going where I wanted to go. "

And if you'd like to join him on this time machine journey, pick up How to Stop Time for a delightful tour of love and loss throughout the ages.