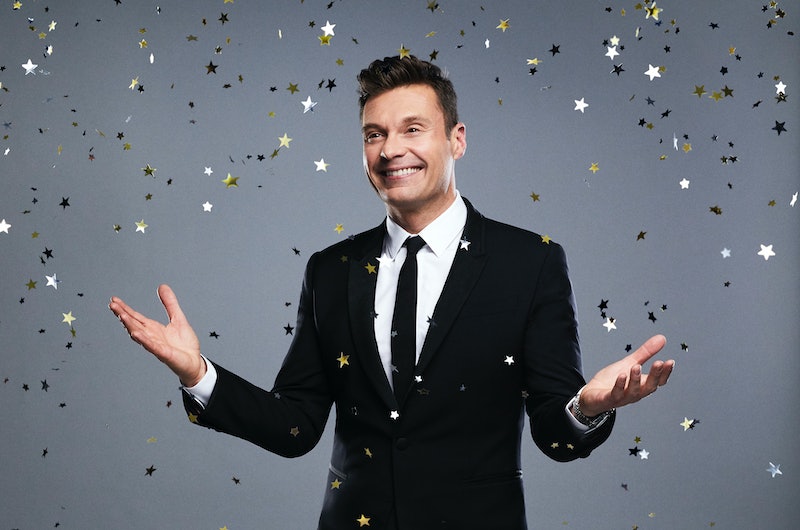 New Year's Eve is on the horizon, and while you could go out, you could also stay in, avoid the chaos, and stream Dick Clark's New Year's Rockin' Eve with Ryan Seacrest at home. The 2020 festivities kick off at 8 p.m. ET on ABC. But even if you don't have a TV, there are a few other ways to watch the ball drop at midnight.

As always, Seacrest will be holding down the fort in Times Square, where he'll be joined by his co-host Lucy Hale. Ciara will helm the West Coast portion from L.A., while Pose actor Billy Porter will be stationed down in New Orleans, where Hale hosted the celebration for the last three years. But while she has plenty of experience, the Big Apple's iteration is on a much bigger scale than what Hale is used to. The upcoming Katy Keene star told Billboard that there will be about 10 times the crowd in NYC than at her previous hosting gig. "But I think the last few years has really prepped me for everything that goes on behind the scenes, and Ryan has been super welcoming," she said, "so I'm feeling confident right now."

This year's headliner is Post Malone, while BTS, Megan Thee Stallion, Kelsea Ballerini, Green Day, Alanis Morissette (with the cast of Broadway's Jagged Little Pill), and the Jonas Brothers, among others, are all slated to perform. Here are a few ways you can tune in to watch them and help ABC ring in the new decade.

Those who have a cable log-in can watch Rockin' Eve by logging into the ABC website or the network's smart TV app.

If you're subscribed to a live TV service like Hulu Live, Sling TV, or YouTube TV, you can stream ABC's broadcast on your preferred device without cable.

According to Rolling Stone, you can also watch the Times Square livestream from any number of sites, including the official Times Square page, timessquareball.net, and at this Vimeo livestream link. Although this likely won't include Seacrest and ABC's coverage, you'll still see the ball drop.

If the above options don't work for you, you can still stay up-to-date on the festivities via the New Year's Rockin' Eve Twitter account and the #RockinEve hashtag.

Whatever your preferred method, there's a way to watch at least some of the celebration and live vicariously through those who dared to venture outside their homes.