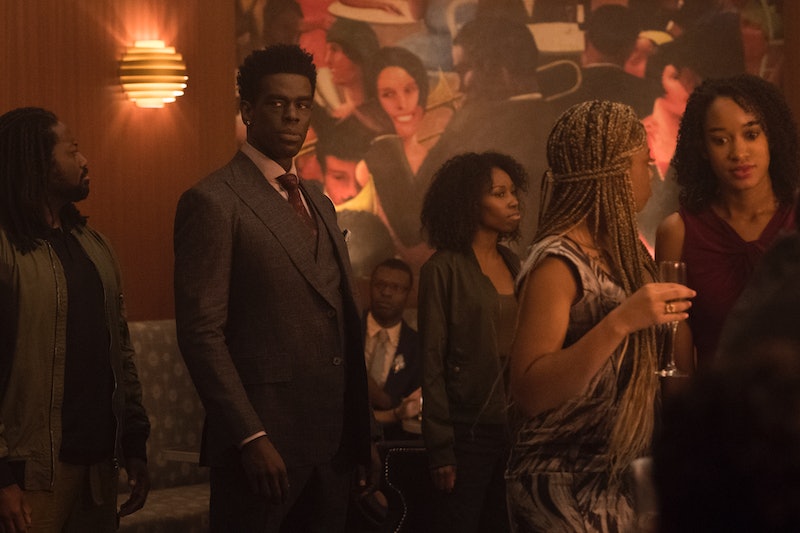 One of the most iconic images from Luke Cage Season 1 was Cottonmouth (Mahershala Ali) standing in front of a Biggie Smalls painting, the rapper's crown framing the villain's head perfectly. Scenes like this prove that music is an integral part of the Netflix Marvel show, and the Luke Cage Season 2 soundtrack seeks to follow in the footsteps of its predecessor, which featured a score written by A Tribe Called Quest's Ali Shaheed Muhammad and composer Adrian Younge. Ahead of the show's second premiere on Friday, June 22, fans are looking forward not just to the next chapter of this Marvel series but also the show's impressive list of musical guests.

Since the superhero show is set in Harlem, the birthplace of jazz, several hip-hop and jazz musicians were involved in the creation of Luke Cage. In addition to Muhammad and Younge's score, the soundtrack of Season 1 also featured music by Faith Evans, Jidenna, Sharon Jones & the Dap-Kings, and Charles Bradley.

Not to mention that many of the artists on the soundtrack also appeared in person on the show itself, between Sharon Jones & the Dap-Kings performing at Harlem's Paradise in the Season 1 finale and Method Man (of the Wu-Tang Clan) making a cameo as himself in one particularly funny scene. In fact, Luke Cage showrunner Cheo Hodari Coker views Season 2 as a sophomore album, telling BET:

“You know with me everything is music, everything is hip-hop. So my question is, how can this season be the sophomore album that elevates things? My whole goal before we started anything was I wanted to make this season Low End Theory, The Score, Death Certificate…that second record.... Yes, it is a television show, but frankly it’s a bulletproof version of [Beyonce’s] Lemonade. It’s one big concept album. When you see how we use music and how it flows with the dialogue and characters, it’s basically like watching an album.”

As for the Season 2 soundtrack, Marvel Music announced via PR Newswire that they would be releasing the album alongside the show on June 22. And the lineup sounds incredible — Muhammad and Younge are returning once again for the score. In addition to licensed songs, there are also original tracks — some of which are performed in the show itself — by Joi ("Love You Forever"), Gabrielle Dennis, who plays Tilda Johnson in the show ("Family First"), Rakim, the legendary MC ("King's Paradise"), and more. And, per Den of Geek!, other artists on the soundtrack will include Gary Clark Jr., Ghostface Killah, Faith Evans, and Stephen Marley.

"If Season 1 was about the hip-hop and the Wu-Tangification of the Marvel Universe, Season 2 is about the ROOTS of hip-hop: reggae and the blues," showrunner Coker said in the same press release. "How both smashed up against each other to create the sonic backdrop of what we now know as hip-hop."

Indeed, Bushmaster (Mustafa Shakir) is the new supervillain in Luke Cage Season 2, who is Jamaican. His character is where the reggae aspect will come into play for the score — the two composers described the theme they wrote for Bushmaster as "symphonic reggae," per the release.

"The music selection and the sequencing is a labor of love, and is one of the most important things I do as showrunner of this show," Coker continued. "I love the fact that all of musical sensibilities meld with our storytelling and dramatic desires as a writer's room, cast, and production crew."

Per the press release, the Season 2 soundtrack will be available to download and stream, so it will likely be available on platforms like Google Play, Apple Music, and Spotify (the Season 1 soundtrack is currently on Spotify). And if the new Luke Cage soundtrack is anything like the previous album, audiences are sure to have it on repeat for weeks to come.