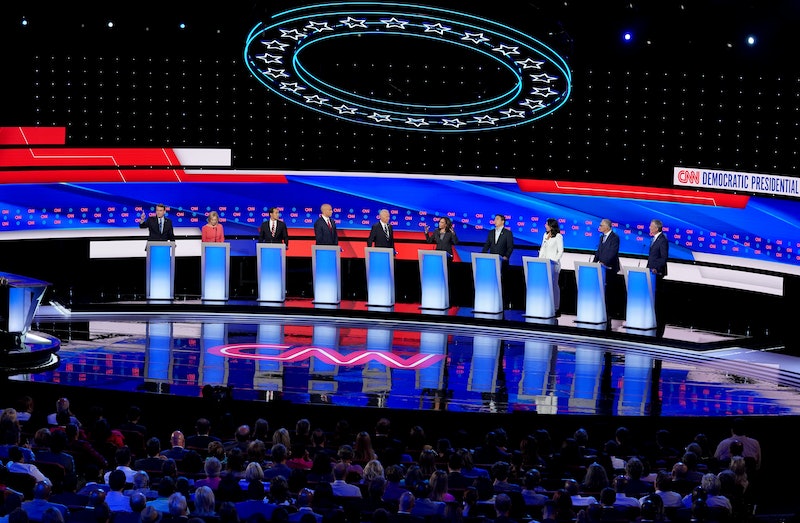 There's a long road to the 2020 presidential election, and on Thursday, another piece of that journey will fall into place. On September 12, the third Democratic primary debate will be held and will feature ten candidates. Of course, it will air on TV, but if you're looking to stream the September 12 Democratic debate, that's an option, too.

The debate is being held by ABC News and Univision, with George Stephanopoulos, David Muir, Linsey Davis, and Jorge Ramos serving as moderators, and will take place at Texas Southern University in Houston. Obviously, it will air on both ABC and Univision, with Univision including a Spanish translation.

Outside of the actual TV channels, though, the networks will be providing other viewing options. As ABC's site explains, it will be livestreaming the event on ABC News Live, which is available on Roku, YouTube, Hulu, AppleTV, Apple News, Amazon Fire TV, Facebook, Twitter, the ABC website, and the ABC app. Univision will also stream the debate on its platforms, including YouTube, Facebook, and Periscope.

So, yeah, there are a lot of options, ranging from just turning on a TV to knowing how one of those many apps works.

Now that you know where and how to watch the debate, here are some basics on what you'll be getting into. The September 12 debate will be the first Democratic primary debate for the 2020 election that will take place on only one night. The first two debates saw the candidates split up into groups based on their polling numbers, because there are so many of them.

According to ABC News, to participate in the debate "Candidates must receive 2% or more support in at least four national polls, or polls conducted in the early-voting states of Iowa, New Hampshire, South Carolina and/or Nevada."

They also "must have received donations from at least 130,000 unique donors over the course of the election cycle, with a minimum of 400 unique donors per state in at least 20 states." (More details on the requirements can be read here.) If more than ten candidates had qualified based on these rules, the debate would have been split into two nights yet again.

This debate will only put us halfway through the Democratic primary debate schedule. As shown on Vox's full election schedule, there are also debates planned for October, November, and December. Full details on all of the events are not available yet, but the October debate has already had 11 candidates qualify, as reported by FiveThirtyEight.

The Iowa caucuses aren't scheduled until February 3 and the New Hampshire primaries are set for February 11, so there is still plenty of time before voting kicks off. Until then, expect a few more debates and some more candidates to call it quits.