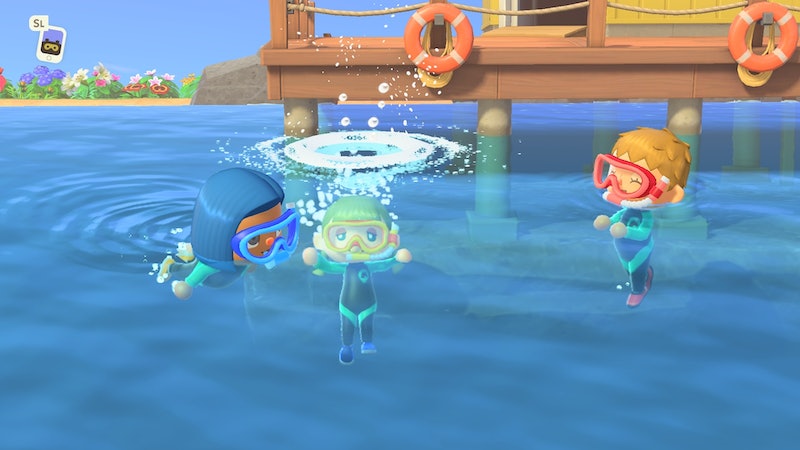 First introduced in 2012’s Animal Crossing: New Leaf, players had the ability to swim in the ocean for deep sea creatures. You’d expect this to be an even bigger feature in New Horizons, but swimming in the sea was noticeably absent at launch. That was until June 25, when Nintendo announced that the next free update for July 3 will give players this sought after opportunity. So here’s how to swim in the sea in New Horizons, because it brings a whole lot more to the game than you may think.

All it takes is a wetsuit for you to explore the crystal blue depths of your island, and you’re good to go. While the controls weren’t shown in the trailer, in New Leaf you press A to enter the ocean from the beach, the pier, and cliffs. In the water, you repeatedly press A to swim faster, and Y to dive underwater to catch deep sea critters if you happen to be over a shadow. Judging by the animations shown and their similarity to New Leaf, it’s more than likely it’ll be the same set up in New Horizons.

Museum curator Blathers will be very interested in these finds, and will accept any new donations to the fish exhibit. And if you happen to discover a scallop, you’ll pique the interest of Pascal, a red and yellow sea otter who loves these saltwater clams. In return for scallops, he’ll give you all matter of recipes, including new mermaid-themed DIY recipes as shown in the update trailer.

Gulliver will also receive a makeover in this update, now taking on the appearance of a pirate rather than a sailor lost at sea. According to a press statement, if you wake Gulliver in this outfit he’ll “send a special reward to show his gratitude” — which one can only guess will be pirate-themed.

This update will be followed by another in early August, which some players reckon will be linked to the fireworks festival in New Leaf, which happens every Sunday. And seeing since the update card in the trailer features fireworks, I’d say that’s a pretty safe bet.