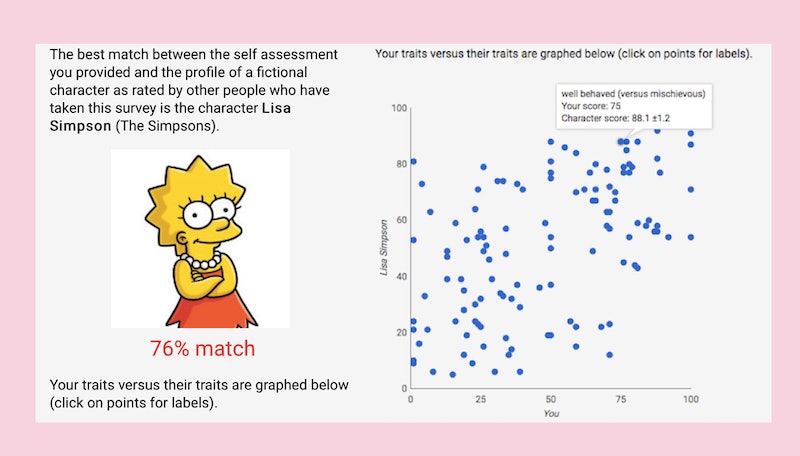 You know those personality quizzes on BuzzFeed that everyone loves to use to kill time at work/feed their narcissism? Well, now that so many of us are not at work, there’s a new quiz in town. Claiming to be a “scientific but still silly” approach to the ever-popular medium of online quizzes, the Statistical “Which Character” Personality Quiz going viral on Twitter takes a little longer than those BuzzFeed quizzes, and the results are maddeningly specific. The questionnaire determines which character (duh) you are out of a wide swath different entertainment universes, like The Office, Star Wars, and more.

The results have people feeling attacked. “My results of that tv show character personality quiz thing ARE KILLING MEEEEEE,” one Twitter user wrote. “I haven’t watched half of these shows but... f*cking Phyllis??? PAM? MARGAERY WAS EVIL.”

The test’s quote-unquote scientific approach asks you to rate where you are on a scale between two adjectives that are meant to be binary — for example, “dominant” and “submissive.” As you slide toward one, the percentage rises for that word and falls for the other. And while I found some of the pairings weird and hard to call — "What percentage ferocious vs. pacifist am I?" is a question I didn't think I'd have to ask — others I definitely knew immediately. You can choose to do the recommended, random, or 121-question versions of the quiz, with an optional add-on at the end to help improve the accuracy of the quiz as a whole. If you're looking to waste a good 20 minutes, this'll do it.

At the end of the quiz, you get a long list of characters, the show they're on or movie they're in, what percentage match you are to them, and then a scatter plot of how your results track with theirs. And this is where the "science" comes in. According to the homepage, each fictional character's "assumed personality" is based on an average rating of how volunteers rate 30 characters on one trait each. "With enough data, all the individual surveys can be combined into a comprehensive database of assumed personality," the site explains.

When I finally got my results, my top two matches were Salvatore Romano from Mad Men and Damian from Mean Girls. Both made me chuckle, but I’m not going to lie: A couple of names down the list cut a little deeper. (Looking at you, Andy Bernard, number 23 at 70%.)

Ultimately, this “scientific” personality quiz is just as fun as the BuzzFeed ones. It also takes significantly longer, which is great if you've already cracked your sheltering-in-place jigsaw puzzle. Plus, who doesn't need a silly distraction these days?

More like this
On TikTok, Tinned Fish Date Night Is The Latest Viral Food Obsession
By Emma Carey
Why TikTok Is Flooded With Controversial Videos About "Pick Me Girls"
By Courtney Young
This TikTok Song About An Unrequited Romance Has FYPs In Shambles
By Emma Carey
Here's How To Get Your iPhone To Update Automatically Forever
By Emma Carey
Get Even More From Bustle — Sign Up For The Newsletter