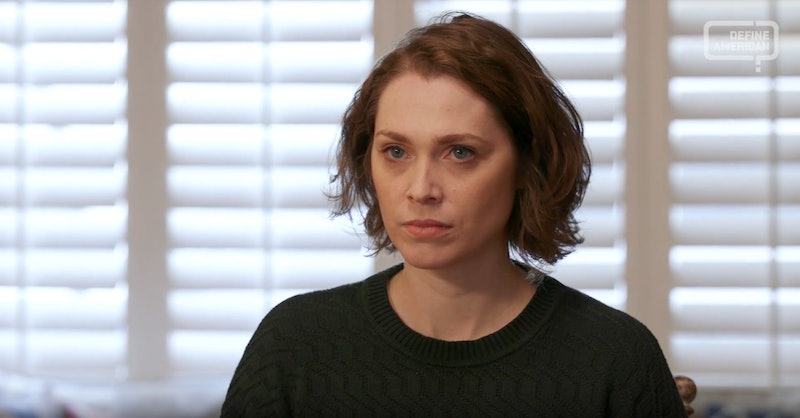 The holiday season is rapidly approaching, which means a series of get togethers, dinners, and parties (usually with mandatory attendance) where you might run into family members whose politics or general demeanor aren't quite... "woke," so to speak. On Tuesday, Define American, a nonprofit media and culture organization aimed at shifting the conversation about immigrants and citizenship in America, released a new video about how to talk about immigration issues during Thanksgiving and other holidays — just in case you're worried about things devolving into a food fight.

The video, titled "What Not to Do With Your Family During the Holidays," is centered around a white family whose daughter, Maggie, brings her Filipina friend, Maria, home for Thanksgiving. The conversation takes a turn when Maggie's uncle says something derogatory about undocumented immigrants. (Later, you'll find out that Maria is also undocumented.)

"I know he's ignorant, and I know it makes you mad, but you can control this conversation," Maria reminds Maggie in the video at one point. And that's what the video is here to do: Control the conversation, and help you get through to your relatives whose politics you might abhor.

Define American has five basic steps when talking about immigration to remember. First, use a story to emphasize your points, instead of trying to overload your family member with data. (There will be time for that later.)

"Say their names, and put Marty in their shoes," Define American wrote in a blog post about Marty, your fictitious cousin. The organization suggested stories from immigrants of mixed statuses that you can share with your family to put human faces to a discussion that can very often be abstract.

Next, actively listen to your family members. You're not trying to argue and win; you're working to change their minds. "This conversation can’t end with one side winning and the other losing. Maintain your attention throughout his point — stay with him," Define American wrote in a blog post. "Ask him questions, and repeat back what he has said to confirm. Don’t interrupt, let him collect his thoughts, even if you know you’ll disagree because after all, you ARE infallible."

It's also best to avoid name calling, according to the organization. Remaining calm in the face of racism might have the best outcome. A 2016 study found that a brief and frank conversation may be one of the more effective tools to reducing racist feelings, Vox reported. "Calling her a racist or xenophobe may feel justified. But if your goal is to reduce the amount of prejudice that a person feels, labeling them may have the opposite effect," according to the organization.

Finally, it's important to talk about a positive alternative and emphasize points of agreement. Define American recommended focusing on "the here and now" to anchor policy debates in real-life situations, instead of allowing spiraling conspiracy theories to dictate the conversation.

It's important to use these holiday conversations as starting points — especially if your family is white and/or new to conversations about race and immigration. "If you find enough ways to align, you’ll nurture a more regular conversation, and open each other up to a future that is brimming with possibilities," according to the blog post.

This isn't and shouldn't be a one-and-done process. And hopefully you won't have to turn into a literal monster to reach out to your family members. Happy holiday conversations!