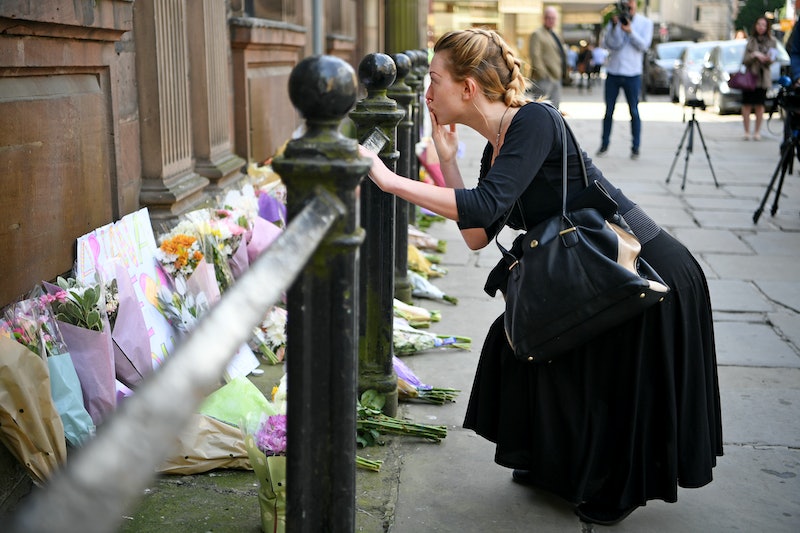 People around the world are still reeling from the deadly attack at an Ariana Grande concert in Manchester, England that claimed at least 22 lives and injured dozens more, according to the local police. It is never easy to explain to children how something horrible like this could happen, but with so many of the victims of the attack being teenagers and even younger, explaining the horror to them poses its own intense challenges. However, some experts have advice for what you can do to ensure that children handle the news in a way that protects them, without hiding them.

One of the most important things that mental health experts point to is the value of getting ahead of the story and being direct about it with children. "The first thing that I think is important is to not just hope they don't hear about it," Dr Lauren Hazzouri, a licensed psychologist and founder of HeyLauren.com, a community for women and girls focused on psychology and mental health, tells Bustle. "It's unrealistic, and then, you can't really control the message."

Hazzouri recommends starting with open-ended questions: "'Hey, did you hear anything about the attack at the Ariana Grande concert in Manchester?' And if they say no, then you [explain] and you completely control that message."

"It's important not to delay it or let things settle, but to really speak to them now when things are ripe on their minds," says Jonathan Alpert, a Manhattan psychotherapist and author of Be Fearless: Change Your Life In 28 Days. "Hear them out, let them speak. There's nothing irrational or that shouldn't be spoken. Validate their feelings. You really want to hear what they're worried about."

Experts say it's important to remain focused on how the child is dealing with the issue themselves, not how the parent or caregiver is thinking about it. And there has to be an important focus on tailoring the conversation to the age of the child.

According to Hazzouri, young children should have conversations focused on the simple facts of the attack — that it happened, that it's scary and sad, but that they are safe. On the other hand, older children, such as middle schoolers, can benefit from being given things they can do to deal with the problem and try to make things better. She brought up the example of patients that held bake sale for LGBTQ causes in the wake of the Pulse Nightclub shooting in 2016. "They feel a little bit of a sense of control in a situation where they have no control," Hazzouri says.

"Because children identify with other children, because there were more children that were affected, I think that this becomes more powerful for children"

One of the main ways that parents and other caregivers can help with these feelings of lack of control is through conversations about safety. Dr. Glenn Saxe, professor in the Department of Child and Adolescent Psychiatry at New York University's Langone’s Child Study Center, tells Bustle that "Part of what a child needs to understand is that the adults are doing everything possible to keep people safe, that it's very unlikely that an event like this will happen to you, and everyone is working hard to make sure people are as safe as possible."

The fears of children in this event may be even worse than normal in the wake of a terror attack, due to the specifics of the attack on a teen pop concert. "Because children identify with other children, because there were more children that were affected, I think that this becomes more powerful for children," Dr. Laurie Zelinger, author of Please Explain Terrorism To Me: A Story For Children, Pearls Of Wisdom For Their Parents, tells Bustle. "I think it ramps up their level of anxiety. It ramps up a parent's need to supervise to protect their children. When parents become more upset or affected by this sort of crisis, children read those cues."

Though parents can do their best in the aftermath of attacks to help their children handle the horror, the repercussions can be long-term. "Really recovering from something so sudden and violent like a terrorist attack really kind of takes a lifetime," says Terry Sears, Executive Director of Tuesday's Children, a non-profit that was founded after 9/11 to help children whose parents died in the attacks, and has since worked to help children worldwide who have been affected by terror.

But children are nevertheless quite resilient. And children who have grown up in the age of terror are in some ways able to deal with it better than their parents.

"It seems like this has become so much of what the climate is like and the environment they're growing up in that they don't know anything different," says Hazzouri. "It doesn't really seem to linger because it's such a part of their climate, and they're still okay. Just like we do with something like a terminal illness where we take precautions on a daily basis to make ourselves stay safe, I think we need to do the same thing with our kids in an environment where there's terror to make them feel safe in their own environment, recognizing that we can't reasonably predict unreasonable and unpredictable behavior."

More like this
The Beauty Device Kristen Bell Uses Every Single Morning
By Carolyn Steber
Watch Jacinda Arden’s Devastatingly Honest Resignation Speech
By Sam Ramsden
Ariana Grande & Kristin Chenoweth Sing A Wizard Of Oz Classic On TikTok
By Alyssa Lapid
Here’s Where The NHS Nurses’ Strike Currently Stands
By Sophie McEvoy
Get Even More From Bustle — Sign Up For The Newsletter
From hair trends to relationship advice, our daily newsletter has everything you need to sound like a person who’s on TikTok, even if you aren’t.