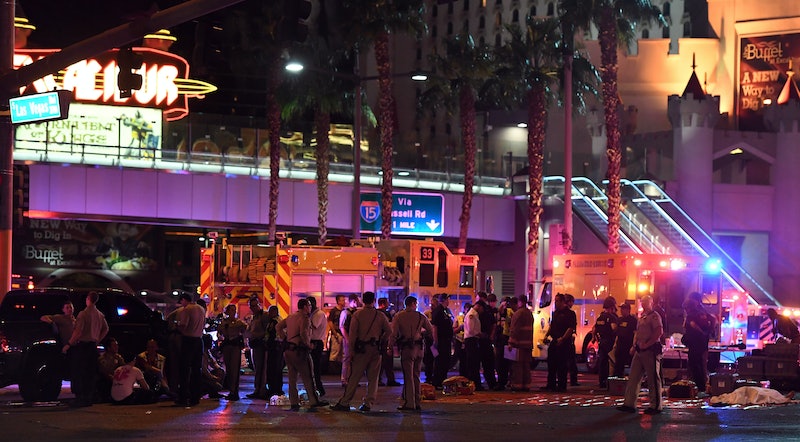 I was in fourth grade when the Sept. 11, 2001 attacks occurred. Our entire class, a rambunctious group of 11-year-olds, filed into a single meeting room led by our teachers, many of whom were on the verge of tears. We were the youngest grade to be notified, they said. It was a sign that we were being treated as adults. "Please," we were told, "Don't tell the younger kids." That was in 2001. Today, the pervasiveness of social media means adults are no longer the only ones shouldering the weight of mass trauma. Kids have access, too. Kids are watching. So how do we talk to children about the attack in Las Vegas? What do we talk about when we talk about violence?

When tragedies, especially large senseless ones like Sunday night's mass shooting in Las Vegas in which 58 were killed and over 500 were injured, sorting through feelings, let alone articulating them, can prove arduous. Conversations with peers can quickly devolve into shouting matches, because mass exhibitions of violence are never just about the crime. How do we speak with our children if we can barely make it through discussions with fellow adults?

Although reports are still coming through, here's what we do know about Las Vegas: It was the act of one shooter, who fired into the crowd at the Route 91 Harvest Festival from his hotel room on a high floor of the Mandalay Bay Resort & Casino. The first reports of shots came soon after 10 p.m. local time, while country music star Jason Aldean was onstage. The death toll currently sits at 58, with more than 500 transported to area hospitals. Already, it is one of the deadliest mass shootings in modern American history.

The shooter was found dead his room. Based on the shooting pattern, it's suspected that the shooter used at least one automatic weapon. The New York Times has reported that 19 rifles were found in his room, along with hundreds of rounds of ammunition.

Rightfully so, gun control advocates have taken to social media, calling, pleading, for a shift in the way we legislate firearms. Gun rights advocates have, for the most part, refused to engage, citing inconsideration for the families affected. Dana Loesch, a spokesperson for the NRA, suggested on Twitter that her opponents, "Offer a prayer & temper your desire for politics." Her pinned tweet, meanwhile, remains a call of resignation for a congresswoman who referred to the NRA as a terror organization.

In President Trump's official statement, he called the shooting an "act of evil," but refused to refer to it as an incident of domestic terrorism, despite the immense death toll.

So. How do we talk to our kids about... all of this? We spoke with Samantha Hatt, a pediatric nurse with a background in Emergency Trauma.