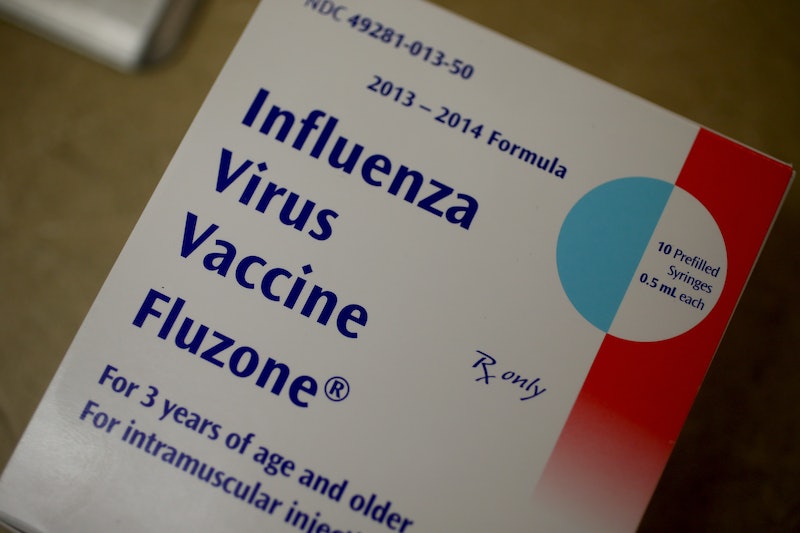 When you're cloaked in a quilt of kleenex, it's hard to process much else other than the fact that you feel sick. But it's important to figure out what's ailing you so the proper treatment can be prescribed. With so many similar symptoms that can only be described as "flu-like" you might be rolling around in bed praying to the WebMD gods for an answer: What's ailing you? Considering they're often mistaken for one another, when you're feeling flu-like symptoms, it's common to wonder whether what you've come down with is the flu or mono — and it's important to figure out the difference so you can properly recover.

The flu this year has made rounds on social circles around the United States so fiercely that group chats are more like quarantine zones. It's only safe to socialize through the phone for now. At least within my friend group where one buddy reported back to us, "DO NOT GO OUT THERE" from the confinement of her bed where she was nursing a bout of the flu. But, even if you feel flu-like symptoms, that doesn't always mean it's the flu. Other viruses, like mono, can often mimic the flu, and figuring out which you've come down with is important when it comes to treating it.

The Center for Disease Control and Prevention is, unfortunately, reporting that 2018 is host to the worst flu season on record in years. Yep: years. According to Fast Company, "the 2018 flu season is shaping up to be the worst on record since the CDC began keeping track in the early 2000s." All states are reporting continuous wide spread cases, expect for Hawaii. So if you were planning a mid winter break, Hawaii might literally be an escape from the harshest of winter's characteristics. If you are also one amongst the population with tissues glued to your nostrils and a bucket next to your bed and a supermarket's worth of electrolyte-filled water bottles on display next to your bed, you're not alone.

The Center for Disease Control's officially listed symptoms for the flu, also known as influenza — a respiratory illness, include, "fever or feeling feverish/chills, cough, sore throat, runny or stuffy nose, muscle or body aches, headaches, fatigue (tiredness), some people might have vomiting and diarrhea, though this is more common in children than adults." It's not pretty. To confuse your self-diagnoses, symptoms for mono, also known as Mononucleosis, has similar symptoms. According to Medical News Today, those include, "extreme tiredness, or fatigue, a high fever, a headache, body aches and muscle weakness, a red, sore throat, swollen glands in the neck or underarms, an enlarged spleen, rash." OK, so there are some major ways that could help you figure out if it's the flu or mono after all.

But the flu and mono are not alike. Mono is the initial illness that occurs after someone contracts the Epstein-Barr Virus — which most people become infected with at some point in life. It spreads through bodily fluids, such as saliva which is why it's commonly referred to as "the kissing disease." The flu, on the contrary, is picked up through infected surfaces and through the air.

The reality is that you might not know for sure which pesky virus you're infected with until you visit a doctor who's able to run some tests — especially if you're confused about your symptoms and feeling extremely fatigued. This way your symptoms can be diagnosed by a professional. And this way, you'll be on the right path back to health.